A statue of a black Civil War soldier was to be the centerpiece of a National Emancipation Monument that African-American residents of Springfield hoped would be erected in the city. 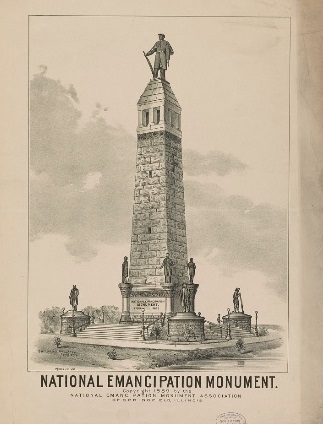 The effort, which lasted from 1889 to 1893, ultimately was unsuccessful, apparently because organizers couldn’t raise enough money. Planning, however, was well under way even before the project was announced.

The Springfield architectural firm of Bullard & Bullard, which designed the monument, called for the soldier statue to sit atop an obelisk similar to that of Lincoln’s Tomb in Oak Ridge Cemetery. Eight smaller statues of individual abolitionists were to surround the base of the monument.

Typical for the time, six of the eight were to depict white men: Abraham Lincoln and well-known (at the time) white abolitionists Charles Sumner, John Brown, Wendell Phillips, Owen Lovejoy and William Lloyd Garrison. The two African-Americans to be honored were orator Frederick Douglass and Robert Brown Elliott, who represented South Carolina in the U.S. House from 1871 to 1874. All the statues were to be crafted by Illinois sculptor Lorado Taft.

The monument’s design was unveiled in the Illinois State Journal in July 1889. The Journal said:

The summit will be crowned with a gigantic bronze figure, representing the colored soldier who left the menial work of a slave master and, acquainting himself with the practice of war, battled for the freedom of himself and loved ones. Three sides of the obelisk between the corner pedestals will be inscribed with the dates and historical incidents connected with the slavery of the colored race in North America.

The height of the monument to the foot of the crowning statue is 74 feet, illustrating the number of years of human slavery suffered under the American Constitution, from 1789, when the Constitution went into effect, until 1863, when by the power of the people human slavery was abolished in this noble land forever. …

Those who have originated and undertaken this work are worthy of the highest commendation. The magnitude of the undertaking and the many difficulties in the way of its successful execution would be sufficient to deter many who could hope to call successfully upon a larger and more prosperous constituency than that to which these colored men appeal. This undertaking by members of a race which but a few years ago was enslaved is, in itself, a monument to the progress they have made since they have enjoyed the blessings of liberty. …

The National Emancipation Monument Association was administered at first by Springfield residents – the group’s charter president was N.B. Smallwood (1817?-1908), who worked for the Lafayette Smith grocery business and was a Republican Party leader in the Fourth Ward. The association’s first fundraising efforts included outings and distribution of a flyer showing the planned monument (reproduced above). The Illinois House approved a $5,000 state contribution to the monument in 1891, but the funding was rejected in the Senate.

Later, the association broadened its membership and brought in a St. Louis physician, Dr. George W. Bryant, to direct fundraising. Bryant expanded the association’s appeals to the East Coast, setting up shop in Boston and holding at least one pitch meeting in Washington, D.C.

In May 1892, The Monumental News, a monthly pamphlet that reported on monument construction nationwide, said the local monument association had raised $49,000 toward a previously estimated construction cost of $200,000.  In 1893, several publications said a wooden model of the Emancipation Monument was to go on display at the 1893 World’s Columbian Exposition in Chicago.

If that happened, however, it seems to have gone unreported. In fact, the stories about the planned model are the last time the proposal was ever mentioned in contemporary newspapers. The main relic of the Emancipation Monument today is the fundraising flyer distributed in 1889.

This entry was posted in African Americans, Architecture. Bookmark the permalink.