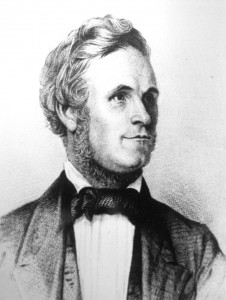 Col. John Taylor (1780-1849) was a pioneer merchant, land speculator and Sangamon County official, serving as the county’s first sheriff and as county treasurer during the 1820s. He was one of the four original proprietors of Springfield in 1824, along with Elijah Iles, Thomas Cox and Pascal Enos. Taylor also served for a time as land office receiver.

Taylor played a major role in Sangamon County’s partition in 1839 into four smaller counties – Sangamon, Logan, Menard and Dane (later Christian), a move prompted by his role in the founding of Petersburg in 1835. (Taylor hired Abraham Lincoln to re-survey the town in 1836. Markers on the Petersburg square commemorate that survey today.)  Taylorville, the county seat of Christian County, is named after John Taylor, who helped found it as well.

In John Todd Stuart’s later reminiscence, Taylor was identified as having a brick store and dwelling on the south side of Jefferson Street between First and Second streets (No. 6 on the reconstructed map of 1828 Springfield). A horse mill operated by Taylor at First and Jefferson had been abandoned earlier, Stuart reported.

Note: Col. John Taylor should not be confused with John Wickliffe Taylor, whose home in Springfield later housed the Home and Hospital for Fallen Women and the Ambidexter Institute.