Some of the earliest residents of Sangamon County were drawn here by people’s sweet tooth.

Robert Pulliam, generally considered the first person of European descent to move permanently to the county, first visited the Sangamo County in search of maple trees to tap for syrup. Other early explorers looked for bees, which were valuable for both their honey and their wax.

Samuel Williams (1800-87), in a speech to the 1870 meeting of the Old Settlers Society of Sangamon County, left a vivid account of his adventures as a “bee hunter.” 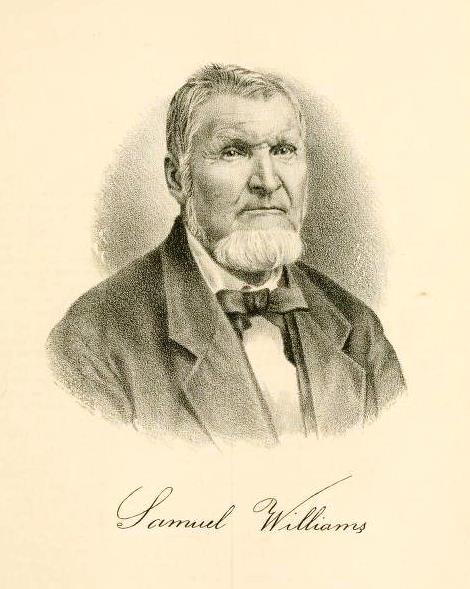 Williams, born in Vermont, came to Sangamon County with his parents, Elias and Mary Williams, in fall 1821. The family settled temporarily in the Sugar Creek area southeast of today’s Springfield. Williams later became a farmer, teacher and minister (he was one of the founders of South Fork Christian Church) in the Rochester area.

In early 1822, Williams and his father decided to hunt bees. Here is his story, as recorded in the History of Sangamon County, Illinois; together with sketches of its cities, villages and townships (1881).

… There were many swarms of bees here in the timber in 1822, not having been hunted out so early in this part of the State as the north part. Early this spring, my father and I concluded on a bee hunting excursion. Being ready, we put into a covered wagon two large new vessels, as a repository for honey, two or three buckets, some cooking utensils, provisions, corn for the oxen, axes, a tent cloth, some dressed buckskin and thread to repair torn pants, two or three books, etc. About the 10th of March, we started east. The first night, we encamped in the Buck Hart grove, the second night on Mosquito creek, opposite to the two mounds in the prairie. The next day being too cold for bees to fly, we passed on to the creek before spoken of, entering into the north fork from the south. Here we pitched our tent, and remained three or four weeks, not more than one or two days, or parts of days, in a week being warm enough for bees to fly.

My father usually kept camp, assisted in cutting trees, etc., but I did the hunting.

In the timber on this stream, I found thirty or thirty-three bee trees.

Here, on one very favorable day, I found ten, the greatest number I ever found on one day, the common average on good days being from two to seven.

We returned home with about forty-five gallons of honey and fifty or sixty pounds of beeswax.

Soon after our arrival at home I went to town to sell the wax, in company with two or three other persons. This was my first visit to Springfield. The south fork of the Sangamon was high. Here, for the first time, I saw Mr. Edward Clark and his brother Philip. They, with several hands, were busy preparing timbers for their mill. They sent over a man and their canoe to assist us in crossing. We had to swim our horses over by the side of the canoe, one at a time. When all was over we proceeded on to town. Mr. Elijah Iles was the only merchant here then; he kept his store in a log house, some distance northwest of what afterwards became the public square. I found him at leisure, he was quite social, and we soon made a trade, he giving me twenty-five cents per pound, chiefly in goods. There was not more than a dozen houses in town, if that many. In the fall, my father and I went out again to hunt bees, camping the first nights at the same localities as in the spring. We proceeded on slowly, hunting up the North Fork timber till we came to the place where we struck it when moving. The bees were not plenty on this stream; we found about forty bee-trees this time. My father was unwell here for several days, which detained us longer than we had anticipated.

There was much rainy weather at this time. During the first afternoon of our encampment here, a Pennsylvania Dutchman arrived at our camp on horseback, in a drenching rain. He was on his way to the Military Tract, to examine a piece of land. (The Military Tract of Illinois took in some five million acres between the Illinois and Mississippi rivers from today’s Rock Island County south to Grafton; sections of land were available free to settlers who had served in the War of 1812 – ed.) He passed the night with us, and seemed quite intelligent on general matters, but was much discouraged.

Looking down the bluff at the North Fork he enquired its name. On being told, he seemed much dejected and exclaimed, in his Dutch accent: “If that is the Sangamon river, of which I heard so much, I was badly deceived.” He was on the point of turning back for home when, from the number of his land, my father thought it might be valuable, and persuaded him to go and see it.

He went on and found it a valuable tract in the Ross settlement, about twelve or fifteen miles from the mouth of Spoon river.

He returned the day before we were intending to return home. He was in good spirits, now that his one hundred and sixty acres were valuable, and he intended to make his final home there. He was very thankful to my father for his advice, and in the morning, after breakfast, we bade each other a friendly adieu, he starting for his home and we for ours.

During all our travels of these two excursions we saw no white man save the Dutchman. On the fourth day of March, 1823, my father and I started east for another bee-hunt. The third day being warm, I found three trees on Mosquito creek, near its head. From this point we struck off to the right of the North Fork and found seventy trees on the first branches of the Okaw, or Kaskaskia, river. We cut forty and left three others to stand till fall. In August my father died, and in the fall one of my brothers accompanied me to cut the bee-trees left standing in the spring.

In the spring and fall of 1824, I went in the employ of Mr. Thompson to hunt bees. I think at the end of the season we came out even, finding one hundred and fifty trees each. If Major Iles has his old mercantile books they will show that Mr. Thompson and I dealt with him on a liberal scale in bees-wax. In all our hunting this year for miles up and down the different branches of the Okaw, we found no place where a white man had either settled or commenced an improvement. We admired much of the beautiful prairie situated on the east and south sides of the North Fork, and some situated on the Okaw; but we entertained no idea that one-hundredth part of what we saw would sell for Congress prices during a common life time.

So much in reference to bee-hunting, and the uninhabited country of Central Illinois, seen between the spring of 1822 and fall of 1824. …

This entry was posted in Early residents, Prominent figures. Bookmark the permalink.