Catharine Frazee Lindsay is remembered mainly as the mother of Springfield’s famous poet, Vachel Lindsay. But many of her son’s ideals and, perhaps, some of his literary talent were inherited from his indefatigable mother.

Catharine Frazee grew up in Indiana, the oldest of 12 children of Frances and Ephraim Frazee. Her father was a farmer and a preacher, something her son memorialized in one of his poems, “The Proud Farmer.” “The farm and house of God to him were one,” the younger Lindsay wrote.

Catharine Frazee was only 12 when she suffered a case of sunstroke that left her almost blind for seven years. Her vision was so bad that, in her senior year at Glendale (Ohio) Female College, she was forbidden to read her lessons. Her sister read them to her instead, and Frazee usually had to learn the material from a single reading. She still graduated from Glendale as class valedictorian and was hired to teach mathematics there.

With the gradual return of her eyesight and the help of a brilliant teacher, Sarah Birdsall, Frazee became proficient at painting, especially landscapes. As a result, a few years later, she was hired as teacher of art at Hocker College in Lexington, Ky.

Her life changed in 1875, when Frazee arranged to take a year’s leave to travel and study in Europe. Her companion was to be Eudora Lindsay of Kentucky, a student and substitute teacher at Hocker. Also planning to join them on the trip was Eudora’s younger brother, Vachel Thomas Lindsay, a Kentucky native who had established a medical practice at Cotton Hill near Springfield. Dr. Lindsay also was taking a year off to study overseas.

First, however, Dr. Lindsay had to pass muster with Ephraim Frazee, who wasn’t about to permit his daughter to take a trip with an unknown young man, whether or not his older sister was to be in attendance. Before the trio left, Ephraim Frazee required Dr. Lindsay to visit the Frazees for a personal inspection. He passed muster, and while abroad, Dr. Lindsay and Catharine Frazee fell in love.

They married upon their return and first set up housekeeping at Cotton Hill. A little while later, they moved into a house at Fifth and Edwards streets, the former home of Mary Lincoln’s sister and brother-in-law, Ann and Clark Smith, where they spent the rest of their married lives. (The home is now the Vachel Lindsay Home State Historic Site.)

The couple had six children – in order, Olive, Nicholas Vachel, Isabel, Esther, Eudora, and Joy. However, Isabel, Esther and Eudora – ages 7, 4 and 2, respectively – all died within two weeks of each other in 1888, the victims of scarlet fever. After their deaths, friends said, Catharine Lindsay never passed a baby buggy without stopping to admire the infant within.

Meanwhile, Lindsay took on a busy schedule of community activities. Many of them involved Springfield’s First Christian Church, where Dr. Lindsay and Catharine were members and where she taught the Adult Bible Class for almost 40 years. Lindsay also founded a study group called Via Christi.

However, her most prominent religious role involved her creation of the Women’s Missionary Social Union, which united the mission efforts of all of the town’s evangelical churches. That idea spread around the world, and Lindsay served as the union’s national president for 30 years. She traveled widely and wrote articles for national publications such as the Christian Century.

Beyond church organizations, Lindsay belonged to the Springfield Authors Club and Sunnyside Circle, one of the community’s leading women’s literary clubs, and was very active in the Springfield Woman’s Club and the YWCA.

Most of those groups met frequently in the Lindsay home, and few weeks passed without the Lindsays entertaining a house guest, hosting a discussion group or throwing a party.

And, like most wives of the time, Lindsay also handled household duties like canning fruit, making jelly and baking cakes. Friends who fell ill could count on Frazee appearing at their doorsteps with a jar of jelly or pot of soup.

Of her three surviving children, Olive and her husband became missionaries in China, Joy married and moved to Ohio, and Nicholas Vachel (known by his middle name) became a famous poet and civic visionary. 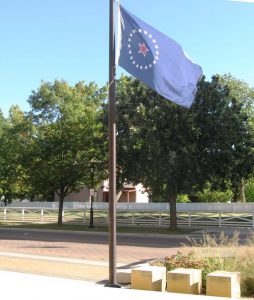 One example of how the mother and son shared similar philosophies is embodied by the Springfield city flag. The flag was one of Vachel’s ideas. He offered a $100 prize in 1917 to the person who came up with the best design. The flag, adopted in November 1917, includes a circle of 20 stars, representing the states admitted to the Union before Illinois. The outlined white star represents Illinois, and the red star within the white one stands for Springfield.

Although the flag still flies outside Springfield municipal facilities, it never attained the prominence both Catharine and Vachel had hoped for – that of a recognizable, universal symbol of the ideals of Abraham Lincoln.

On Lincoln’s birthday in 1921, Catharine Lindsay wrote an essay, “Springfield A World Mecca,” that was published in the Illinois State Journal. Here’s how it ended:

Let us hand down the Lincoln ideals to our successors. Let every building display our flag under the Stars and Stripes. When we visit other lands, let us wear for a pin or brooch a tiny American flag and Springfield banner set together.

By and by we will be recognized as a city representing the ideals of Abraham Lincoln – individual rights and respect for law – until Springfield becomes, in truth, the symbol of the underlying principles of a future world government, and the Mecca of the world.