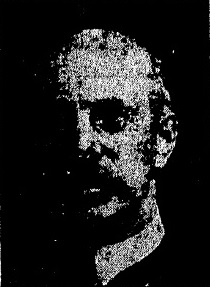 The position was part of the Springfield Police Department, and the humane officer had all the powers of any other police officer, but with the special duty of “investigating violations of laws for the protection of children and animals.” In practice, Stone and his successors took actions involving the poor, elderly and sick of any age.

Stone held the office until 1907, after which he and his wife operated the Hub European Hotel, 115 N. Sixth St. Stone died in Washington, D.C., in June 1911; as a veteran of the Civil War (133rd Illinois Volunteer Infantry), he is buried at Arlington National Cemetery.

Monthly reports by the humane officers illuminate ways in which “the good old days” weren’t at all good for many people and animals. As a sample, here is Stone’s full report for April 1904; it was published in the May 1, 1904, Illinois State Register (reprinted courtesy of The State Journal-Register).

The report of C.A. Stone*, the humane officer of Springfield, for the month of April, shows that there is much mistreating of animals in the city, and also not a little mistreatment of human beings. The report is as follows:

April 9 – Found poor old vagrant in alley; had him sentenced to a term in county jail. Found children in a bawdy house, took them before Judge Murray and warned the proprietor of the house to leave the neighborhood and discontinue business.

April 11 – Went to Home for Friendless and secured home for little girl; took drunken man from boarding house and locked him up; he was assessed the usual fine.

April 13 – Shot vicious dog; found team with hoofs worn to quick, took driver to horseshoer and made him have horses shod.

April 14 – Found six crow-bait horses in old shack of stable, one with sweeny in both shoulders and spavin in one hind leg; had to force owner to put under treatment, condemned another and sent to rendering works and ordered the rest better fed and stable cleaned. (“Sweeney” is shoulder atrophy; “spavin” is arthritis in a hind leg joint — ed.)

April 15 – Ordered lame mule from work to barn, where I received thanks of the owner and the driver was reprimanded; took four colored children before Judge Murray, who sent them to the Lincoln home for colored old people and children.

April 19 – Went the rounds of several coal mines and railroad yards, found little doing and no cases of overloading or other abuse of horses; had man before magistrate for abandoning wife and children, man promised to support them and case was continued to give chance to make promise good; ordered newly clipped horse to shelter.

April 21 – Arrested driver of a grocery wagon for overdriving horse, plead guilty and paid fine and costs ($7.14); took up case of girl enticed into the city for immoral purposes, case set for April 23.

April 23 – Case of girl before Judge Murray, girl held for future disposal; went to Lincoln and arrested man for enticing girl under age to city for immoral purposes, trial set for May 6.

April 26 – Condemned old crippled mule; warned driver for abuse of team and reported same to owner; lady telephoned she had picked up lost boy four years old, had him brought to station, where mother arrived before boy was brought in.

April 27 – Cut one-half pound wire from colored man’s shafts and harness and sent him home for repairs; warned driver for beating horses; went to fire at Little’s barn, where I got out the last horses left on the ground floor; afterwards went to Walnut and Monroe and had to shoot fine mare of Herman Pierik.

April 28 – Took sick colored girl to hospital; took woman and child from Refuge home and sent them to Rochester.

April 29 – Went to West Springfield to look after crippled horse, found horse in bad shape but receiving good care and daily improving in condition; had groceries sent to poor family.

April 30 – Sent mule to rendering works; investigated stock in pens without feed or water, ordered sent to pasture and lots cleaned up.