The Sazarac, a bar, restaurant and center for political intrigue, was a fixture in the 200 block of South Sixth Street in Springfield for more than a century. 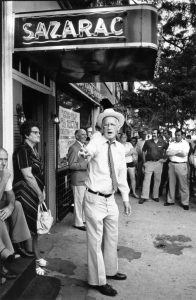 The Sazarac was on the west side of Sixth Street for most of its existence, but it first opened in 1870 across the street at 224 S. Sixth. The original owners were John Flood and John McNamara, although  John F. Wolgamot (1842-95) soon bought out McNamara. Illinois State Journal columnist John E. Vaughn recounted the bar’s early years in 1922, when the Sazarac was at 221 S. Sixth St. (Prohibition was in effect in 1922, so the Sazarac officially re-characterized itself as a cigar store and billiards parlor.)

(T)he real history of the Sazarac began with the opening of its door on Commercial alley, back of the existing front entrance on the west side of Sixth street. It was an alley saloon in those days. Most of the well-patronized downtown saloons were located in alleys – possibly in deference to public sentiment; possible because old-time bars were usually in the rear of a store; possibly because it was considered wasteful to give street front space to mere drinking places.

The Sixth street space afterwards incorporated in the Sazarac was occupied by John Booth, with a tobacco store. John Wolgamot ran the Sazarac and, incidentally, the Democratic politics of the Seventh Ward. It was one of the saloons where local politicians were made and unmade, though Fred Ballweg (1861-1915 – ed.), who succeeded Wolgamot, despised politics and would have none of it. His ambition was to have the best saloon in Springfield.

Ballweg spent thousands every year in new fixtures, elaborate furniture and cut glass for his back bar. It was his unchallenged boast that his stock of imported liquors couldn’t be excelled by any man in the business. Despite his aversion for everything political, the politicians continued to make the place a headquarters until saloon politics fell under the condemnation of the public. …

Old-timers tell of political intrigues which had their origin in the Sazarac in Wolgamot’s day. Here, they say, were laid the wires by which Alf C. Malone was made sheriff of Sangamon county. (Malone was sheriff from 1882 to 1886 – ed.) Here, too, was arranged the coup which retired Fred Gehring as alderman of the Seventh ward and made possible the election of John Phillips, a Republican. The ward was nominally Democratic and, under ordinary circumstances, election of a Republican would have been impossible.

Wolgamot was a man of much force, they say. He was able to combine and to manipulate, as no politician before his time, the sophisticated, overwise and rascally elements which could control the result of elections in the old Seventh. He was wise enough, too, to get out of the saloon business before it got him. When the Democrats came into power with the success of Grover Cleveland, he became a revenue agent.

In those days Harry Cusick was head bartender for Ballweg. He served the customers in the same particular way as the head of the Sazarac. All the help had to be spic and span, even down to the porter. Not a particle of dust was allowed to settle on the chairs and fixtures. No boisterous individual was permitted to enter. It was a place where men in state and local politics and the business world met to enjoy a bottle of wine or a drink of fine liquor and beer.

Also in 1922, an unnamed Illinois State Register reporter overwrote an article on the Sazarac’s new identity as a cigar store:

This extraordinary atmosphere of quiet subtly scented with perfume of the “best bourbon” that ever touched mortal lips made the “Sazarac” the mecca of the connoisseur, the dilettanti, the literati, the Beau Brummel, statesmen of renown and guest of the city who preferred the “Sazarac” and its choice brands to any of the hotel bars. Such illustrious men as Governors John R. Tanner, John M. Palmer and Edward F. Dunne have wandered through this land of smiles. Senators Evans and Humphrey, many representatives and an army of legislative attaches have often gathered there. …

In 1934, with Prohibition over, Fred Ballweg’s former employee Harry Cusick (1886-1954) left The Mill restaurant to buy out Carl Ballweg, Fred’s son, at the revived Sazarac. Cusick moved the saloon a couple doors south to 229 S. Sixth St., where it stayed for 45 years.

Cusick and his son Harold (1915-79) boasted of their ability to mix any cocktail; the bar’s slogan was “You name a drink and we’ll fix it.”

Harold and his brother Larry continued to operate the Sazarac following Harry’s death. Harold Cusick died in 1979, however, and the bar closed in 1980.

The former Sazarac space was vacant in early 2019.

According to Emil Smith, Fred Ballweg and Harry Cusick claimed the word “Sazarac” meant “cleanliness and quality.” However, the name seems actually to have been a variant spelling of the Sazerac, originally a combination of brandy, absinthe and bitters said to be one of the first cocktail mixtures.

The word would have been well known in Springfield when John Flood and John McNamara founded the Sazarac bar, because Jacob and John Bunn’s grocery regularly advertised in the 1860s that its liquor stock included “old Sazerac brandy.”

The Sazarac was far from Springfield’s only “alley saloon,” John E. Vaughn wrote in that 1922 column.

Nearby the Sazarac in its alley days were a group of saloons that vied with it in catering to politicians. George Thompson, who came to Springfield to open the lunch room at the Chicago & Alton depot (today’s Amtrak station – ed.), had one of them. Across the way was a saloon conducted by Ed Lanahan. There was a string of gambling houses in the alley. That over Thompson’s was among the last to go out of business when Springfield decided to run the gamblers out of town.

Other newspaper stories report that Commercial Alley, behind the 200 block of North Sixth Street, also was known as “Sazarac Alley” and “Gamblers’ Alley.”

This entry was posted in Amusements, Business, Hotels & taverns, Restaurants. Bookmark the permalink.