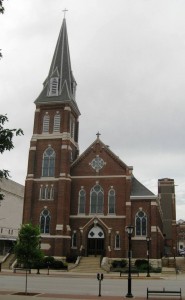 Trinity built a new, three-spired church on the Third Street site in 1860. However, maintenance problems – and the fact that the church opened onto the Third Street railroad tracks – led to the decision in the 1880s to find a new location. The present Trinity Lutheran church at Second and Monroe streets, diagonally across from the state Capitol, was dedicated in 1889. The last regular service in the German language was given in 1953.

Trinity also was closely associated with Springfield’s former Concordia Seminary, which operated northeast of downtown from 1876 until 1975.

This entry was posted in Churches, Education and tagged Lutheran Church. Bookmark the permalink.