The Hotel Abraham Lincoln opened in 1925 with 300 rooms, a five-piece house band, its own radio station, and lavish décor. And, it turned out, with lousy timing.

“The Abe,” which was on the southwest corner of Fifth Street and Capitol Avenue, is remembered today largely for the spectacular way it was demolished. At its opening, however, the hotel claimed, legitimately, to be “the show place of Springfield (and) the finest hotel of its kind in the middle west.”

When built in 1924 and 1925, the Hotel Abraham Lincoln was, at 12 stories, the tallest structure in Springfield. Construction and furnishing costs were estimated at $1.75 million (almost $25 million in 2018). 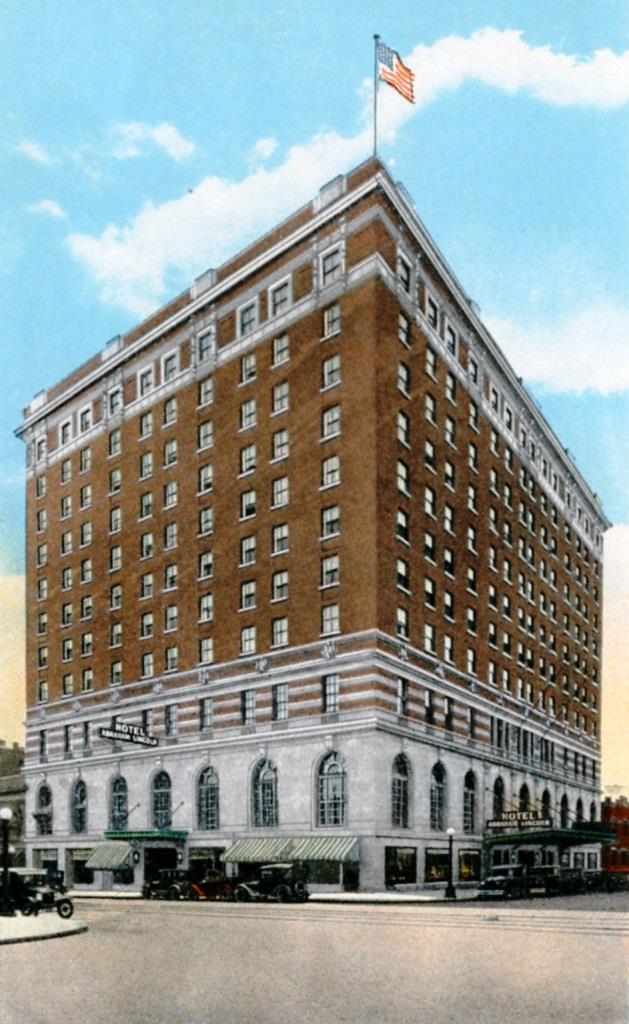 “Before completing the plans,” the Illinois State Journal reported, the hotel’s designers, Springfield architects Helmle & Helmle, “consulted with some of the best known hotel operators in the country and visited many of the newest hotels in the east.”

The results, according to the Journal, embodied “all the latest ideals in hotel design.” Marquees covered both the main entrance on Capitol Avenue and a side entrance on Fifth Street. Shops and stores occupied the ground floor. People reached the second floor, where the lobby, dining room and lounge were located, via a marble staircase.

The interior is designed in the Italian renaissance style with delicately ornamental plasters and columns. There is no division by walls between the lobby, lounge and dining room … (and) the lobby is free from columns, heavy beams spanning this portion. The ceilings of the lobby, lounge and dining room are of different design but of the same architectural style and reflect the purpose of the space below. …

The entire fourth floor is devoted to the ball room, palm room, private dining rooms, parlor suites and committee rooms. It is an ideal banquet or convention floor and fills a much needed want in Springfield. The ball room, decorated in ivory and gold, with brocade panels in the walls and an elaborate gold filigree frieze above a colonnade on each side of the room, is a charming setting for banquets and social affairs. The ball room and palm room can be thrown together and have a combined banquet seating capacity of about five hundred and fifty persons.

The building boasted three kitchens (one each for the cafeteria, dining room and banquet floor), its own water pressure system and a central vacuum. Rooms were cooled via an arrangement that distributed ice water through the building at a rate equivalent to the melting of 16 tons of ice per day. 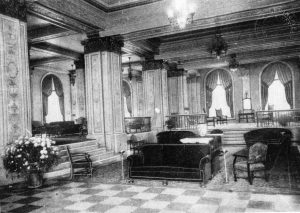 Around the table were comfortable davenports and lounging chairs, covered with the finest quality mohair and tapestries. … An abundance of table and floor lamps and high-back chairs covered with imported French fabric filled the lobby area. Dozens of singing yellow canaries lived in an ornately carved cage, their songs adding to the ambiance.

The hotel opened its rooms to the public on Sept. 18, 1925. More than 100 people signed the guest register that day, although the Florence Clough family of Chicago stole a beat, registering the night before. Thomas Williams, a traveling salesman from Indianapolis, was next after the Cloughs. The first permanent resident – in addition to transient visitors, some people lived at the hotel – were Mr. and Mrs. W.F. Workman; Workman was general agent for the Franklin Life Insurance Co.

Those first guests had to make do, the Journal reported.

There’s not a place to eat in the new hotel as yet, but the guests weren’t bothered by this in the least. They took things as they came, and were glad to do it.

“Why, I think it’s a privilege,” said one woman, “to be here the opening night.”

The main dining room, coffee shop and cafeteria are not expected to be opened until around October 1.

Not all the lobby furniture has arrived, but there are plenty of “comfy” overstuffed chairs and lounges to take care of the early guests. …

Springfieldians flocked down last night to give the place the “once over.” They just couldn’t wait, they insisted, until the formal opening.

The station reportedly was sometimes heard as far away as Lincoln, Neb., but, unfortunately, the signal was too weak to be consistently heard in Springfield. What’s more, federal restrictions barred the station from using a “portable microphone” to broadcast speeches and other events outside the hotel. As a result, WBBZ broadcast its last program on Jan. 10, 1926.

The Hotel Abraham Lincoln was the brainchild of C. (for Cecil) Hayden Davis (1885-1963), a former drug salesman and hotel owner in Beardstown. He got the backing of the Springfield Chamber of Commerce, which was already concerned about a supposed shortage of top-quality hotel rooms in the city, and the Mutual Life Insurance Co., a Springfield-based firm that owned the hotel site.

Mutual Life, headed by H.B. Hill (who committed suicide in an unrelated scandal in 1934), bought the first $300,000 worth of hotel stock. According to the Journal in December 1925:

At the close of the successful completion of the stock selling campaign – and in the face of many obstacles – the plans went steadily forward, and within a short time negotiations were completed by H.B. Hill and his associates for a bond issue in the amount of $700,000.

This completed the necessary financing and permitted the actual construction of the building to be started.

On July 10, 1924, ground was broken and the Hotel Abraham Lincoln began to take form.

Davis became managing director of the hotel, and he, his wife Mabel and son John Hayden Davis lived on the top floor for most of its 40 years in operation. At various times, Hayden Davis also invested in a Quincy hotel, a couple of oil companies, and the Ponce de Leon Springs resort area (now a state park)  in Florida. He also served, though only for two months, as director of the Illinois Department of Insurance.

The Hotel Abraham Lincoln achieved a measure of racial infamy via state Rep. Corneal Davis, an African-American legislator from Chicago, who often told how he was turned away when he sought to rent a room at The Abe when he first arrived in Springfield in 1943.

“The black orator … ended up spending the night on a wooden bench in the old Gulf, Mobile and Ohio railroad station and spent the next 10 years at a south side boarding house,” according to a United Press International story written when the hotel was demolished in 1978. (The same UPI story also claimed that acclaimed black singer Marian Anderson was denied a room at the hotel when she came to Springfield for the premiere of the movie “Young Mr. Lincoln.” The account is credible, given the times and the Corneal Davis incident, but it can’t be confirmed today. UPI also put the date of Anderson’s visit “several years” after the Corneal Davis incident; in fact, “Young Mr. Lincoln” premiered in Springfield in 1939.)

Among people who did stay at The Abe were presidents Herbert Hoover and Harry Truman. Wendell Willkie, the Republican candidate for president in 1940, and Richard Nixon, as the GOP’s vice presidential nominee in 1952, also registered at the hotel. Actress Tallulah Bankhead was another guest, and an entire delegation of Russian officials spent a week at The Abe while in Springfield in 1960 to study local industry and culture.

The Club Lido, the hotel’s nightclub, opened in 1933 and lasted into the 1960s. It even reopened for a few months in 1968, four years after the hotel itself closed.

Associated Press writer Larry Kramp reported in 1973 that in the 1930s and ’40, The Abe “had the reputation of a (haunt) for highstakes gamblers.”

In one of the poker and faro games at the Abe, it is reported one lawmaker lost two years pay.

Raconteurs still linger over the story of the niece of a former governor who was fired from her federal Internal Revenue Service job in the early 1930s after she frittered away $50,000 over three consecutive weekends at the faro tables.

In a similar vein, Illinois Auditor Orville Hodge maintained a suite at The Abe before he was sent to prison for embezzling millions of dollars from state accounts.

Owners of shares in The Abe got their first dividends on Christmas Day 1925. But indications are that the hotel seldom made money later – starting with the Great Depression, which began only five years after the hotel opened.

For many years, the suit charges, Davis has operated the hotel “for his personal benefit and the benefit of his family” and “to the exclusion of any consideration for preferred stockholders.” …

In the brief Davis and others in control of the hotel were said to be operating in a manner that is “illegal, oppressive or fraudulent.”

The Davis family nonetheless remained in control of the hotel. John Hayden Davis, son of the founder, was the managing director when The Abe closed its doors for good on June 29, 1964, the last day of that year’s General Assembly session (many lawmakers lived at the hotel when in Springfield).

An Illinois State Journal editorial said The Abe had “enjoyed its own special prestige that has touched the hearts of many of us.”

The warm and friendly hospitality of the hotel has been continued to its final days. The hotel has been noted for its accommodating employees, many of whom have worked there for many years. The present staff has maintained a fine tradition.

The building remained empty, except for the random vagrant, for another 14 years. Lawmakers defeated a proposal to convert the hotel to state offices on the grounds that the idea was simply a pork-barrel project for Springfield. A series of private initiatives also came to nothing.

Contents of the building were sold in a four-day auction in December 1968. Journal reporter Carol Coon described the bargains.

Some items on the auction block included an 8 by 10 foot picture of Abraham Lincoln and a mangle iron so large that the auctioneers agreed (it) must have been able to iron 20 sheets at a time.

A wall safe, full of records of persons who stayed at the hotel since it opened in 1926 (sic), went at bargain prices. Equipment in five kitchens also was sold.

Ornately carved wooden panels which adorned supporting columns in the lobby and elsewhere in the building went for $105. Marble used in stairs and floors sold for $30.

Tear-drop chandeliers in the ballroom sold for $240 for the entire lot. Everything had to be sold and was – from a mahogany banister and wrought iron balusters to barroom equipment in the Club Lido, to glass which encased the American Room.

The derelict hotel was demolished by implosion on Dec. 17, 1978. After decades of use as a parking lot, the site was slated in late 2018 to be transformed into a park.