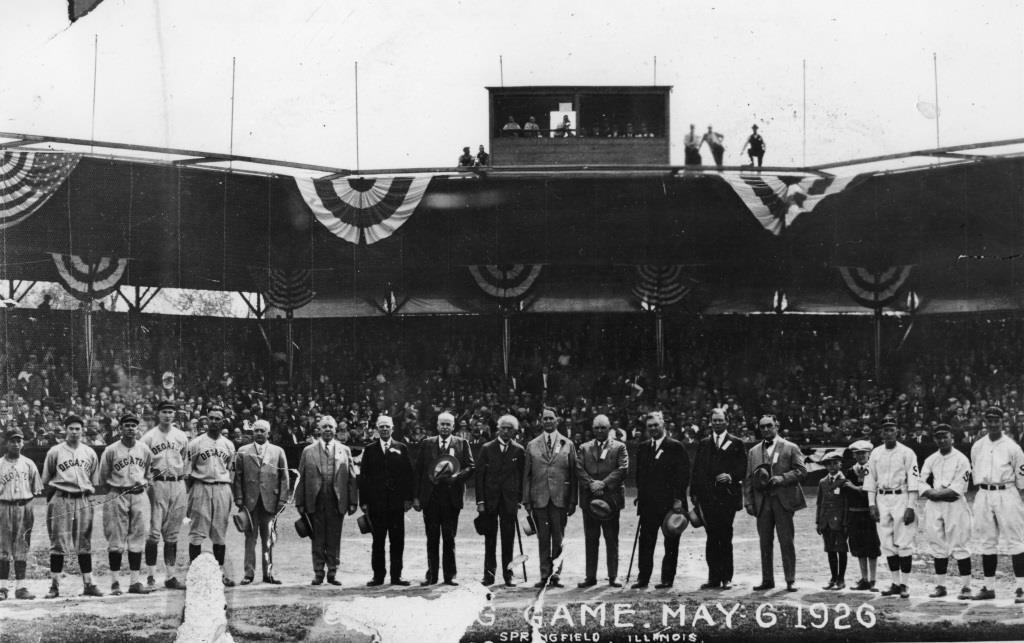 Dignitaries present for Opening Day 1926 included baseball commissioner Kenesaw Mountain Landis, who threw out the first ball. Landis is just left of center above, leaning on a cane. The man in the light-colored suit next to Landis appears to be Gov. Len Small. More than 8,000 people attended Opening Day. (Sangamon Valley Collection)

Baseball-mad Springfieldians got more than their money’s worth on July 20, 1926, both on the field and in the next day’s newspaper story.

The Springfield Senators, the local entry in the Class B Three-I League, outslugged the Peoria Tractors that afternoon by the unlikely score of 33-23. The two teams collected a total of 48 hits, 18 batters walked, and the Senators and “Trax” combined committed eight errors. Nine pitchers took the mound for the Tractors, while Springfield made do with only four.

Beyond July 20, the 1926 season was a banner year for Springfield’s minor leaguers. In only their second year in existence, the Senators won the Three-I championship with a record of 77 wins and 59 losses. (“Three-I” referred to Illinois, Iowa and Indiana, the states where the league’s original franchises were located. However, only Illinois and Indiana were represented in 1926.)

The anonymous sportswriter who covered the July 20 game for the Illinois State Journal probably deserved an award of his own, with a lead that parodied “Casey at the Bat.”

Somewhere a dodo bird is chirping. Somewhere horses sing over the radio and street cars do the Charleston.

Somewhere there is a bigger madhouse than Reservoir park became yesterday, but it isn’t in this world. Springfield won 33-23, but it’s a safe bet that five out of every six fans who staggered away from the park last night did not know the exact score. And the players – they probably didn’t care. …

Thirteen pitchers went to the plate, threw the ball over and ducked. Nothing short of a machine gun could have stopped the heat-crazed bludgeons. The batters? It mattered not who came to the plate, everyone who had a time at bat got a hit except a pitcher or two.

Manager Bill Rodgers of Peoria wore out a pair of shoes and nine hurlers, walking to and from the bullpen. After exhausting his supply of regular flingers, he called on Duffy, an outfielder, Trefzy, a catcher (and) Thomas, a first baseman.

“The survivors,” the story concluded, “are going to try to play another game today.”

Springfield was competitive in the Three-I League for several more years, although the Senators, and later the Springfield Browns, never won another outright championship. Financial problems forced the league to shut down in 1932. It revived and re-folded several more times over the next three decades, finally going out of existence in 1961.

Springfield’s final entry in the Three-I, the 1949 Browns, finished eighth, and last. Their attendance that year was just under 49,000, also last in the league.

Each Senator received a belt buckle commemorating the championship season. Among those players was pitcher Otto “Pete” Peterson, the last Springfield hurler in the July 20 game. (The box score indicates he gave up at least two of Peoria’s 23 runs.) For the season, Peterson compiled a record of 13-9.

Peterson married a Springfield woman, Alma Kienzler, retired from baseball following the 1928 season, and went into hotel management. But he wore his championship belt buckle every day for the rest of his life.

The buckle now is on display at the Springfield Sports Hall of Fame.

This entry was posted in Amusements, Social life, Sports and recreation. Bookmark the permalink.