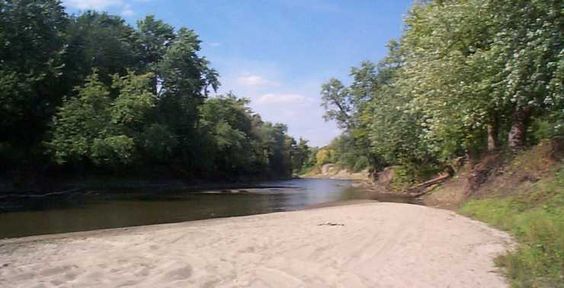 In 1831, a new Illinois county was formed from parts of Madison and Bond counties. The new county was named for the river that bisected it: the Sangamon.

The headwater of the Sangamon River is a small stream emerging from a farm field east of Bloomington in McLean County. This stream, now tiled, is the humble beginning of the river that played such an important role in the history of early Sangamon County.

There are more than a few theories about how the Sangamon River was named – the best-known claims the name means literally “where there is plenty to eat.” Scholars, however, agree with a theory Virgil Vogel developed in the 1960s: that the word “Sangamo” or “Sanguimont” originally meant “river mouth” – which makes the Sangamon’s name in translation “River-mouth River.”

The Sangamon wanders more than 200 miles through fields, villages and cities until it feeds into the Illinois River at Beardstown. However, the Sangamon drops only 400 feet along its length, making it a shallow, slow-moving river. It is also one of just a few rivers that flow north.

The Sangamon passes through Champaign and Piatt counties before swinging west to Macon and Sangamon counties and then northwest. The river forms the boundary between Mason County and the counties of Menard and Cass before it ends at Beardstown.

In the 1800s, many central Illinoisans hoped the Sangamon would be an important trade route to both the Illinois and Mississippi Rivers. Shallow water, dams and hazards like fallen trees, however, thwarted attempts to bring steamboats up the Sangamon from Beardstown. While some pioneers discussed dredging the river to make it more navigable, none of their proposals ever materialized. 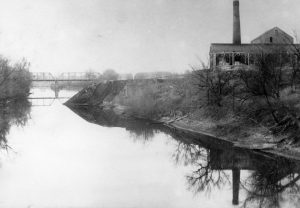 The Columbia Paper Mill overlooked the Sangamon River northwest of Riverton for decades. The facility also had been a lumber mill, furniture factory and distillery, The paper mill was demolished in 1903, and an electric railway power plant built there. (Sangamon Valley Collection)

Even with its shortcomings, the Sangamon proved to be a boon to area development. It provided transportation, power for the various grain mills, and water supplies for many towns and businesses. Springfield’s first public water system used the Sangamon as its source.

In March of 1831, a young Abraham Lincoln and a cousin, John Hanks, canoed down the Sangamon from Decatur to a point near Judy’s Ferry, now Riverton. They walked into Springfield. This was Lincoln’s first visit to Sangamon County and Springfield. Local entrepreneur Denton Offutt then engaged Lincoln, Hanks and John Johnson to build and pilot a flatboat loaded with goods down the Sangamon to the Illinois and Mississippi rivers to New Orleans.

The Sangamon River also provided recreational opportunities for early Sangamon County citizens. Swimming, fishing and boating were just a few of the activities provided by the river. In winter, ice was harvested from the river.

However, reservoir dams at both Decatur and Springfield greatly vary the flow of the Sangamon, at times making it impassable to even the smallest boats in the summer and flood-prone in wetter months.

More information: The Sangamon River: A Sense of Place, a documentary directed by Charles Schweighauser of the University of Illinois Springfield, can be seen on YouTube.