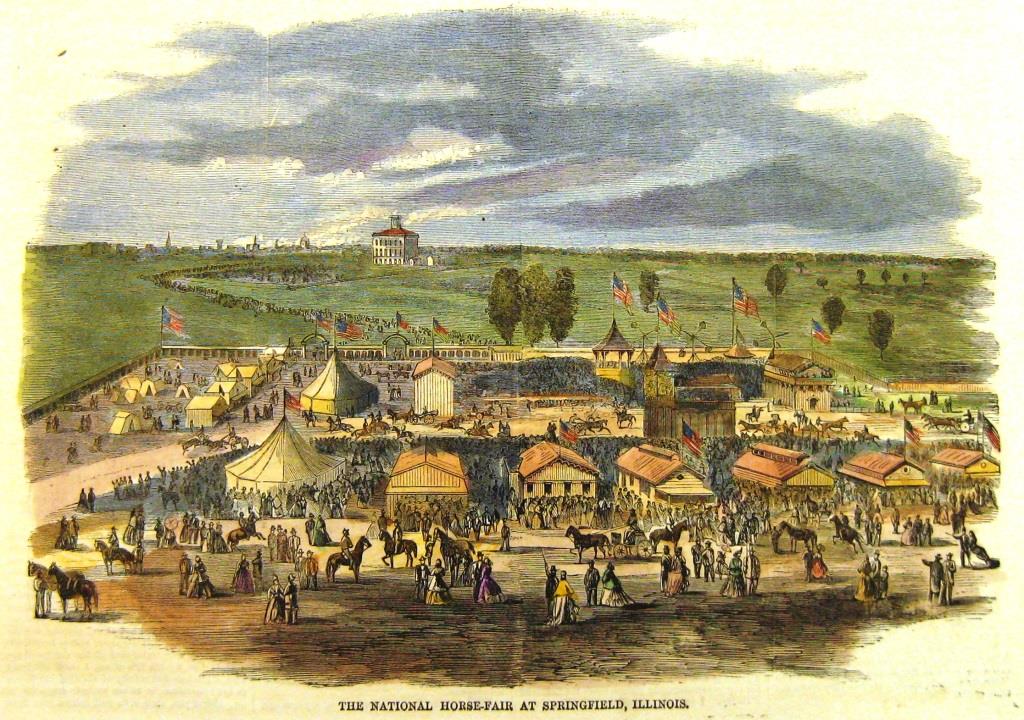 The Great National Horse Show in progress, as shown in Harper’s Weekly, Oct. 7, 1865. The building in the background is Illinois State University (not related to today’s ISU); the built-up area of Springfield is on the left horizon. (Sangamon Valley Collection)

The 11th annual Great National Horse Show and Equestrian Fair, held on the outskirts of Springfield in August 1865, was neither national nor, apparently, all that great. But it did draw Harper’s Weekly, the era’s most popular magazine, to central Illinois. The result was a colorful drawing of the fair that also illustrates how small Springfield was at the end of the Civil War.

The Illinois State Journal reported on Aug. 5, 1865, that “everything appears favorable for the largest Horse Show ever held in the West.”

Mr. Smith (J. Milton Smith – ed.), the efficient and energetic superintendent of the enterprise, is engaged with a large force of workmen, erecting the proper buildings, for offices, eating houses, etc., and is also constructing a large amphitheatre sufficiently extensive to contain several thousand persons. Other parties have commenced the erection of buildings for eating houses, sale of wares, etc., which, when completed, will be sufficient to accommodate the many thousands who will attend the coming National Horse Show.

The show ran Aug. 21-26, concluding with “an exhibition of lady drivers and a turf race for a prize of $300,” the Register reported.

The National Horse Fair … was brought to an end on Saturday last, after a successful existence of a week, during which thousands of our citizens, and those from a distance, visited the grounds. The satisfactory manner in which the exhibition was conducted, and the unprecedented pleasant weather rendered the occasion agreeable to all parties, and induced the attendance of stock owners from all parts of the state. 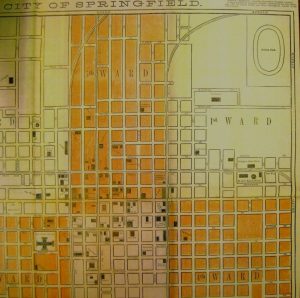 The Springfield show apparently was held at a racetrack built by the short-lived Springfield Racing Association northeast of what then was the built-up area of Springfield. The Harper’s illustration shows the only nearby structure was the building used by a Lutheran college then named Illinois State University (later Concordia Seminary; today, the Illinois Corrections Academy.)

The site now is occupied by the shuttered Pillsbury plant and the Illinois & Midland  railroad yards.

In a 2003 study, the late Charles “Chick” Chapin, a local attorney and horseman, found that the fair didn’t live up to the claims of its boosters. Chapin wrote:

It was “National” in name only; of about 80 horses entered more than half were from Springfield and Sangamon County. Neighboring counties Morgan and Christian provided about ten each. There had been heavy rains and many expected entries had not arrived, indicating that most had to be ridden or driven to the fair. Nevertheless, there were 4 from Chicago or Cook county, 2 each from distant Peoria and Scott Counties and another from Adams County, and 1 each came from nearby Macoupin, Logan, and McLean. Notably, 2 came from Kentucky and 1 from Indiana.

It was reported that the Amphitheater could accommodate “many thousands” of spectators. Successive daily reports that attendance was “improving” may indicate that the capacity was never reached and the tickets were never counted. So much for Harper’s report that more than 10,000 attended on the last day. There were said to be numerous booths for eatables and drinkables, most prominent of which was the Amphitheater Restaurant run by Hecht and Co. of Springfield. A cautionary note added that no intoxicants would be served.

The show’s main events included a variety of horse races – trotting, pacing, even walking.  Most, however, drew only two or three entrants, Chapin found.

The exception was a demonstration by “lady equestriennes,” of whom there were 10. Gov Richard Oglesby, chairman of the judges, “sagely announced they may not have judged correctly, but they had done their best,” Chapin wrote.

The winner, who received a $200 “diamond encrusted watch,” was Eliza Fassett. Her husband George, the owner of a livery stable in Chicago, was marshal of the horse show.

“Five volunteer fire departments entered the fire dept. race, all in uniform,” Chapin added. “This race was followed by one for St. Bernard or Newfoundland dogs in harness.”

Chapin’s three-page report and an original copy of the Harper’s Weekly article and illustration are on file at the Sangamon Valley Collection at Lincoln Library.

Hat tip: To the SVC’s Curt Mann and Stephanie Martin.

This entry was posted in Amusements, Illustrations, Maps, Spectacles, Sports and recreation. Bookmark the permalink.