Livestock moved out of the Illinois State Fairgrounds with the start of World War II, and soldiers moved in.

The U.S. Army Air Force took over the fairgrounds in March 1942 and operated a supply depot and training facility there for the next four years. The Illinois State Fair was cancelled for 1942, ’43, ’44 and ’45.

The facility, which ultimately was officially designated the 847th Army Air Forces Specialized Depot, was staffed by hundreds of AAF soldiers and hundreds more civilians.

The depot’s focus changed as the war went on. Originally, it was primarily a fuel storage area, with thousands of 55-gallon fuel drums stored near the grandstand. Training gradually became a larger part of its mission, although the facility remained a storage depot as well. 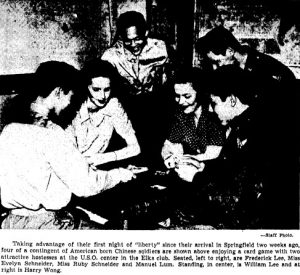 For part of 1943, about 150 Chinese-American soldiers, members of the 407th Air Service Squadron, underwent training at the fairgrounds prior to being deployed with Gen. Clair Chennault’s unit in the Burma-China-India theater of the war. Later, many soldiers stationed at the fairgrounds were taught how to refill oxygen cylinders used by Air Force fliers.

In October 1944, Lt. Col. W.T. Sing, then the depot’s commander, revealed that gliders used to carry Allied troops to the Arnhem, Holland, battlefield were shipped from the fairgrounds. According to the Illinois State Journal:

“The shipments were made possible only through the record setting pace maintained by the labor crews at the depot, with have resulted in commendation to this post by the air service command,” Lt. Col. Sing added, explaining:

“With an average of 96 workers on the job, one freight car was loaded with crated gliders every 12 minutes during one schedule and on one occasion the shipping pace was stepped up to loading a car every 8.9 minutes.”

Relations between Springfield and the depot were largely good. Depot soldiers marched in parades and reviews, officers spoke to civic groups, and local clubs and the USO sponsored dances for men stationed at the fairgrounds.

For a USO dance at the YMCA in June 1942, the announcement said, “young women from one to 200 on the approved list will act as dancing partners.” At another USO dance, held in 1943 at the Governor’s Mansion, an unwitting Cuban-American GI ended up with Mabel Green, the wife of Gov. Dwight Green, as his partner.

In March 1944, however, after a depot soldier was badly beaten in a downtown bar and following a sharp increase in the rate of venereal disease among members of the 847th, commanding officer Col. H.G. Woodward declared three downtown taverns off limits. Only intervention by Mayor John “Buddy” Kapp and other local officials kept depot leaders from banning soldiers from the entire city, the Journal reported.

“Those places ordered out of bounds have been hangouts for underage girls and several times we have had men report having been beaten up in the establishments,” the major stated.

“Venereal disease on this post has increased 80 per cent in the last month at this camp to give our station the highest incident rating in the United State in proportion to the number of men assigned here. We feel a responsibility to the parents of the men involved and therefore directed the order.” 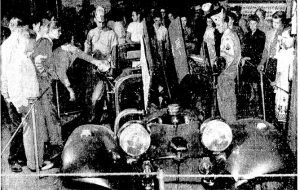 Depot activities wound down as the war ended, and the fairgrounds was officially decommissioned on May 1, 1946 – giving state officials just enough time to refurbish the grounds for the 1946 Illinois State Fair that August.

The 847th Army Air Forces Specialized Depot was one of four major military supply facilities in Sangamon County during World War II. Two of those, the Sangamon and Oak Ordnance Plants near Illiopolis, are the subject of a previous SangamonLink entry.

The fourth was the Lincoln Ordnance Depot, located on 472 acres generally between Hazel Dell and Toronto roads. The depot was designed to be one of the largest rail switching yards for storage and distribution of war supplies in the world. It was served by 22 miles of side tracks and included 2.5 million square feet of storage space, 1 million of that under roof.

One of the depot’s primary assignments was to ship finished ammunition prepared at the two Illiopolis manufacturing plants.

About 475 people worked at Lincoln Ordnance. The depot largely wound down operations after the war, but remained under federal control as a supply center for years. The site currently is an industrial park.