Peter Cartwright called himself “God’s Plowman,” referring to his 60 years of building Methodist congregations throughout the Midwest. 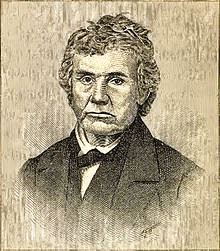 Cartwright (1785-1872) was already a successful preacher in Kentucky (his native state) and western Tennessee when he and his family moved to the Pleasant Plains area in 1824. His reasons for the move were economic and political, Cartwright wrote in his autobiography, but he also saw pioneer Illinois as a bigger challenge, one he was eager to take on.

I saw, or thought I saw, clear indications of Providence that I should leave my comfortable little home, and move to a free state or territory, for the following reasons: First, I would get entirely clear of the evil of slavery. Second, I could raise my children to work where work was not thought a degradation. Third, I believed I could better my temporal circumstances, and procure lands for my children as they grew up. And fourth, I could carry the Gospel to destitute souls that had, by their removal into some new country, been deprived of the means of grace.

The Cartwrights’ new home was, in fact, on the very edge of European settlement in the Midwest.

Sangamon county … had been settled by a few hardy and enterprising pioneers but a few years before. Just north of us was an unbroken Indian country, and the Indians would come in by scores and camp on the Sangamon river bottom, and hunt and live there through the winter. Their frequent visits to our cabins created sometimes great alarm among the women and children.

Despite the hardships of frontier life, the Sangamo country was fertile ground for a preacher of Cartwright’s talents and energy. As a circuit rider, his district covered two-thirds of Illinois.

“Thus the old hive has sent forth twenty swarms,” he wrote. “At the close of my second year I returned four hundred members, being an increase, in two years, of one hundred and sixty.”

Cartwright is estimated to have baptized more than 10,000 people and helped start hundreds of churches over his 60 years in ministry. He also was one of the founders of today’s MacMurray University in Jacksonville.

His sermons were always extemporaneous, anecdotal, and participatory. He was a master of charismatic domination and used it effectively to create the ecstatic conversion required to be reborn. He opposed the routinization and institutionalization of religion and favored the more democratic, egalitarian, and associational form of the frontier circuits.

According to the website Mr. Lincoln & Friends, “Cartwright was described in 1832 as ‘not tall, but burly, massive … And a head that looked as large as a half-bushel; bettwling brows, rough and craggy of fragmentary granite, irradiated at the base by eyes of dark fire, small and twinkling like diamonds in a sea.” 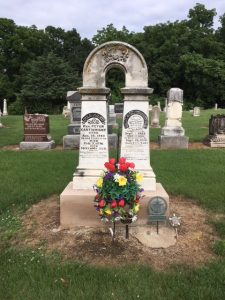 Another contemporary description said Cartwright, “full of wit and good humor … could entertain a crowd of one or one hundred. When he thought he was right no earthly power could persuade Cartwright to abandon a principle.”

Cartwright, politically a Jacksonian Democrat, was elected to the Illinois General Assembly twice, in 1828 and 1832. Among his unsuccessful opponents in 1832 was a Whig from New Salem named Abraham Lincoln; Lincoln later noted it was the only time “I have ever been defeated by the people.” In 1846, however, Lincoln defeated Cartwright for a seat in the U.S. House.

According to a transcript of the trial discovered in 1989, … Lincoln only had to ask one simple question and Cartwright was off and running. That didn’t matter. Far more important than the interaction between the two was the image of the longtime rivals helping each other, almost huddling together, to help Peachy Harrison. (Harrison was acquitted – ed.)

Despite their longtime political differences, Cartwright defended Lincoln in a speech in New York in 1862. Mr. Lincoln & Friends quotes Cartwright:

Once we were opposing candidates for a seat in Congress, and, measured up in the ballot box, I went down in defeat. But it was defeat by a gentleman and a patriot. I stand here tonight to commend to you the Christian character, sterling integrity, and far-seeing sagacity of the President of the United States. … I am confident that he is the man to meet and go forward in this crisis to lead his countrymen amid and through the terrible strife in which we are now engaged.

Cartwright’s legacy, however, remains his evangelization, not his politics. 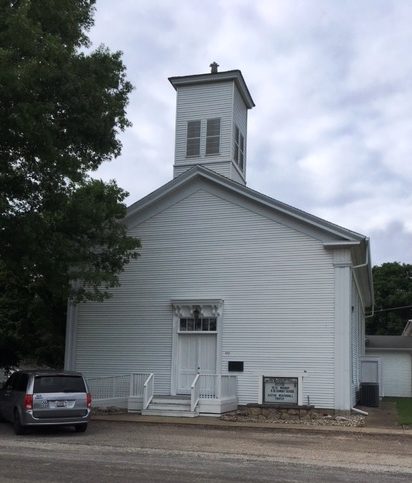 One monument to Peter Cartwright’s life as a preacher is the Peter Cartwright United Methodist Church in Pleasant Plains, constructed in 1857. Although the building has undergone two additions, the church sanctuary is nearly the same as in Cartwright’s time, and Cartwright’s pulpit is still in use.

Cartwright, his wife Frances and some family members are buried in the nearby Pleasant Plains Cemetery.