Fires that demolished swaths of the downtown square in the 1850s led – eventually – to Springfield creating a full-time fire department.

But city fathers first had to remedy another problem that plagued local firefighting efforts: a water shortage. 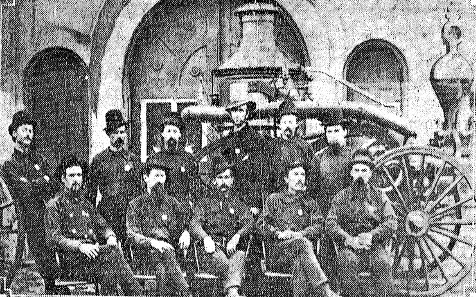 An “incendiary” – an arsonist – was thought to have started the first fire, which began between 1 and 2 a.m. on May 12, 1855 in the Clark & Henkle clothing store at Fifth and Washington streets. The blaze then swept south along Fifth Street and a short distance west on Washington. An Illinois State Journal story (a few words of which are unreadable from microfilm originals) described the damage.

The sun this morning rose upon a scene in Springfield, the like of which has never before been witnessed here. More than half the block of stores on the west side of the square, coming from the north, was in ruins, and the goods and furniture, not destroyed were scattered about, mostly on the state-house square, presenting further evidence of the melancholy catastrophe. This great destruction was, without (unreadable – ed.), the work of an incendiary. The fire was kindled among some boxes near one of the buildings, and such was the dry state of all the material about, that the buildings immediately caught fire, which as not arrested until nine (businesses?) and one or two other buildings of lesser consequence were destroyed. …

Clark’s Exchange Bank, which was fire proof, arrested the fire on the south, but for which, the whole block on the west side of the square would have been laid in ashes. …

The present is a very appropriate occasion to draw the attention of our city authorities to the necessity of providing more efficient means, than they have yet done, for the extinguishment of fires.

The fire apparently was fought by bystanders with buckets. Springfield had no fire engines and no public fire department. If any volunteer fire companies fought the 1855 blaze, they went unmentioned in newspaper stories.

City residents had made a couple of efforts to form volunteer companies – the Friendship Fire Company was operating in 1853 – but there’s no evidence that Springfield had any organized fire response system in May 1855. When a fire did minor damage to the Hawley & Loose store a few months earlier, the Register commented: “The citizens turned out on the occasion with their usual alacrity, and fully maintained their character for being the most efficient firemen to be found anywhere.”

(According to historian Paul Angle in his Here I Have Lived: A History of Lincoln’s Springfield, 1821-1865, Springfield had had a fire warden for several decades, and basic firefighting equipment – buckets, hooks and ladders – were supposed to be stored in the city market building. “But when the outbuildings of the City Hotel caught fire one night in the summer of 1850 every hook was found to be broken and not a single fire ladder could even be found.”) 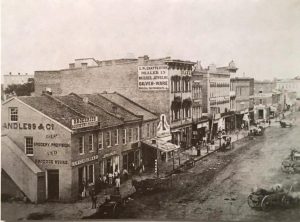 Rebuilt west side of the Springfield square, 1859 (Sangamon Valley Collection)

Most of the businesses displaced by the 1855 fire reopened quickly in new quarters, while reconstruction of the west side of Fifth Street started almost immediately. Within three days after the blaze, the Illinois State Register reported that two new buildings already were planned for the block.

“It will not be long before the site of the … smoking ruins will be covered by handsome buildings,” the newspaper said.

Visiting Springfield shortly after the fire, the unnamed editor of the Chicago Democratic Press was surprised at how Springfield had rebounded, according to an article reprinted by the Register.

Arrangements are now being made to rebuild in uniform style the side of the public square which was destroyed by fire a few weeks ago. The buildings are to be three stories high and fire-proof, and will add very much to the appearance of the business part of Springfield. Real estate in considerable quantities is changing hands, and at prices which rather astonished me. Vacant lots on the public square have found buyers at $200 to $250 per foot. …

The city council began to take action in July 1855, voting to issue $50,000 in bonds, $12,000 of which was to be used to buy “fire engines and other apparatus” and to build public wells and cisterns. (Most of the rest of the money was for construction of two public schools, a city hall and a public market.)

It still took until June 1857 for Springfield to acquire its first fire engine. Meanwhile, residents formed four (later six) volunteer fire companies. Each company had its own firehouse, used for meetings and to store equipment.

Also in June 1857, the city council enacted a sweeping fire code. Among other things, it required buildings in the business district to be clad in brick or stone, limited open burning throughout the city, gave city officials the right to do fire inspections and directed building owners to keep their chimneys clean.

The new ordinance also regulated the volunteer companies and established the position of chief fire engineer; he or his two assistants were to be in charge at all fire scenes. William Sands (??-1908), a plaster contractor and politician as well as firefighter, was the first chief engineer; his assistants were Thomas Mather and M.R. Kelly.

Fire company volunteers were exempted from having to serve on juries. Also, unlike other male city residents, they weren’t required to do unpaid street maintenance work.

“(B)ut it is doubtful,” Angle wrote, “if the young men who joined them were motivated by a desire to render a civic service as by the social pleasures they afforded.” The companies held frequent balls and parties, regularly marched in parades and hosted visits by fire volunteers from elsewhere. Contests to see which companies could pump water fastest and farthest were popular spectacles.

When Springfield’s Pioneer Company No. 1 hosted a visiting company, according to Angle, one of the guests of honor was Abraham Lincoln, who offered the following toast: “The Pioneer Fire Company – May they extinguish all the bad flames, but keep the flame of patriotism ever burning brightly in the hearts of the ladies.” 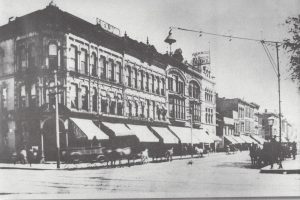 The new firefighting system wasn’t enough to save the east side of the square on the evening of Feb. 13, 1858, when another major blaze started in the William McCabe & Co. crockery store. That fire devoured six buildings along Sixth Street – almost half of the block – then turned east to destroy five more structures on Adams Street. (Among the demolished businesses on Adams was the barbershop operated by William Fleurville, Abraham Lincoln’s barber and friend. The shop was “of little value,” the Journal said.)

Had there been a sufficient supply of water at command, the fire would have been subdued with but little comparative loss. As it was, though the fire companies worked like heroes, and several times got the flames entirely under their control, yet at those critical junctures their water would give out, and they were compelled, with much delay, to seek some other place of supply. In spite of all the disadvantages under which they labored, they stood by their machines with indomitable resolution, hour after hour, all night long, and exerted themselves with a will and an energy which commanded the applause of all. No blame can be attributed the them; but there is great censure deservedly attached to the city authorities in not having public wells and cisterns sufficient for such emergencies. It is a public shame that this is so.

Springfield fire houses originally each had their own bells to warn residents of fires. They were all replaced by this tower , built in 1890 at the engine house on Fourth Street between Monroe Street and Capitol Avenue (Courtesy SJ-R)

The Journal took a look at the history of the Springfield Fire Department in its centennial edition on Nov. 8, 1931. When a fire broke out in the mid-19th century, according to the story, the volunteers first took water – which they pumped by hand – from the city’s five public cisterns.

Frequently, when those reservoirs were exhausted, trucks were backed into neighboring yards in the scramble to reach private wells and cisterns. Fences were broken and garden patches destroyed, in spite of the cries of outraged housewives.

The lack of water hindered volunteer firefighters for another decade. The city subsidized an effort to drill an artesian well near 19th and Washington streets in the late 1850s, but the project was abandoned after two years of work, 1,100 feet of drilling and $10,000 in expense.

Instead, city fathers decided in the early 1860s to build a municipal water works on the Sangamon River. “The desire for better fire protection is a key reason the water works plan gain strong public and political support,” according to City Water, Light and Power’s history of the water department. Construction began in 1866 and was completed in 1868.

When finished, the system sent river water to a 400,000-gallon reservoir on the site of today’s Lanphier High School and from there into pipes (and the city’s new fire hydrants) throughout the city. The river plant filled Springfield’s need for water – for homes, businesses and firefighters – for the next 30 years.

The department’s original fire equipment consisted of “two steamers with hose carts and an ample supply of hose; also a hook and ladder truck, all of which are drawn by horses owned by the city.” The new department’s first call – to a stable fire near Ninth and Washington streets – took place on May 27, 1869.

The city’s firefighting innovations were part of an 1870-in-review editorial in the Jan 2, 1871, Illinois State Journal.

“The efficiency of the (fire) department … has shown that a paid steam fire department is, after all, the best for all concerned,” the paper said. Meanwhile, the story said, “several large conflagrations have been prevented” by a supply of water.

There is no exaggeration in the statement, that by the introduction of water, an amount of property has been saved in this city sufficient to pay for the entire cost of the Water Works, that, but for the abundant supply of water, would have been destroyed.

*The formal title seems to have been “fire marshal” until at least the early 1900s, but “fire chief” gradually became the more common usage.