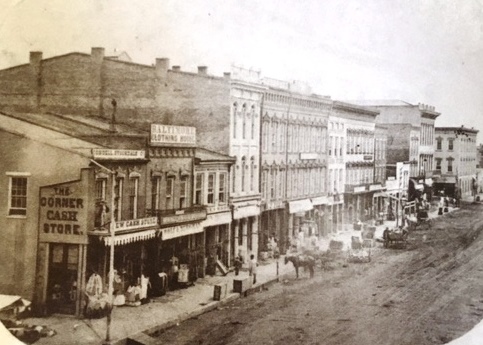 The north side of the downtown square, 1859. No hogs are visible, but dirt still is the predominant feature of Washington Street. (Sangamon Valley Collection)

It took years for the city of Springfield to finally ban hogs from roaming downtown streets. To historian Paul M. Angle, however, the fact that the debate even took place  demonstrated that Springfield, at long last, was developing a civic spirit.

Hogs ranged at will through the streets, wallowed in the mud holes, disputed the narrow sidewalks with pedestrians, and rooted up the board at frequent intervals. … (H)owever, the hogs had sturdy defenders. As scavengers they helped to keep the city clean; and to allow them to run loose was to enable the poor to raise their own meat. Counter arguments were that the hogs created more nuisances than they removed; that they were often found dead within the city limits; and that a dead hog was never known to have an owner.

The hogs compounded the problems created by the city’s unpaved streets, which turned to deep, sticky mud during rainy weather.

“Hogs and mud were evidences that absence of civic pride was widespread,” Angle wrote. “… The plain truth is that from certain points of view Springfield was a very unlovely city.”

Angle quoted a story he attributed to Abraham Lincoln. According to the story, a preacher asked the Illinois secretary of state for permission to deliver some lectures in the Statehouse (today’s Old State Capitol). The subject, the preacher said, was to be “the second coming of our Lord.”

“It’s no use,” the secretary of state replied. “It is my private opinion that if the Lord has been in Springfield once, he will not come the second time.”

In 1853, however, the four city aldermen took on both the mud and the pigs. They voted to begin paving streets around the downtown square with wooden planks. The job took a year to complete, Angle wrote. “Once started, however, the movement continued … by the end of the decade most of the downtown streets were finally out of the mud, if not free from it.”

Local newspapers suggest the paving projects created little controversy. The same wasn’t true, however, of the aldermen’s other beautification effort: aldermen voted on March 8, 1853, “That no horse, sheep, goat, swine or goose, or any such animals, shall be permitted to run at large in this city, at any time.” Owners of loose animals were to be fined $1 to $3.

Owners of most animals listed apparently didn’t object, but people who raised hogs almost immediately began lobbying to allow their pigs to run free. Petitions were circulated by both sides (“Hog and Anti-Hogites,” as the Illinois State Journal called the two factions), and on May 3, the council voted to repeal the ordinance as it pertained to swine.  But aldermen then, at the same meeting, voted 3-1 to ban hogs from the streets only during the period between Feb. 15 and May 10 annually.

That wasn’t satisfactory either, so aldermen finally held a special meeting May 31 to “dispose of” the hog question. At that meeting, they voted 4-0 to allow hogs to run free from June 1 to Oct. 1 each year – but only as long as each hog had a ring in its nose (a ring made it painful for the hog to root in the dirt, preventing it from doing the worst damage to streets, sidewalks, fences and gardens).

That compromise failed to dispose of the controversy, and the hog question ended up on the city ballot at the next election, April 4, 1854. The result was overwhelmingly – 423-245 – to keep hogs off the streets.

“It will be seen that the ‘hog license’ is at an end,” the Journal triumphantly reported. (In rare agreement, both the Journal and the Illinois State Register had opposed free-range hogs). “This result will be eminently gratifying to ‘our host’ of the American, and most of his neighbors. The word is, shut up the hogs!”

But the vote was no panacea, as the Register complained in April 1855:

What is the use, we should like to know, in having city ordinances if they are not to be enforced? Not long since an ordinance was passed requiring hogs running at large to be rung, yet there are hundreds of these filthy and flea-covered animals in the streets without the sign of a wire in their noses. Again, where are the muzzles that were to secure our citizens from mad dogs? You cannot go half a dozen rods on any street without meeting some vile unmuzzled cur ready with a growl to dispute your right to the side-walk. Speaking of side-walk reminds us that ordinances requiring them to be built are not always put in force. There are some awful delays in complying with the requirements of the common council. We are great as a city in passing ordinances, but too often they end in mere smoke.

Crudities in plenty remained, but substantial buildings faced a tree-planted square, fine homes sheltered many of the inhabitants, the mud at least was not quite so bad as it had been, and a civic spirit had come into existence and been made manifest in many ways. In comparison with older places, the prairie capital on which the eyes of the nation were soon to focus might still be a country town; but in comparison with itself of other days, it had become a shining city.

This entry was posted in Early residents, Local government. Bookmark the permalink.