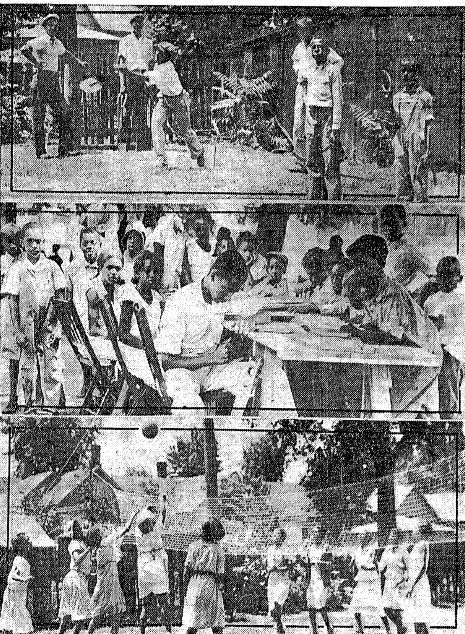 Activities — horseshoes, woodworking and volleyball — at the Douglass Center in June 1932 (Courtesy State Journal-Register; odd crop marks are in original)

The Douglass Community Center offered civic, social and educational opportunities to African-American residents of Springfield when most similar organizations were closed to blacks.

The Douglass center (apparently named after abolitionist Frederick Douglass) opened in 1926. It was phased out as part of Mayor Nelson O. Howarth’s drive to desegregate Springfield in the 1950s. Although also supported by several private charities, the center was administered and largely funded by the city Playground and Recreation Commission.

Impetus for creation of the center began about 1918, when activist Z.W. Mitchell opened a “Colored Social Center” at 1127 W. Monroe St. That facility lasted only a couple years, but it apparently prompted the Council of Social Agencies, an umbrella group for local charities, to begin working with the city on a more permanent arrangement.

The public/private coalition bought and remodeled a house at 1610 E. Jackson St. “to become a recreation and social centre (sic) for the colored citizens of Springfield,” according to the Sept. 26, 1926, Illinois State Journal.

The center will be used by the Y.W.C.A., Boy Scouts, Girl Scouts and all activities promoted by the Douglass Community service (league), including dramatic clubs, glee clubs, social groups and civic units. Through the courtesy of Lincoln library a branch library also will be maintained there. 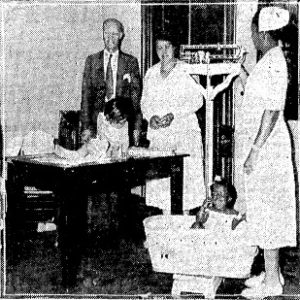 The Jackson Street building became overcrowded almost as soon as it opened, and the Douglass Center moved in 1928 to 1530 E. Capitol Ave. The center shared quarters there with the Springfield Urban League, which also took on a larger role with programs at the Douglass Center.

As expansion continued, the Urban League in 1932 bought a three-story, 17-room building at 234 S. 15th St., and both organizations moved there. The building, known as “the Old Gray Lady,” reportedly was once the home of John Priest, who was mayor of Springfield in 1870.

On 15th Street, the center provided meeting space for groups like the NAACP, the YWCA’s Phyllis Wheatley Club, Boy and Girl Scouts and others.

The recreation commission organized drama groups, arts and crafts classes, track meets and excursions. The building had room for a playground, and the center’s baseball and basketball teams took on all comers.  The Urban League offered health guidance, clinics and educational programs. O. Jerome Singleton (1903-85), center director in the 1930s, emphasized music programs; choral groups based at the center performed throughout Springfield, including when President Herbert Hoover rededicated Lincoln’s Tomb on June 17, 1931. 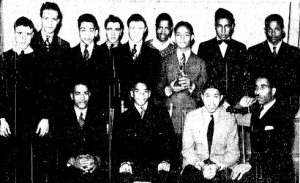 The Journal published a weekly list of activities at the Douglass Center. One sample from May 1933 announced: a boy’s ping-pong tournament; the seasonal opening of the center’s playground; classes in basket-weaving; a meeting of the Springfield Forum discussion group, with a speaker talking about the Council of Social Agencies; ukulele classes for children (another Singleton initiative); and the weekly get-together of the Ladies Physical Culture group, the agenda for which included “gymnastic exercises” and a program on nutrition.

Nelson Howarth, elected to his first term as mayor on April 5, 1955, began quickly to rid city government of holdovers from the days of routine racial segregation. One of the recreation commission’s first actions under Howarth was to close the Douglass Center as a year-round facility. Although the playground remained open during the summer, classes and other school-year activities were transferred to nearby Withrow Elementary School.

“The playground and recreation commission feels that in its desire to remove segregated areas such action will encourage a friendlier community spirit as well as advance recreational opportunity,” a statement from the commission said. 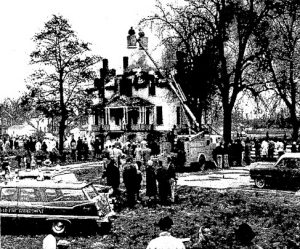 About 300 spectators hoped to see “the Old Gray Lady” destroyed by a giant blaze. They were disappointed. (Courtesy State Journal-Register)

The Urban League kept its base of operations at 234 S. 15th St. until 1961, when the league turned the building over to the city of Springfield. The city in turn transferred the property to the Boys Club (now the Boys & Girls Clubs of Central Illinois).

The Springfield Fire Department set “the Old Gray Lady” afire on March 29, 1961, in what was intended to be a filmed demonstration of the city’s prized new “snorkel” ladder truck. However, the brick structure resisted burning, and confusion between firefighters and filmmakers meant it took hours for the former center to burn down.