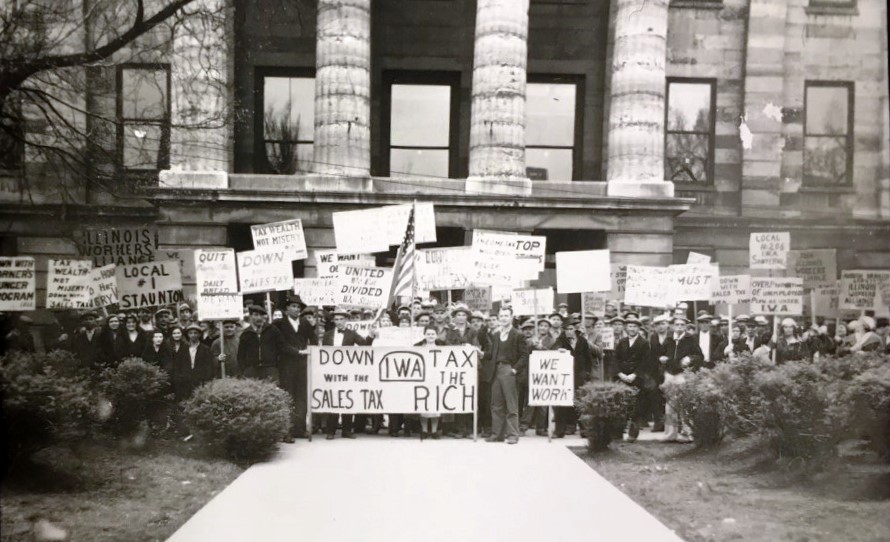 Police cordoned off Sangamon County in April 1933 to quell a planned “hunger march” on the Statehouse by unemployed people from around Illinois.

Springfield Mayor John “Buddy” Kapp summed up authorities’ opinion of the demonstration: “The law enforcing officers of the state feel that … no good can come of demonstrations of this kind and that they are purely for the sake of embarrassing governmental agencies and are supervised only by extreme radicals.”

Authorities feared a repeat of a protest in January, when a related group of demonstrators had mobbed the office of Gov. Henry Horner. The hunger march was organized by the Illinois Unemployment Council, some of whose leaders also were involved in the January protest.

The march’s organizers said they expected as many as 15,000 people to converge on the Statehouse April 7. With Illinois and the nation immersed in the worst days of the Great Depression, the marchers planned to call on state government to provide $100 million worth of poor relief.

However, they were thwarted by law enforcement’s ad-hoc – and almost surely unconstitutional –  response. In the end, 20 marchers were allowed to meet with Gov. Henry Horner, but the rest were turned away by police barriers, arrests and, in one case near Ottawa, a tear gas attack. 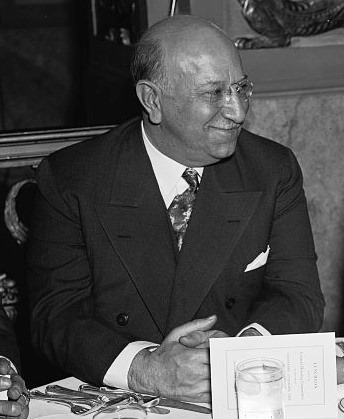 Two airplanes dropped bundles of letters at the barriers. The letters, signed by Sheriff William Beynon, ordered the marchers to turn around and choose their representatives to meet with Horner.

Several march organizers, including at least two from Springfield, were arrested, most on specious or even nonexistent charges.

The Illinois State Journal reported on the crackdown the morning of April 7, the day the march was supposed to have taken place.

Deputy sheriffs and state police are on duty at each of the stations prepare to repel any attempt of the marchers to break through. …

Railroad special agents are co-operating with city and county authorities to keep the marchers from entering the city on freight trains. All available city police will be on duty today and will not allow any crowd to congregate.

A meeting of miners, who police say were planning to take part in the march on the state legislature and Governor Horner, was broken up yesterday afternoon at Reservoir park by police under the direction of Assistant Chief Frank J. Healy. George Voyzey, R.R. 8, one of the leaders at the meeting, was arrested by orders of Chief of Police Carl F. Nuess. No charge was placed against him. He later was released and was ordered to report to Chief Nuess today.

Greening … ordered Roy Jones, reputed local leader of communists to jail on a charge of advocating overthrow of representative government by violent or unlawful means. The charge comes under the treason statutes of the Illinois criminal code. …

Greening said that Jones, in the presence of witnesses, proclaimed himself a “Marxian communist” and that he was in favor of a revolution “peaceful if possible and if not then by violence.”

Thomas McKenna of the Chicago branch of the American Civil Liberties Union told Horner in a meeting April 6 that squelching the march was an obvious violation of people’s right to protest.

“I have never seen such wholesale official lawlessness in the state of Illinois or anywhere in the country as I have witnessed within the last twenty-four hours,” McKenna said.

Nonetheless, the marchers were not allowed to proceed. Instead, Horner had a two-hour conversation with the 20 protest representatives the afternoon of April 7. The discussion was “orderly,” the Journal said.

The governor was told that relief in Illinois is inadequate, and his answer was that the (then-new) state sales tax was passed by the general assembly as a means of securing sufficient funds with which to care for the unemployed. The governor warned against demonstrations and marches by large numbers throughout the state. He said that he was doing all in his power to relieve present conditions. …

In addition to immediate relief, the marchders presented to the governor a program including a (foreclosure) moratorium for the small home owner and the poor farmer and withdrawal of troops from the coal fields.

The results of the conversation were anticlimactic, partly because the Horner meeting coincided with the return of legal alcohol sales following Prohibition. (The Journal’s banner headline on April 8, 1933, read, “City greets legal beer in gay mood.”)

Although state government took a variety of steps to help people as the Depression continued, it wasn’t until 1937 that the legislature created an unemployment compensation system. Illinois was the last state in the nation to do so.

Horner also had offered to meet with a delegation of unemployed workers who rallied at the Statehouse Jan. 25, but the demonstrators refused. The Journal’s description of the scene:

Storming the governor’s quarters and demanding a hearing, 150 unemployed men and women ran rampant in the executive offices yesterday afternoon. The door jamb of the outer office was swept from its fastenings and a long, highly polished table in the reception room was marred by the feet of rioters…

The confrontation continued as police forced the demonstrators off the Capitol grounds, the newspaper said. “Several were beaten when they resisted the ejection,” according to the story.

George T. Voyzey (1893-1950), who was arrested and released at Reservoir Park April 6, also took part in the January demonstration. It’s unknown whether he was in the group that invaded Horner’s office, but the Journal reported that Voyzey was ejected from the Illinois House chamber when he tried to make a speech from the gallery.

Despite apparently well-founded allegations that he had Communist sympathies, Voyzey remained a labor organizer the rest of his life. When he died in Denver, Colo., he was the Colorado representative of the American Federation of Labor. He is buried at Oak Ridge Cemetery.

Roy Jones (1902-71) was a coal miner for a time. He apparently worked later as a truck driver and stockman for the city of Springfield, but he disappears from city directories after about 1940.

Jones was arrested again in 1934 on nebulous charges that he was a Communist, but was released. Newspaper records give no indication that he ever went to court as a result of the arrests.

His later activities are unclear, partly because Jones changed residences almost annually and partly because several other people named Roy Jones lived in Springfield in the 1930s and ‘40s. Jones apparently moved to California at some point to live with his daughter. He died in Redwood City, Calif.

‘Save the Union’ riot

Both George Voyzey and Roy Jones were prominent in the local “Save the Union” movement, a left-wing attempt in the 1920s to oust John L. Lewis as president of the United Mine Workers of America. The group called for a national miners’ strike and a five-day, six-hour-a-day work week.

In Springfield, the dispute came to a head on April 24, 1928, at the Old West/Panther Creek No. 4 mine, which was a few blocks west of Douglas Park. The “Save the Union” faction set up a picket line at the mine, but miners allied with the regular UMWA continued to work.

“Discontent had been brewing among miners all during the seven days that pickets were on duty at the mine,” the Journal reported. “They had asked them to withdraw and had become incensed at being called “scabs” and traitors to the cause of the union, they said. Each morning feeling between the two factions became more intense.”

Sheriff’s deputies were assigned to the mine to keep the two sides apart. On April 23, however, Jones got in a fistfight with Joe Loda, a regular UMWA district board member. That night, according to the Journal:

(M)embers of Old West local No. 492 held a mass meeting and planned the attack. Reporting at the mine for work in the usual manner, they formed their lines back of the mine and, arming themselves with clubs, awaited the signal for the charge. …

(T)he miners’ attack on the pickets came unheralded, and as a result, only ten deputy sheriffs were on duty at the mine. In spite of their efforts, the charging miners rushed past them, dispersed the picketers and pursued several of their number for more than a quarter of a mile from the mine. Returning, the miners surrounded Voyzey and his wife, who clung to him. Quickly forming a circle around the couple, the deputies held back the men after they had knocked down Voyzey.

A month later, Voyzey was elected state president of the “Save the Union” faction, while Jones was named secretary of the group’s local sub-district. In June, however, the regular UMWA state president, Harry Fishwick, announced that Voyzey and Jones, along with several of their allies, had been expelled from the union.

The “Save the Union” movement petered out fairly quickly, although many rank-and-file miners continued to resent what they saw as Lewis’ high-handed regime. That contributed a few years later to the ultraviolent “miners’ war” between the UMWA and the new Progressive Miners of America.