In January 1918, the federal government told thousands of Sangamon County workers to take the week off. 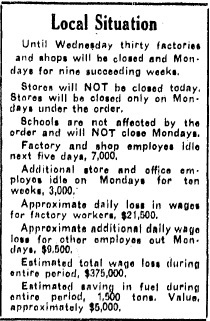 U.S. fuel administrator Harry Garfield on Jan. 17, 1918, ordered most factories east of the Mississippi River to close from Friday, Jan. 18, through Tuesday, Jan. 23. The idea was to save coal, which was urgently needed for ships hauling supplies to World War I fronts in Europe, and to reduce congestion on overburdened railroads.

In addition to the five-day industry closure, Garfield directed nearly every other business in the eastern U.S. to close up shop on each of the next 10 Mondays. The Illinois State Register spelled out the impact on Springfield’s job market.

Today 7,000 Springfield factory and shop employees will have the first of thirteen additional workless days as enacted by the order of Fuel Administrator H.A. Garfield closing all industries not engaged in the production of food supplies for five successive days and each Monday of the coming ten weeks. …  Dr. Garfield’s order went into effect at midnight last night and as a result the wheels will be idle in every important industry of the city until next Wednesday.

Under the provisions of the order stores, theatres, office buildings and other business establishments which are affected will not be closed until Monday, when they will feel the first force of the order which forbids their using heat on these days. Grocery stores are allowed to remain open until noon Monday in order to offset any ill effects which might result from a two-day shut down of food supply sources.

The only local industries not affected were the Western Cartridge Co., which produced smokeless gunpowder, and the National Zinc plant. The biggest of the 30 manufacturers that had to shut down for the full five days were the Illinois Watch Co. and Meter Works (2,200 employees), Racine-Sattley (500) and the International Shoe Co. (450).

Local businesspeople argued that the amount of coal saved in central Illinois would pale next to the disruption caused by Garfield’s order, but Sangamon County fuel administrator H.A. Converse said he couldn’t grant any exceptions to the directive.

Federal officials did make some adjustments almost immediately, however. Notably, theaters, billiard parlors and similar businesses were allowed to stay open on Mondays to provide entertainment for idled workers. But they then had to close on Tuesdays.

In the end, the weekly holidays lasted only a month in Sangamon County. The last shutdown took place on Monday, Feb. 11, which was unusually warm anyway. According to the Feb. 12 Register:

Theaters and motion picture houses had their usual Monday holiday crowds at both afternoon and night performances. The spring-like weather resulted in the appearance on the streets during the day and evening of a larger proportion of the “Idle 10,000” than formerly and gave the business section more of a holiday aspect than usual.

Garfield’s order was suspended in Sangamon County on Feb. 17. No local businesses violated the order during the month, Converse reported.

This entry was posted in Business, Industry. Bookmark the permalink.