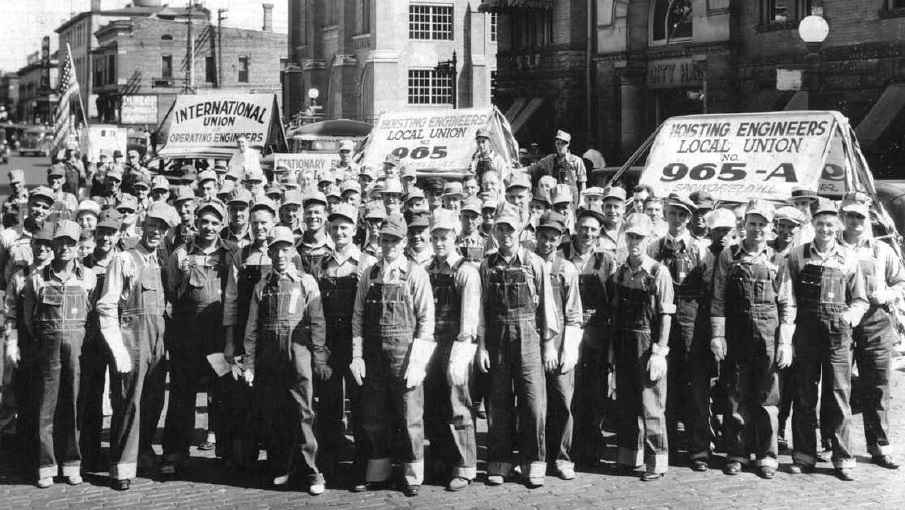 Members of Local 965 of the International Union of Operating Engineers, ready for Springfield’s Labor Day parade in 1936. (Copyright Local 965; used with permission)

Springfield-based Local 965 of the International Union of Operating Engineers, founded in 1931, struggled at its start, largely because of the Great Depression. But there was another problem, according to an international union official who critiqued the local in 1933: the local’s leadership was “a bunch of hicks.”

The local officers took the criticism to heart, according to one of Local 965’s founding members, Ross Loughmiller (1902-88). Loughmiller’s reaction was quoted in IUOE’s 75th anniversary history, written by Janice Petterchak and published in 2006.

“I will never forget that meeting,” he recalled in 1936, “and neither will I forget Brother Haury (Charles Haury, the international representative) I have never seen him from that day to this, but I hope I will have the honor of thanking him, sometime, for the bawling out we got that night; for, from that day until this, our Local Union has been progressing as no other engineers’ organization, to my knowledge, has, and I sincerely hope that it continues to do so.”

This entry was posted in Labor unions. Bookmark the permalink.