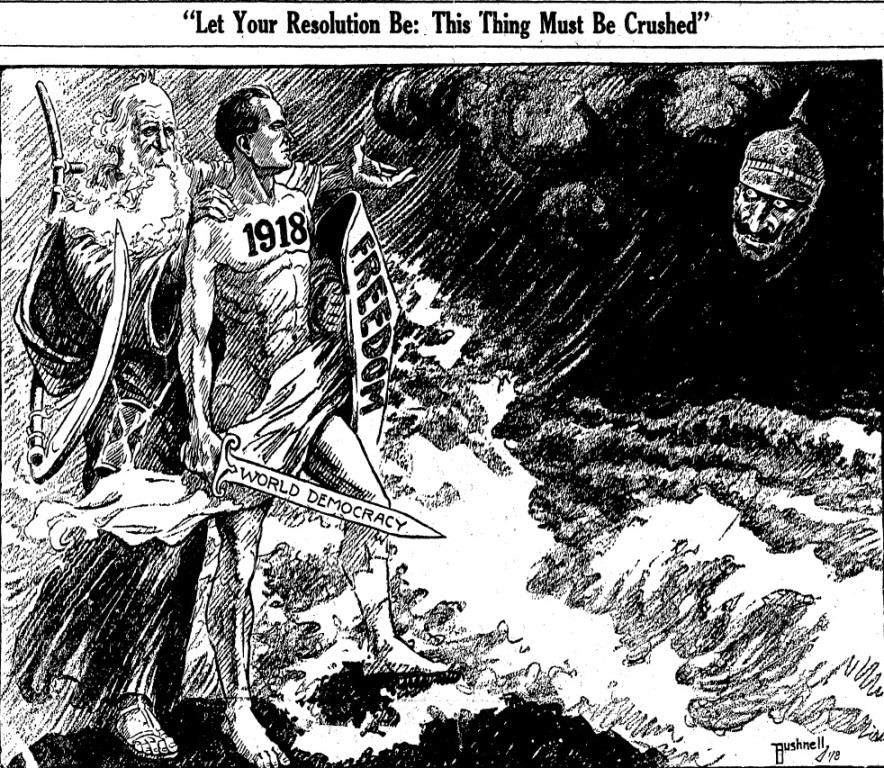 World War I was the big story in Springfield newspapers on Jan. 1, 1918. This five-column drawing dominated the front page of the Illinois State Register. (Courtesy State Journal-Register)

A lack of liquor meant a quiet New Year’s Eve a century ago in Springfield.

City residents had voted in April 1917 to ban saloons and alcohol, and the Illinois State Register reported on the consequences for New Year’s revelry on Jan. 1, 1918.

Springfield greeted the New Year last night in a way that must have been a surprise to old man 1917, if he remembered the reception given him when he visited the capital city 365 days ago, looked it over and decided to stay a while. Perhaps the old man thought it an improvement; possibly he swelled with pride to note that 1918 received a tame reception compared to that given his predecessor.

Missing last night were the jovial, bibulous, convivial, roistering, swaggering – even staggering – crowds of self-appointed reception committeemen. If the glasses tinkled and the corks popped, they tinkled and popped with the muffler on. If the bright lights twinkled, they twinkled on the sly and with a weather eye out for the extinguisher. If the waiter or bartender opened up another, the waiter or bartender had been given the proper password and presented the necessary credentials.

The cabarets, so largely patronized just one year ago, were as dead as 1917 was a second after the clock marked 12 p.m. If Springfield did not enter into a “dry” year and with the amber-colored and other colored fluids entirely missing, it was less wet than previous years and less fluid flowed.

At the hotels where New Year’s eve had in former years been an event of note, the only celebrations were those of private parties who danced the old year away. At the churches the event was observed with watch parties and midnight services. But on the whole Springfield watched the old year die calmly and without particular concern, greeting the new year with a casual, “Hello. Hope you’re an improvement on the old year.”

To be fair, area residents had other issues on their minds, especially World War I. News from Europe dominated the front pages. With U.S. troops moving onto the battlefields, the Allies had begun to record successes, but “the Hun” was still seen as a fearsome opponent. Bothlocal newspapers listed locations where area men could register for the draft.

Meanwhile, the federal income tax was being greatly expanded to help finance the war – 500,000 people paid the tax in 1917, while 7 million returns were expected in 1918 – and central Illinois officials were preparing to hand out income tax forms. (A family with an annual income of $3,000 was to pay $20 in income taxes under the new law.)

Even the kickoff event of the state’s 100th year, the Illinois Centennial Poultry Exhibit and Corn Show at the state Arsenal, had a war connection: one of the attractions was the Red Cross booth. According to the Illinois State Journal:

The Red Cross exhibit has something to make the grandmothers open their eyes as well as the younger folk. It is a sock knitting machine, with which a good operator can make a pair of heavy wool socks for a soldier in one hour. At the exhibit also are to be seen woolen sweaters, helmets, wristlets, mufflers, socks, gun swabs, mittens, the old-fashioned kind, and those with a stall for the trigger finger, something new.

Some New Year’s Eve traditionalists, however, had their plans foiled. Springfield police and Sangamon County deputies raided five homes and two “soft drink” parlors on Dec. 31, confiscating more than 45 cases of beer and “several gallons of booze,” the Journal reported.

“We are just beginning our battle with the ‘blind pigs’ of the city,” Police Chief Wilbur Morris told the paper. “The raiding will continue till the illegal sale of liquor is ended.”