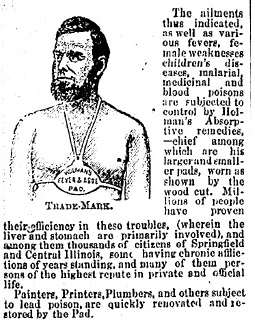 Part of an ad for Holman’s Fever and Ague Pad, 1879 (Courtesy State Journal-Register)

The Sangamo Country of the early 1800s was an agricultural paradise in many ways, but it had one major drawback: the anopheles mosquito, which carried the malaria parasite.

Virtually every early resident of central Illinois was exposed to malaria – commonly known as “the ague” (pronounced “agg-ew” or “agg-rew”). Although victims rarely died, they were subject to intermittent severe fever, shakes and general listlessness caused by anemia for the rest of their lives. And malaria symptoms usually struck in the fall, leaving sufferers with little energy at harvest time, when they most needed it.

(B)y 1800, after the influx of large numbers of settlers, traders, and troops into Illinois, several malarial epidemics had decimated whole communities, and “fever and ague” became a danger endemic to the country. …

Pioneer cabins, because of their darkness, humidity, and warmth as well as their gaping windows and doors, made ideal environments for mosquitoes, and settlers had no choice but to share their space with the stinging insects. One Illinois visitor of the (1830s) observed a mother and her half-dozen children through the open window of one of these cabins, their hands and arms flailing the air as they went about their tasks. At first he thought he was witnessing the ceremony of an eccentric western religious sect, “but on entering I saw they were all busy in warring with the mosquitoes.” …

Many authorities predicted that because of its environment the American heartland might never be healthy.

The 1881 History of Sangamon County, Illinois, published by the Inter-State Publishing Co. of Chicago, vividly describes the malaria’s effects on its victims.

No author is listed for the 1881 history, which was part of a series of Midwestern county histories published by Inter-State and some related companies. The malaria section is repeated almost verbatim in many books in the series. It’s by no means certain that the writer of the malaria excerpt even lived in Sangamon County, although the Sangamon County volume apparently was one of the earliest, if not the first, in the series. The excerpt, however, does demonstrate that the writer was talented – and, probably, a malaria sufferer him- or herself.

Here is a portion of the book’s section on malaria.

Another feature of pioneer life which every old settler will vividly recall was the “chills and fever,” “fever and ague,” or “shakes,” as it was variously called. It was a terror to new-comers, for in the fall of the year almost everybody was afflicted with it.

It was no respector of persons; everybody looked pale and sallow as though frost-bitten. It was not contagious, but derived from impure water and air, which was always developed in the opening up of a new country of rank soil like that of Sangamon county. The impurities continued to absorb from day to day, and from week to week, until the whole corporate body becomes saturated with it as with electricity, and then the shock came; and the shock as a regular shake, with a fixed beginning and ending, coming on in some cases each day, but generally on alternate days, with a regularity that was surprising. After the shakes came the fever, and this “last estate was worse than first;” it was a burning hot fever and lasted for hours. When you had the chill you couldn’t get warm, and when you had the fever you couldn’t get cool. It was exceedingly awkward in this respect – indeed it was.

Nor would it stop for any contingency – not even a wedding in the family would stop it. It was imperative and tyrannical. When the appointed time came around, everything else had to be stopped to attend to its demands. It didn’t even have any Sundays or holidays.

After the fever went down you still didn’t feel much better, you felt as though you had gone through some sort of a collision, threshing machine, or jarring machine, and came out not killed, but next thing to it. You felt weak, as though you had run too far after something, and then didn’t catch it. You felt languid, stupid and sore, and was down in the mouth and heel and partially raveled out. Your back was out of fix, your head ached and your appetite crazy. Your eyes had too much white in them; your ears, especially after taking quinine, had too much roar in them, and your whole body and soul were entirely woe-begone, disconsolate, sad, poor and good for nothing.

You didn’t think much of yourself and didn’t believe that other people did either; and you didn’t care. You didn’t quite make up your mind to commit suicide, but sometimes wished some accident would happen to knock either the malady or yourself out of existence. You imagined even the dogs looked at you with a sort of self-complacency. You thought the sun had a sort of sickly shine about it.

About this time you came to the conclusion that you would not take the whole State as a gift; and if you had the strength and means you would pick up Hannah and the baby, and your traps, and go back “yander” to “Old Virginny,” the “Jarseys,” Maryland, or “Pennsylvany.”

Wetland drainage reduced the mosquito population, and thereby the prevalence of malaria, by the 1870s, according to Richard Jensen’s Illinois: A History (1978), “although old-timers still suffered greatly from the recurrence of ‘Illinois shakes.’”

Sangamon County pioneers knew nothing about the mosquitoes’ role in malaria – that wasn’t discovered until the late 1800s – so people like the writer of the History of Sangamon County, Illinois excerpt above blamed the malady on “miasmatic” air and water.

Advertisements promising cures for ague and related maladies were a constant feature of the county’s first newspapers. Quinine was known to provide some symptomatic relief, but the vast majority of “remedies” ranged from the unlikely – ads for Ayer’s Ague Cure proudly declared it contained “no quinine or other mineral” – to the ludicrous, like Holman’s Fever and Ague Pad, apparently a mustard-plaster-like device that was held across the chest by a cloth harness.

The reduction in malaria cases caused by drainage and mosquito abatement can be roughly traced by the corresponding drop in newspaper ads for quack remedies. Springfield newspapers published at least 650 advertisements for anti-ague “solutions” in 1880; only about a half-dozen ads (mostly for Electric Bitters, “the matchless tonic medicine”) promised ague relief in 1910.

This entry was posted in Early residents, Medicine. Bookmark the permalink.