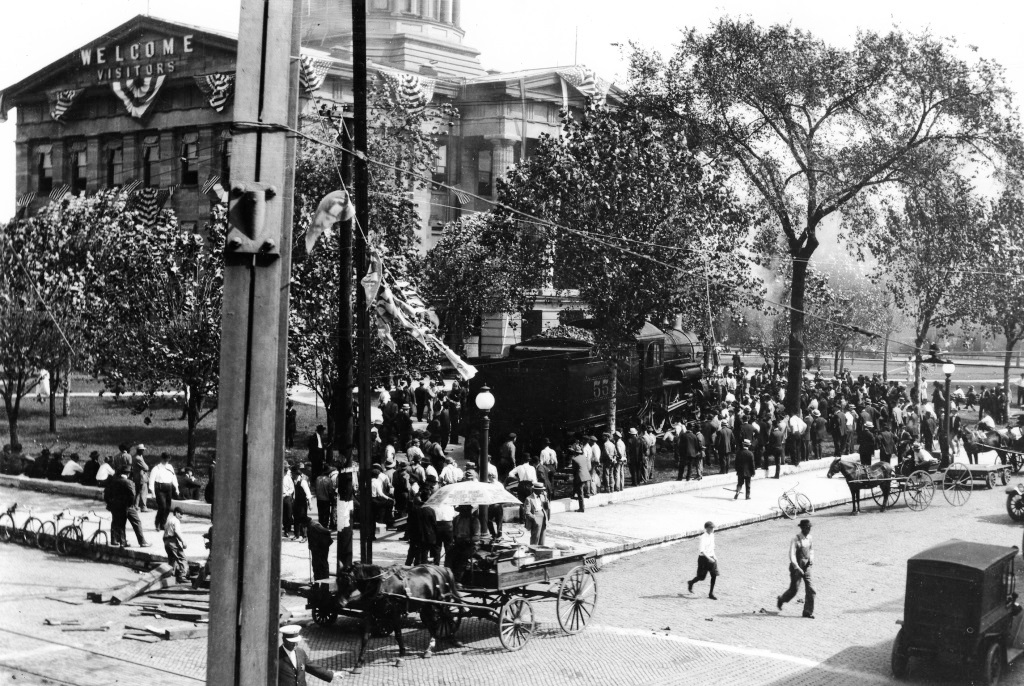 Spectators crowd around Engine No. 533 on the courthouse lawn. Part of one of the downtown arches can be seen on the left (Sangamon Valley Collection)

Two thousand people filled Adams Street in 1915 to watch a steam locomotive puff its way from Third Street to the courthouse square.

The engine – the Chicago & Alton Railroad’s No. 533 – was set up on the south lawn of the Sangamon County Courthouse (today’s Old State Capitol) and served as the centerpiece of downtown Springfield’s last Illinois State Fair carnival.

Temporary tracks were laid on Adams Street between the Third Street railroad line and the courthouse, and a giant derrick lifted the engine off its regular tracks onto the temporary rails.

The transfer took place Sept. 15, 1915. The Illinois State Journal described the move the next day.

That the crowd was witnessing a very unusual feat was emphasized by the fact that railroad officials galore from both St. Louis and Chicago made special trips to this city to be present when the big engine cautiously wended its way down one of the main streets of the capital.

… ((T) operation was a very delicate matter. Under the guidance of the most skillful men in the employ of the road, the engine and tender separately were moved inch by inch from the main tracks of the road to the temporary tracks in Adams street.

In its story, the Illinois State Register explained the purpose of the relocated engine.

The engine is to be used in supplying steam for the vapor illuminating system to be used during the carnival. Perforated piping has been placed about the cornices of the court house and the pipes will then be filled with steam from the locomotive. Vari-colored lights on adjacent buildings will throw their colors on the rising vapor, making an indescribably sight of beauty. The new scheme of illumination is one of the most unique ever attempted in the city.

The light show was only part of the carnival lineup. Acts included the Kell Trio, with a “novel comedy sketch act;” the Frisco Quartet, “a group of colored singers who are recognized as among the best carnival entertainers on the road,” and the Boston Bulls, a dog act.

The headliners, however, were Dare Devil Hurley and Mademoiselle LaBella. The mademoiselle, the Register said, was to “speed down a steep incline on a bicycle and the wheel she rides will give a flip and she will proceed up another incline while Hurley on a trapeze will reach down and swing her from the bicycle to the trapeze.”

“Those who are in charge of the program promise that this stunt will prove to be one of the best features ever seen during carnival week of the fair.”

The state fair itself offered little or no non-farm entertainment, especially in the evenings, in the late 19th and early 20th centuries. The city and its businesses took advantage of the void, drawing fairgoers downtown with evening carnivals featuring rides, parades and vaudeville acts. The arches that sat on all four corners of the square from 1899 to 1921 were erected as part of downtown’s fair week attractions.

In 1907, however, Happy Hollow was built in a valley just inside the fairgrounds’ Main Gate. Over the next few years, the fair gradually expanded its own entertainment offerings, with rides, circuses and fireworks.

Finally, at the urging of the state agriculture board, the Springfield Commercial Association agreed in 1916 not to sponsor a downtown carnival “in order that all efforts might be concentrated on a night show at the state fair grounds.”

Hat tip: Thanks to Curtis Mann of the Sangamon Valley Collection at Lincoln Library for drawing this to our attention.

This entry was posted in Amusements, Historic Sites, Spectacles. Bookmark the permalink.