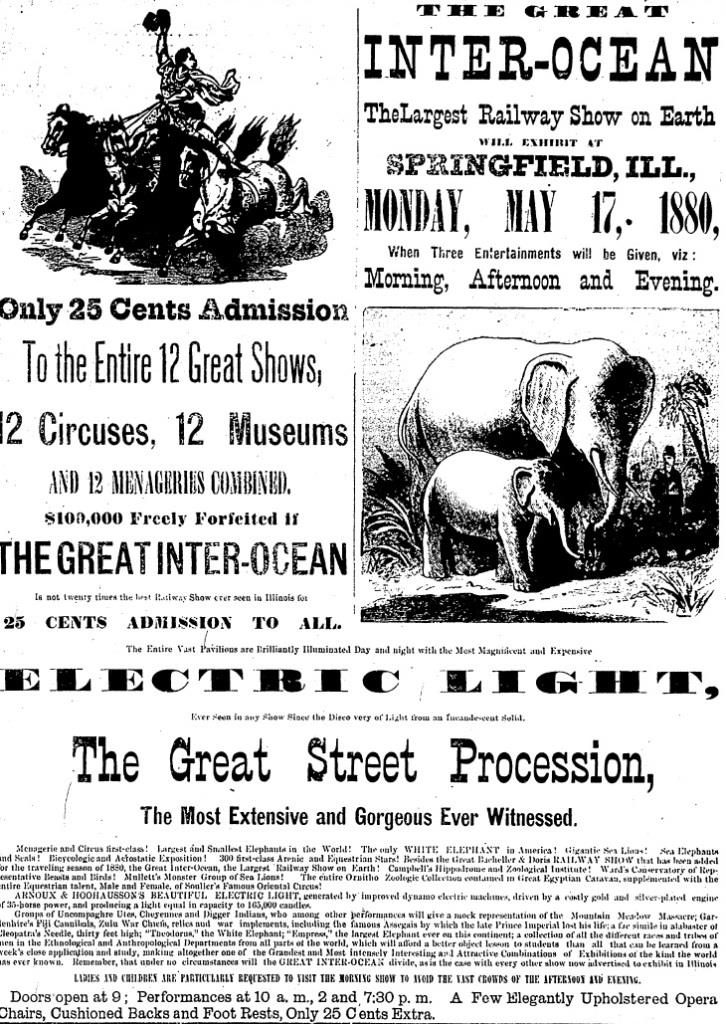 Many Springfieldians got their first exposure to electric lights from two traveling circuses in 1880.

Within a year, however, the city’s first power station was powering 10 “very brilliant” lights downtown, and a group of prominent businessmen had created the Springfield Steam Supply and Electric Light Co.

Both the Sells Brothers and Great Inter-Ocean circuses, which played Springfield within weeks of each other in April and May 1880, advertised electric lights as major attractions in addition to acrobats, exotic animals and daredevils.

The Entire Vast Pavilions are Brilliantly Illuminated Day and night with the Most Magnificent and Expensive ELECTRIC LIGHT, Ever Seen in any Show since the Discovery of Light from an Incandescent Solid. …

Illinois State Journal columnist John R. Vaughn wrote in 1922 about seeing his first electric lights at one of the circuses.

The dynamo was run with an upright traction engine, and the light produced was nothing short of wonderful.

But you were disappointed when you found that the electric light wasn’t in operation in the crown lights with which the circus rings were illuminated. You saw there the half-circle torches swinging from the poles, and you knew the show was still burning the old-time lard oil.

You couldn’t understand it, but the gentlemanly usher who passed your way with concert tickets explained. “Electric light is too bright. It blinds the performers. We tried it, but had to take it out after a dozen of our high-priced artists had been killed.” He was a gentlemanly usher, and you didn’t doubt he was a perfectly truthful one.

Another Journal writer, A.L. Bowen, had a similar circus experience. Although the “flickering, jumping arc light (was) cumbersome and in its form unsatisfactory,” he wrote, it “drew thousands of persons to the circus grounds.” 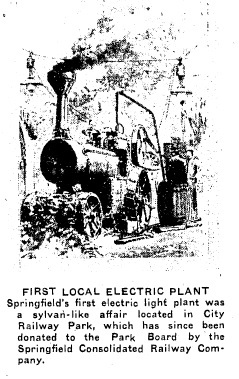 For a few weeks in July 1881, Springfield inventor Albert Ide set up a small steam generator in the northside Oak Ridge Park (now part of Lincoln Park). It wasn’t much – a 1918 advertisement for the Springfield Gas and Electric Co. described the equipment as “an ordinary traction engine, two arc lights, a few poles and a couple of hundred feet of copper wire.”

“But this primitive electric light display was the sensation of Central Illinois and thousands came to Springfield to witness the then startling demonstration,” according to the ad.*

More impressively the same month, an engine at Ide’s foundry near Fourth and Washington streets began powering 10 2,000-candlepower lights around downtown. (Each of the lights was the very rough equivalent of a 1,500-watt incandescent bulb today.) Three of the lights were outside, and the other seven illuminated the interiors of business establishments.

Thousands of people came downtown the evening of July 21, 1881, to see the lights switched on for the first time. The Illinois State Register proclaimed the experiment a success.

The lights were … so brilliant that daylight was almost discounted, and the gas lights sunk to the insignificance of tallow dips in comparison with them. …

It is safe to conclude that the light will not be a favorite with all classes of people. Those who “choose darkness rather than light, because their deeds are evil,” will never take stock in it.

Ide’s system, produced by a rival of Thomas Edison, was usable only for street and business lighting, the newspaper reported, not for home power.

(T)he current passes from the machine at the foundry into a steam pipe, under ground, and is taken from a gas pipe at the Leland hotel. It then passes back over the wires erected for the purpose. Fears were expressd that … it might interfere with the workings of the telephone wires, but this it did not do.

The downtown project was successful enough that Ide and the other investors (among them R.D. Lawrence and George Black) in the Steam Supply and Electric Light Co. set up a generating station in 1882 in the former Central Baptist Church at Seventh and Adams streets. The two 275-horsepower engines in the new facility were expected to support  200 lights. By the end of the year, the company had 63 lights in operation, with 14 more contracted for at the Statehouse

The old church’s steeple held four large mechanical clocks, one facing in each direction, which had earned it the nickname of the “Town Clock Church.” As a bonus following the electric company takeover, the Illinois State Journal reported, “Glass dials will be put in the old town clock and will be kept lighted all night.”

Springfield Steam Supply and Electric Co. (later Springfield Electric Light & Power)  remained the city’s main power source until the city and private investors cooperated to create the Capital Electric Co. in 1894. Capital Electric was given the city street lighting contract in an arrangement that provided city government eventually would own the company’s power plant. Although it ended in controversy, the deal ultimately worked out for both sides.

Although frozen out of the street light franchise, Springfield Electric Light & Power continued to provide power to most local homes and businesses during the period. A New York-based financial syndicate took over Springfield’s private electric, gas and street car operations in 1903, creating the Springfield Gas and Electric Co.

Although Springfield took its first steps toward public power generation in the Capital Electric Co. deal, it would be nearly 30 years more before the city, led by Willis Spaulding, won the right to fully compete in the electric power market.

*Most accounts – apparently based on an incorrect date in the 1918 Springfield Gas and Electric ad – say  the Oak Ridge Park engine was installed in 1879. However, contemporary newspaper stories make it clear the display took place in 1881. The illumination began June 29 and continued through at least July.

Note: This entry has been edited to correct misinformation about the earliest private electric companies.

This entry was posted in Business, Industry, Prominent figures, Uncategorized. Bookmark the permalink.