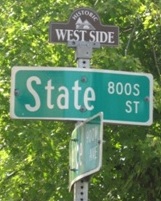 The West Side Capitol neighborhood, an area  of Springfield running west of the Statehouse, is one of five areas of Springfield that have been exhaustively studied by Fever River Research of Springfield. The resulting reports  are extraordinarily informative historical and archaeological analyses. (The West Side Capitol report formerly was available online; however, Fever River’s website was hacked in 2014, and this report is among several that, as of March 2015, had not yet been restored.)

The report focuses on the various styles of residential architecture demonstrated in the area, but also includes disquisitions on such topics as development of the Pasfield Park and Walnut Court cul-de-sacs and the impact of the Monroe Street trolley line.

This entry was posted in Fever River and tagged architecture, Neighborhoods. Bookmark the permalink.