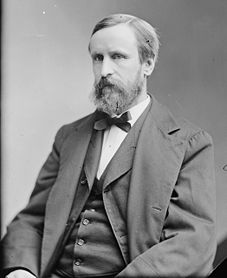 Larkin Mead (1835-1910), who designed the Lincoln Tomb State Historic Site, got his artistic start from a snow angel. Not the kind children make by lying down in snow, but an 8-foot-tall, highly detailed snow statue of the biblical Recording Angel, which Mead and a few helpers sculpted overnight on New Year’s Eve 1856 on the town square of Brattleboro, Vt.

The reaction was reported in the Annals of Brattleboro (1922):

The early risers and pedestrians about town were amazed, when they drew near, to see what appeared at a distance like a schoolboy’s work turned to a statue of such exquisite contour and grace of form. … There was a serious face, rounded arms, neck and bust and waving drapery.

It was a noble conception …”

The statue, thanks to cooperative weather, lasted two weeks and drew newspaper reporters from New York City and Massachusetts.

Mead previously had studied sculpture with the eminent Henry Kirke Brown, but at age 21, he apparently was working in a local hardware store when he molded The Snow Angel. Thanks to the ensuing publicity, he almost immediately won sculpture commissions, and his career was under way.

After spending part of the Civil War at the front, drawing illustrations for Harper’s Weekly, Mead traveled to Italy, where hemarried and spent most of the rest of his life.

When the Lincoln Monument Association announced its contest to design Abraham Lincoln’s tomb in 1868, 37 proposals were submitted by 31 artists, including  two by Mead.  The association chose Mead’s vision of a nearly unadorned monument base, surmounted by an obelisk and a terrace displaying six bronze sculptures — an eight-foot-tall statue of Lincoln, the U.S. coat of arms and statue groups representing Civil War military branches: infantry, cavalry, artillery and navy. (For more about the design selection process, see the spring 1957 Journal of the Illinois State Historical Society.) 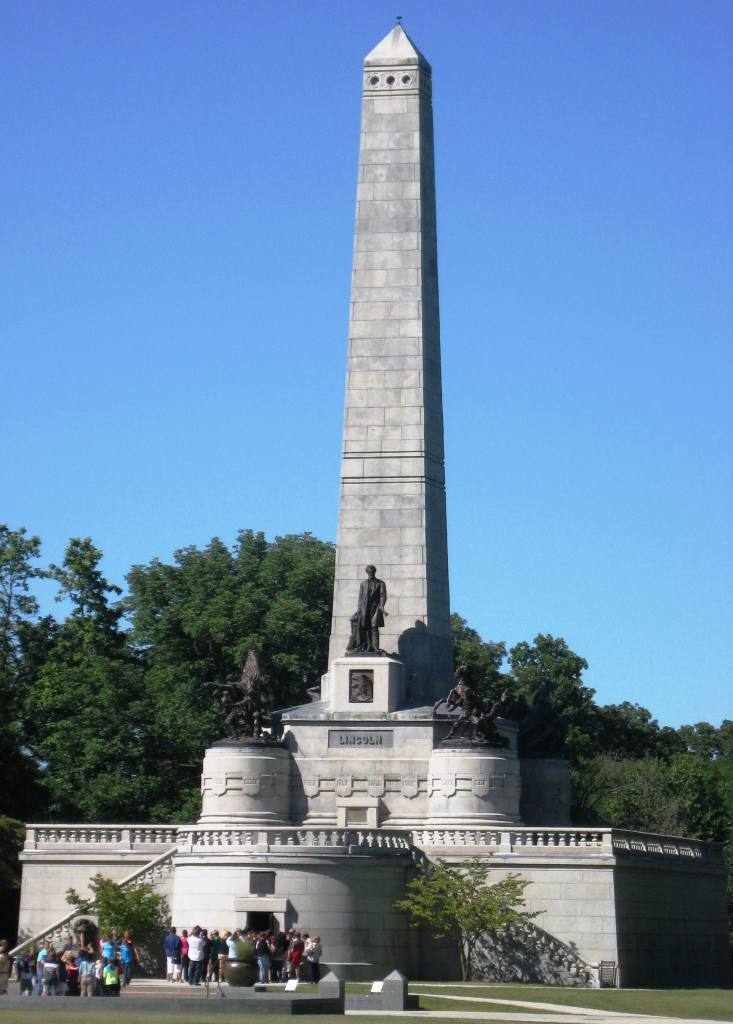 The exterior of the tomb today largely reflects Mead’s concept, although the obelisk was raised 15 feet, to its present 117 feet above ground, when the tomb was rebuilt in 1900-01. The other major exterior change, installation of the bronze Gutzon Borglum bust of Lincoln, a favorite of visitors who rub the nose, was added during another reconstruction in 1930-31. 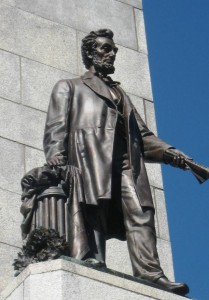 Mead received a $1,000 prize for winning the design competition and another $5,500 for related drawings and specifications, but the statuary was the lucrative part of the design. Mead was paid $13,700 each for the Lincoln statue and the four military groups, plus $1,500 for the coat of arms.  The statue of Lincoln was unveiled as part of the tomb’s dedication on Oct. 15, 1874. The last of the military groups, the cavalry, was completed in 1883.

Mead is buried in Florence, Italy. Appropriately, a statue of The Recording Angel stands over his grave.