The mystery of what happened to St. Joseph School’s statue of Patrick Henry may never be solved. But the question of how a life-sized marble sculpture of a Protestant patriot happened to stand above the entrance of a Catholic school is easier to answer: the statue was the idea of Rev. Patrick J. O’Reilly (1854-1930), pastor of St. Joseph Church from 1907 until his death.

O’Reilly oversaw construction of the parish’s new three-story school, which opened in 1911. (The new school replaced a tiny four-room building that dated from 1877; according to one newspaper article, the first school in 1881 housed 150 students. Remodeled many times over the years, that school building – known by later parishioners as “the Scout hut” – was still in use, as a maintenance building, in 2017.) 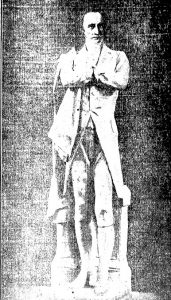 The statue in 1913 (Courtesy State Journal-Register)

The $40,000 new building at Fifth Street and Eastman Avenue held eight classrooms in the basement, first and second floors. The entire third story was taken up by an auditorium.

O’Reilly announced in June 1910 that a niche above the main entrance, which faced Fifth Street, would hold a life-size statue of American Revolution patriot Patrick Henry. The priest said St. Joe’s students had unanimously voted in favor of honoring Henry, although it’s likely that O’Reilly’s advocacy was the key element in the vote.

O’Reilly, born in Dormard, Ireland, was a fervent Irish patriot. He was ordained in Canada and came to the central Illinois Catholic diocese (then headquartered in Alton) in 1893.

The timing of his move to St. Joseph Parish was good, according to the 1928 Diamond Jubilee History of the Springfield diocese, written by Joseph Thompson. 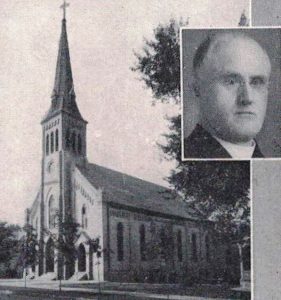 “His usual good luck waited on Father O’Reilly at St. Joseph,” Thompson wrote. “Before this there were only three respectable things in the parish, the organ, the altar, and the debt.”

When the parish was founded in 1875, parishioners were mainly Irish. By 1907, however, its membership was more diverse and growing with Springfield’s north end. Most members of the parish were working-class, but they were willing to open their wallets to support the parish. O’Reilly, an industrious fundraiser, also was able to attract donations from outside the parish – and even, he said once, from many non-Catholics.

Aside from building the new school, O’Reilly also raised money to renovate the church building and expand the rectory – not to mention commission the statue of Patrick Henry.

O’Reilly said he got the idea for the statue from an Alton Catholic parish that had erected a statue of another Protestant patriot, George Washington. Henry, he said, was appropriate for the place of honor at St. Joseph School because he had been, in a sense, Illinois’ first governor – Henry was governor of Virginia when that state’s boundaries stretched to the Mississippi River, including the area that eventually became Illinois.

It’s also likely, however, that Henry’s antipathy to Britain appealed to O’Reilly’s Irish sentiments. A surprise feature of the dedication ceremony for the new school building in 1911, for example, was Springfield Ald. Joseph Farris’ proposal of a resolution calling for Ireland to be free of British rule. The mostly Irish crowd adopted the resolution unanimously.

The six-foot-tall statue of Henry was sculpted in Italy of white Carrara marble and shipped to Springfield. No estimate of the total cost ever appeared in local newspaper stories, but most of the expense apparently was covered by another O’Reilly brainstorm: a baseball game pitting the St. Joseph school team against a team from Stuart School, a public school. 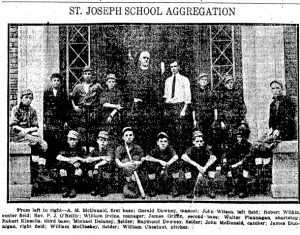 The well-publicized game, which took place on Sept. 27, 1913, at Three-I League Park, was attended by about 1,000 people, including Gov. Edward Dunne, Mayor John Schnepp, the Springfield City Council and, for some reason, the mayor and city council of Jacksonville. (The St. Joseph team won, 6-5, thanks to a bases-clearing triple by Robert Kinsella, son of Springfield baseball entrepreneur Dick Kinsella; the younger Kinsella went on to play four games for the major-league New York Giants).

The name of the sculptor who created the statue is unclear – or at least, incomplete. Both the Illinois State Journal and the Illinois State Register mentioned only a last name, and then apparently only once each. The Register described the work as “a beautiful Carrara marble statue of Henry, brought from Italy, and the work of the great sculptor Bianchi.”

With no last name, it’s impossible to determine if the artist might have been Achille Bianchi, a Roman sculptor who mainly sculpted religious pieces (he would have been about 75 years old when Springfield’s Patrick Henry was completed) or someone else. It’s even possible the name of the sculptor may simply have been misunderstood. “Bianchi,” meaning “white,” is a form of Carrara marble. 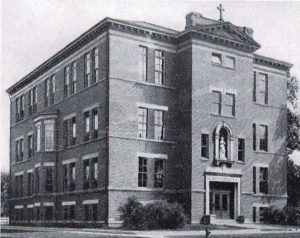 The statue, which depicted Henry standing with arms crossed over his chest, supposedly reproduced Henry’s stance after he made his radical proposals denouncing the Stamp Act on May 30, 1765.

The statue’s dedication on Nov. 30, 1913, was a major civic event. Here’s the start of the Illinois State Journal’s story the next day.

In a downpour of rain yesterday afternoon Mrs. Harry Coskien, a lineal descendant of Patrick Henry, pulling a red, white and blue ribbon, unveiled the statue of the noted patriot at St. Joseph’s Catholic school. …

The ceremony was participated in by Governor Edward F. Dunne, former Governor Richard Yates and Rev. Father O’Reilly, pastor of St. Joseph’s parish. Over 500 enthusiastic men, women and children braved the incluement weather and stood attentively bareheaded in front of the school in the rain as Father O’Reilly paid tribute to the country’s most noted statesman.

The statue occupies a niche above the entrance to the school, where the children of the parish, as they go to and from their daily studies, may be reminded of patriotism, non-patriotism and non-sectarianism, which the subject exemplifies more than any other American patriot.

Father O’Reilly, in opening the ceremonies, said in part:

“When the idea of placing the statue of an American citizen who, by the children of St. Joseph’s school choice, was the ideal American patriot, at the school building was first broached, it was taken as a joke. But upon explanation that the statue was to act as an inspiration to good citizenship and patriotism, the proposal met with immediate favor.”

Patrick Henry remained in the niche for more than 50 years, surviving generations of Catholic schoolboys (William D. Conway, later an associate judge, was among a group of “Goosetown” boys who once painted the statue green for St. Patrick’s Day) and even a major fire on May 14, 1949. The blaze devastated the second and third floors of the school; it was rebuilt without the third floor, but still with Patrick Henry. The statue also remained after a new addition substantially expanded St. Joseph School in the 1950s.

However, Patrick Henry was taken from his niche sometime during the pastorate of another Irish “builder” priest, the Rev. Edward Gorman (1910-95). Gorman, who ministered at St. Joes from 1962 to 1976, oversaw construction of a new, modern church, dedicated in 1968, to replace the one built in 1877. 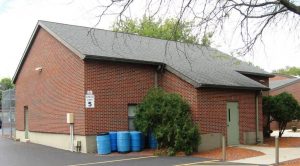 Gorman reportedly believed the Patrick Henry statue’s position above the old school entrance was precarious. He had it removed in the name of safety, although longtime parishioners no longer remember exactly when that took place. In contrast to the widely publicized installation of the statue, there was no mention of the removal in the Springfield papers.

Jerry Sams, a parishioner who worked as the school’s maintenance man for a period while Gorman was pastor, said the statue was stored in the Scout hut immediately after it was taken down. Patrick Henry’s fate after that, however, is unknown. (No similar statues turn up in Internet searches.)

With enrollment at St. Joseph down to fewer than 100 children, the Catholic Diocese of Springfield closed the school at the end of the 2012 school year. The old school now houses social service agencies.

The statue that stands in front of the building is of St. Joseph himself.

Hat tip: Thanks to Jerry Sams and other St. Joseph parishioners for their help. (Full disclosure: SangamonLink editor Mike Kienzler is a St. Joseph School graduate.)

This entry was posted in Architecture, Arts and letters, Buildings, Churches, Education, Schools and school districts. Bookmark the permalink.