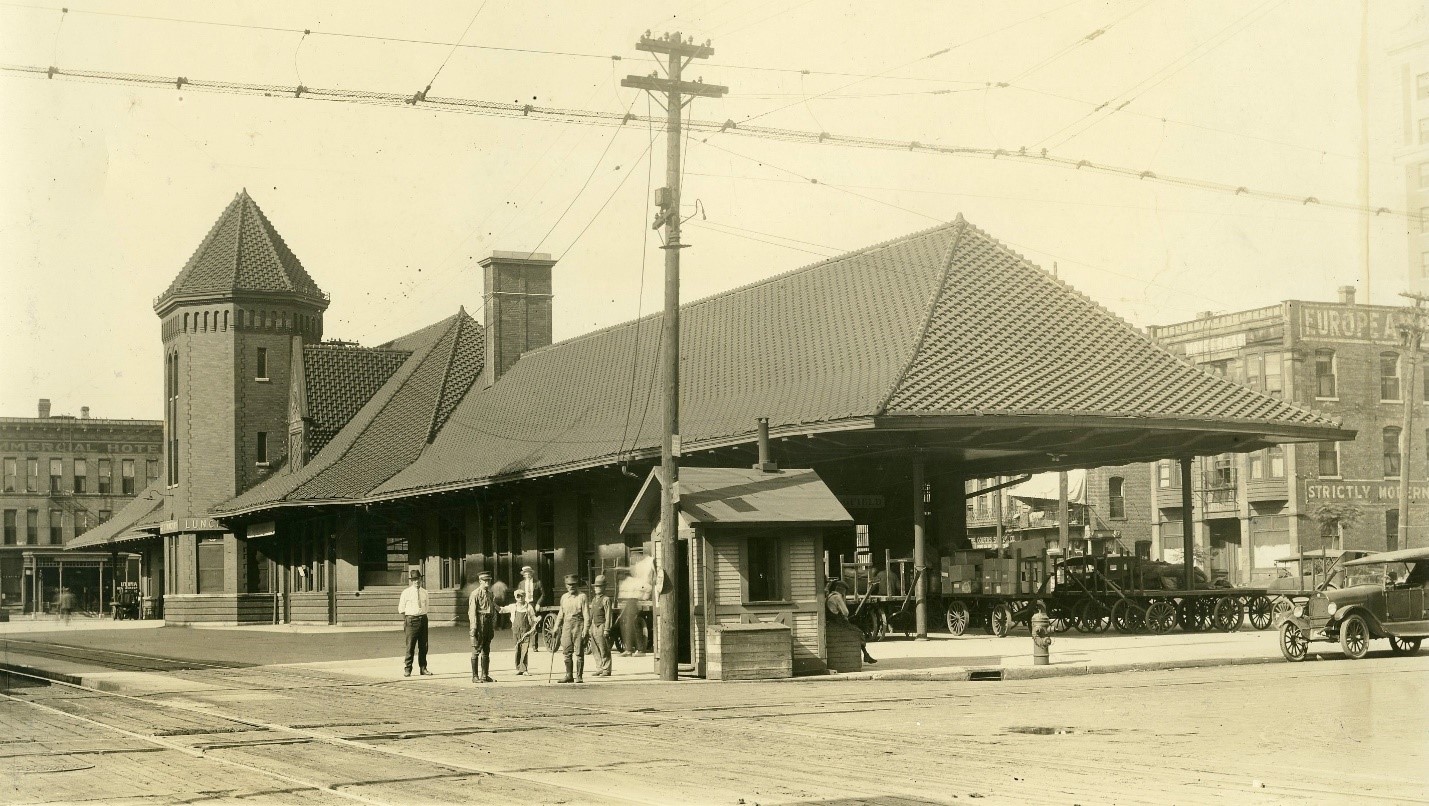 The Chicago & Alton station, early 1900s. The baggage room was at this (south) end of the station. (Sangamon Valley Collection)

Ten men eventually went to prison for a 1923 mail robbery the Illinois State Journal called “the most daring ever staged in this city.”

The gang struck at 1:20 a.m. April 1, 1923, at the Chicago & Alton railway station at Third and Jefferson streets (site of today’s Amtrak station). Post office truck driver Joseph Harney had just delivered mail to an outgoing train and loaded incoming mail on his truck when he was confronted by a half-dozen robbers carrying pistols and shotguns. None wore masks.

One of the bandits hit Harney in the head with the butt of his shotgun while others held railroad employees at bay. The rest grabbed five bags of mail off Harney’s truck.

A.W. Tyler, C&A special agent, was in the dispatcher’s office. When the first shot was fired he rushed to the west door of the baggage room and was greeted with a volley of shots. He retreated to the dispatcher’s office. Dispatcher O.B. White, George Seiders, car inspector, and Tyler retreated through a back door into the ladies’ rest room for safety.

“I turned out the lights at the first report, and hid under the table,” White said. “When Tyler went to the door I looked through the window into the baggage room and hurried back to get under the desk.”

In a chaotic scene, the gang raced out of the station shooting wildly at other rail workers, bystanders and nearby buildings.

The bandits poured a stream of fire across the street at the offices of the Springfield Transfer company, from where the call was made for the police. A number of taxi cab drivers were held at bay by the continuous rain of lead. …

The firing of what was estimated by E.P. Rowe, yardmaster, as forty shots by the bandits aroused person within a radius of four blocks of the station. Guests at the St. Nicholas hotel and other nearby hotels and rooming houses together with others rushed to the scene of the robbery.

The only casualty of the hail of gunfire was a man standing outside the transfer company. His left leg was grazed by a bullet.

The gunplay also attracted police. While most of the gang escaped in a waiting automobile, one of the robbers ran east down Jefferson Street; police officer Myron Cantrall cornered him in a nearby alley. The man later was identified as Byron “Pee Wee” Shelton of St. Louis (apparently no relation to the famous Shelton Brothers of southern Illinois).

The car carrying the other robbers first headed south on Fourth Street, but then drove to northeast Springfield. Gunny sacks holding about half the stolen mail were found in an alley behind the 1300 block of East Division Street. The robbery netted the men a few hundred dollars, at most; they left behind other bags with cash and securities worth perhaps $125,000, according to later newspaper stories.

As authorities later put it together, the holdup was a combined operation of St. Louis and Springfield gangsters. If newspaper stories can be believed, the St. Louis group was affiliated with one of that city’s leading gangs, Egan’s Rats, and some of those arrested supposedly had nicknames that came straight out of “Guys and Dolls” – “Red,” “Two Gun,” “Dago Mike” and “Slats” in addition to “Pee Wee.” (Whether the nicknames were accurate, however, is problematic – the newspapers struggled even with the arrested men’s given names. In various stories, for example, St. Louisan Morris Rudinsky was identified as “Red Dudinsky,” “Maurice Rudinsky” and “Morris Rudensky.” Then there was “Mike ‘Dago Red’ Bowman,” or maybe “Joe Bouman” or – apparently correctly – “Joe Bowman.”)

Four of the St. Louis crew – Shelton, Rudinsky, Bowman and Roy Madison (allegedly nicknamed “Two Gun”) – were convicted in December 1923 of robbery and stolen mail charges. They were sentenced to 25 years in federal prison.

A fifth, Claude Smith, was acquitted, and robbery charges were dropped against a sixth man, Frank Stagner. The state’s case against both collapsed when Viola Martin, a Springfield woman expected to be the key witness against them, left the state – perhaps under her own volition, perhaps not. James Kirby of Springfield later pleaded guilty to driving Martin to Missouri in a stolen car and to violation of the Mann Act “white slave” law.

However, both Smith and Stagner pleaded guilty shortly after the trial to conspiracy to rob the mails; they served short jail terms.

In 1925, authorities indicted four others – Elmer “Slats” Vigas and Joe Melling of Springfield and Lawrence O’Brien and Sam Kotofsky of St. Louis – for their parts in the robbery. Vigas and Kotofsky, a St. Louis tailor, planned the heist, according to authorities, while Melling and O’Brien were getaway drivers (Melling was thought to have been the driver who panicked and drove off in mid-robbery).

After a trial in which Shelton testified for the prosecution, Vigas, O’Brien and Kotofsky were convicted and also sentenced to 25 years in Leavenworth federal prison. Melling had to be tried separately after undergoing an emergency appendectomy. He was convicted later of both the Springfield robbery and of robbing the Alton post office in May 1924. Melling had been a hotel clerk and sold Cadillac automobiles in Springfield.

Elmer Vigas (last name misspelled), top, and John Hartnett following their arrest for the train robbery. The drawings probably were done by Alfred Harkness, a remarkable illustrator who worked in Springfield at the time (courtesy SJR)

Vigas was a “huckster” who sold vegetables from a wagon, the Journal said in its story about his 1925 arrest. “Of recent years he has not figured in police circles,” the newspaper said.

A decade earlier, however, Vigas had been charged with a daredevil train stickup that the Illinois State Register said eclipsed “the wildest dreams of the yellowback novel.” In that case, two men stopped a  Kansas City-bound Chicago & Alton train south of Springfield’s Iles Junction on Christmas Eve 1912.

(M)asked men, who had been riding on the blind baggage of the Alton “Hummer,” climbed over the tender, covered the engineer and fireman with their guns and ordered them to “stop.”

Compelling the fireman to uncouple the engine and National Express baggage car from the rest of the train, the robbers ran the engine ahead a short distance. One robber covered the engineer and fireman while another made five unsuccessful attempts to blow the express safe – two with nitro glycerine (sic) and three with dynamite.

The robbers worked forty-five minutes in the baggage car, thus giving a switch engine, carrying the officers, ample time to reach the scene, when they fled and (a) running fight followed.

A sack of corporation bonds, and what are thought to be lottery tickets, as well as a number of small packages were taken from the safe by the bandits, who later threw away the loot as the posse were in close pursuit. …

The Alton “Hummer” is known by railroad officials as a “heavy money train.” The baggage car was loaded with valuable Christmas packages for points between this city and Kansas City.

The two robbers escaped through a nearby field as police and others – conveyed by the switch engine, automobiles and, in one case, a horse and buggy – arrived at the train, the Register reported.

Vigas (whose last name newspapers spelled “Vigus” in stories about the 1912 case) was arrested with Jack Hartnett, a former saloon owner from Chicago, a few hours after the robbery. The two gunmen used white handkerchiefs as masks, but railroad employees claimed they could identify Vigas and Hartnett from their general physiques, their voices and Hartnett’s limp.

At their trial in February 1913, however, Vigas and Hartnett both produced alibi witnesses, and, after drawn-out deliberations – the Journal said jurors took 19 ballots, the Register said 17 – the jury found the men not guilty.

Hat tips: Thanks to commenter Gordon Carncross for correcting the first name of his grandfather, Hubbard Perkins. And thanks again to Phil Shadid for correcting my mistake about the route of the Alton Hummer.

This entry was posted in Crime and vice, Law enforcement, Railroads, Transportation. Bookmark the permalink.