Menard Hall, with its A. Lincoln Commons, is at the center of LLCC’s campus. (SCHS photo)

Lincoln Land Community College held its first classes on Sept. 23, 1968, in temporary buildings on a temporary site. Even the name was temporary.

LLCC – officially known as Lincoln Land Junior College until two weeks after classes began –was first housed in a half-dozen quickly constructed buildings on Sixth Street near the Hazel Dell interchange with Interstate 55. The school’s nickname there was “Plywood U.”

The idea for the college had come together quickly. Representatives of 23 school districts from eight area counties formed a committee in April 1966 to explore the idea of a public junior college. 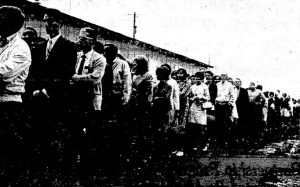 Under state law, creation of the district had to be approved separately by both urban and rural voters, and George Hoffmann, who spearheaded the Springfield higher education committee, said in March 1966 he thought city voters would reject the idea of a junior college. (In fact, they had done so convincingly in 1961; see below.) Since Springfield voters would have made up an overwhelming majority of the proposed district’s urban electorate, a loss in Springfield would have doomed the 1967 effort.

To avoid that possibility, the referendum plan organized by the Lincoln Land Junior College Association created a donut-shaped community college district, one that surrounded, but did not include, the Springfield School District. Voters approved the plan on Feb. 25, 1967 (the date has been misreported by the college itself; see “More information” note below). Totals were 5,045 “yes” and 3,350 “no” in incorporated areas and 3,764 “yes” and 2,772 “no” in rural areas.

Once the Lincoln Land district came into being, however, Springfield had an alternative way to join: annexation. The key was that annexation, under a state law written solely for Springfield, required only a vote by the Springfield School Board. The board filed the necessary paperwork in December 1967.

The annexation still could have been overturned by a “backdoor” referendum if 10 percent of school district residents had signed petitions to hold one. But no petitions were filed, and Springfield joined the Lincoln Land district in early 1968.

The annexation also had the effect of immediately doubling the value of property in the college district, which was partially supported by property taxes. (After LLCC district voters OKed a construction bond issue in December 1968, the college’s initial property tax bill came to about 12 cents per $100 of assessed valuation.)

By then also, Springfield had been assured that the state would create a Springfield-based “senior” college – one offering a third- and fourth-year college curriculum, as well as the opportunity to obtain master’s degrees in some fields. Sangamon State University (now a full four-year school renamed the University of Illinois Springfield) held its first classes on Sept. 30, 1970.

Meanwhile, Dr. Robert Poorman, formerly dean of students at Bakersfield College in California, was appointed LLCC’s first president in October 1967. He retired in 1988. LLCC held its first commencement ceremony on June 4, 1970; 150 students were in that graduating class. 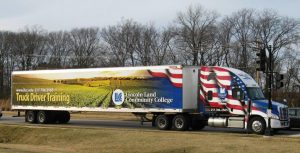 As of its 50th anniversary in 2017, the school had graduated 43,000 people. In 2017, LLCC took in all or part of 15 counties, making it the largest community college district in Illinois. Its main campus near Lake Springfield occupied 220 acres, and satellite facilities were in Jacksonville, Beardstown, Taylorville, Litchfield and downtown Springfield and at Abraham Lincoln Capital Airport.

George Hoffmann’s skepticism about Springfield support for a new junior college in 1967 was based largely on the results of a city-only referendum held March 4, 1961. The vote then was 14,355 “no” to only 2,992 “yes.”

There was a major difference between the 1961 and 1967 ideas, however. The earlier proposal, which originated with the Springfield School Board and Mayor Lester Collins, would have created a junior college district with the same boundaries as the city public school district. 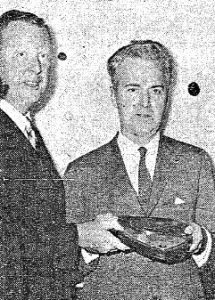 The 1961 opponents argued a public junior college would pull students away from the Catholic-operated Springfield Junior College (later Springfield College in Illinois) and that the proposed tax rate (5 cents per $100 of assessed value) was too low. Among the opponents were the Association of Commerce and Industry, a forerunner of the Greater Springfield Chamber of Commerce, and the Illinois Taxpayers Federation.

Hoffmann, who supported the 1961 proposal, said after the defeat that the subject would come up again. “It will be evident … in three or four more years, to a majority of citizens, that a public junior college will be necessary if a private four-year college or branch of the University of Illinois is not then established here,” he said.

Hoffmann (1903-93) was named the 1969 Copley First Citizen.  He had been active in a variety of civic pursuits, but the award was given largely because of Hoffmann’s decade-long leadership in the effort that led to the creation of Sangamon State.

More information: The timing of LLCC’s 50th anniversary observance in February 2017 was designed to recognize the referendum that created the original college district. A 50th anniversary timeline identifies many of the major events in the college’s history.

However, information distributed by the college – the timeline, LLCC’s anniversary homepage, and a February 2017 State Journal-Register column by college president Charlotte Warren – includes the wrong date (Feb. 23, 1967) for the referendum. Illinois State Journal coverage from 1967 makes it clear that the

When queried by SangamonLink, which discovered the discrepancy, a college spokeswoman said the Feb. 23 date was based on documents in LLCC’s archives.