“The Greatest Show on Earth” might have been at the height of its glory when the Ringling Bros. and Barnum & Bailey Circus arrived in Springfield on Aug. 28, 1933. 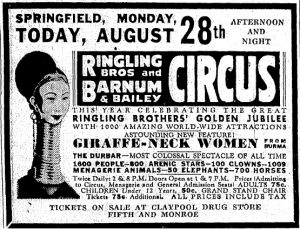 The traveling Big Top promised 100 clowns and 800 “arenic performers” among its 1,600 workers. The show featured a precise 1,009 menagerie animals (plus 700 horses), and – in a nod to the circus’ yearlong celebration of the Ringling Bros. 50th anniversary – 50 elephants.

Even the transportation was a spectacle. Ringling Bros. required four trains, hauling 100 oversize cars – silver, labeled with crimson letters bordered in green — to carry the show from town to town.

The train, traveling from St. Louis, arrived in Springfield about 8 a.m. May 28, and a classic circus parade began near downtown. The Illinois State Journal (in a story that, like most of the Journal’s advance coverage, probably came straight from a Ringling press release) set the scene:

(T)he gay, exciting cavalcade – elephants lumbering, camels plodding, zebras bouncing, ring horses cantering and red wagons rolling – will move toward the show grounds at Eleventh street and Black avenue, where performances will be given at 2 and 8 today, in the world’s largest big top. …

Doors would open an hour early, the Journal reported, so circus-goers could enjoy the world’s “mightiest traveling zoo,” star of which was Andy, the only baby giraffe in captivity.

The giant “hippodrome oval” – the Big Top – housed five rings in order to accommodate all the acts. Trapeze artists alone included the Marcellus Flying Ballet Plastique, the Royal Aerial Rooneys, the Flying Codonas, the Concellos and the Harolds, Al Powell (“hurtling comet of the flying trapeze”), Luicita Leer “aerial star direct from a triumphal European engagement”), Antoinette (“only girl aerialist ever to accomplish a double-and-a-half somersault in mid-air to a catch”), and the Clarks and the Smiths (“English aerial marvels”).

The circus had at least three tight-wire acts; the Wallendas, who continued to perform into the 21st century, didn’t even get top billing. That went to “the great Con Colleano, somersaulting star of stars on the tight wire.”

Other daredevils, big cats and 100 clowns rounded out your 75 cents (50 cents for kids) worth of entertainment. But based on Ringling Bros. publicity, two attractions stood out.

The first was the Durbar, the show’s opening spectacle. The circus promised …

a reproduction of India’s magnificent coronation ceremonial, with over two thousand people and animals participating, with the fifty elephants in gem-studded robes and towering head-dresses, with horses in shimmering, jeweled robes and Hindu maharajahs and ranees in gorgeous native ceremonial apparel, leading the exotic pageantry.

The other headliner, heavily featured in newspaper ads, was “the Royal Padaung giraffe-neck women from Burma.”

With their unbelievable long necks, encircled by copper rings, superimposed, band by band, year by year, from infancy to maturity, and with 60 pounds of copper anklets each, these strange Burmese belles have come from the tiger infested jungles of Asia to startle the occidental world. They are unquestionably the most astounding discovery of  the age.

In grand circus tradition, the show went on “despite threatening weather,” the Journal reported, and big crowds attended both performances.

The Ringling Bros. and Barnum & Bailey train pulled out of Springfield, headed for repeat performances in Peoria, early May 29.

This entry was posted in Amusements, Spectacles. Bookmark the permalink.