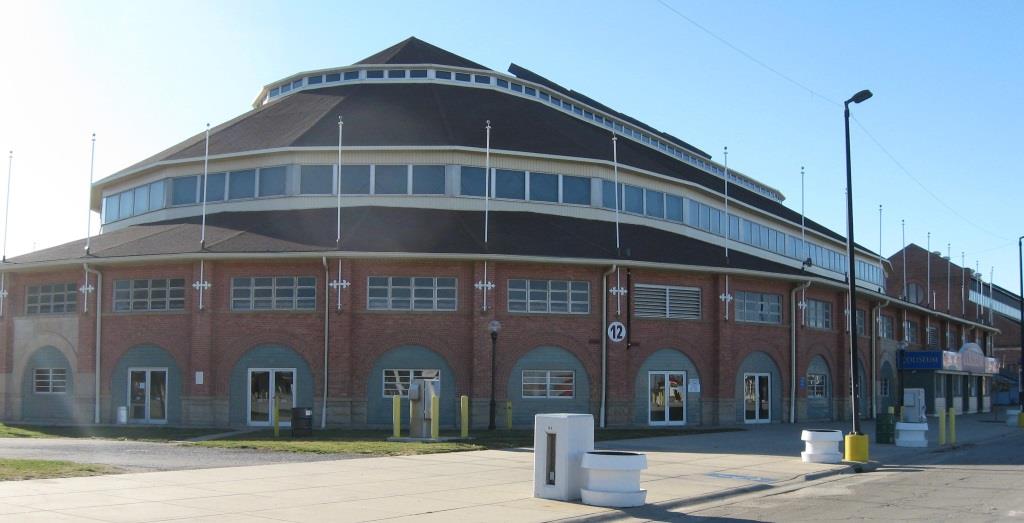 The Illinois State Fairgrounds Coliseum was a huge hit when it first opened to fairgoers in 1901. But not huge enough, because the building had to be substantially expanded only two years later.

The Coliseum was designed in 1901 by W.H. Reeves of the then-prominent Peoria architectural firm of Reeves and Baillie. The main purpose was to accommodate horse shows and livestock competitions. Plans originally called for a 200-by-225-foot building, but finances forced the size to be reduced to 125 feet by 175 feet. It wasn’t large enough.

“Although the state fair is drawing toward its close, the coliseum building is still a place where crowds congregate daily,” the Illinois State Register reported on Oct. 4, 1901 (fairs were held in the fall then). “During yesterday afternoon it was almost impossible to gain an entrance, so dense was the crowd.”

Besides livestock events, other early uses of the Coliseum included vaudeville performances, often sponsored by George Chatterton, owner of the fabled Chatterton Opera House in downtown Springfield. Presumably, shows like “Barnes & Sarcho’s Great Water Circus,” a April 1902 extravaganza that featured a team of diving elk and a singing donkey, wouldn’t have worked in a conventional theater.

The central Illinois district high school basketball tournament was held in a chilly Coliseum in 1933.

The Coliseum got a second major facelift in 1958. The $600,000 project closed the previously open-air arches, created a glass entrance/ticket booth and replaced the building’s wooden seats with metal ones.

In 2016, however, an engineering study found corrosion in support beams, roof leaks and missing bolts and screws in support elements, among other problems. The building was shut down for the 2017 and 2018 fairs, and state officials set aside $12.7 million to make the repairs.

Illinois Agri-News reported Aug. 1 that the Coliseum’s steel columns were reinforced and sealed to stop rusting and rotted beams replaced and reinforced. Energy-efficient fixtures, including  LED lighting and 250 energy-efficient windows were installed. Ceiling fans also have been added, the newsletter said, although the next round of improvements are to include a heating and cooling system, which would let the building be used year-round.

The Coliseum reopened for the 2019 fair.