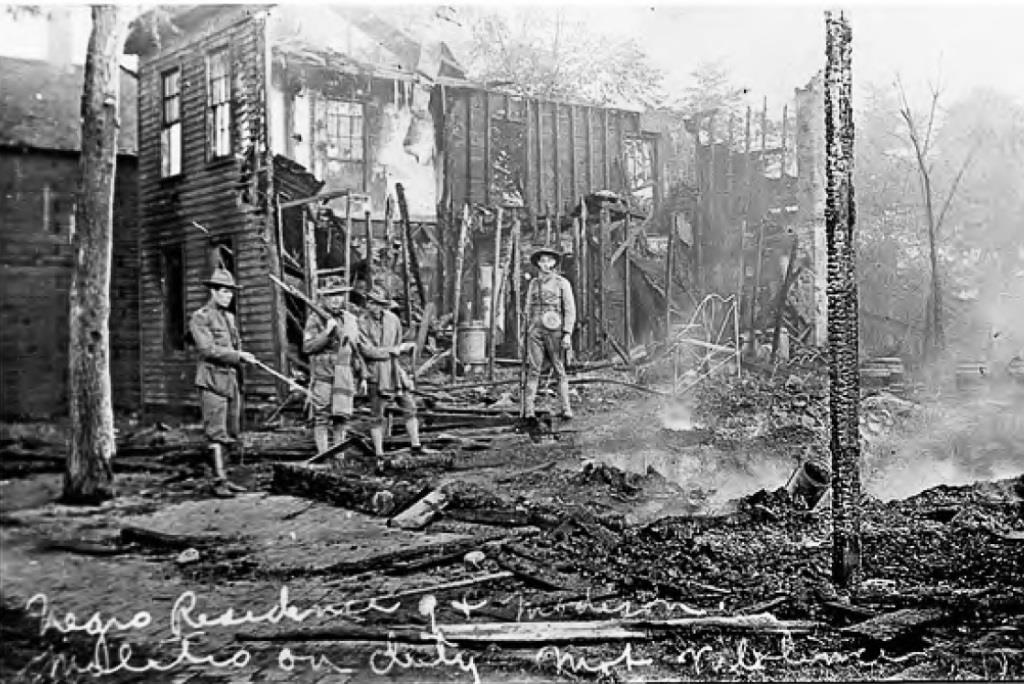 “This image (from the aftermath of the 1908 Springfield Race Riot) depicts the former “house of ill fame” initially established in the early 1870s by Emma Nash (aka Emma Taylor), and later occupied by Mabel Baxter at 913-915 East Madison Street. The adjacent building, located at 917 East Madison Street, was occupied by Charles Baxter beginning in 1896 as a saloon. It lies completely destroyed in this image. In 1908, the Baxter Resort had been closed, and this was probably the D.C. Neal residence (the manager of the adjacent saloon at the time of the riot).”  Caption by Floyd Mansberger and Christopher Stratton, 2016

Note: This entry is based on research done by Floyd Mansberger and Christopher Stratton of Fever River Research for the city of Springfield and Federal Railroad Administration in connection with the Springfield Rail Improvements Project. Their full 358-page report, published in 2016, focuses on the remains of several houses along 10th Street that were destroyed during the Springfield Race Riot of 1908. In the process, however, they also cover the history of vice in Springfield, of the old Levee and of nearby neighborhoods in far more detail than is possible in this entry.

The Mansberger/Stratton report also includes maps of the Levee and Badlands slum/vice neighborhoods, other maps showing some of the areas damaged during the race riot, and a comprehensive collection of photographs of the riot’s aftermath, among much more. SangamonLink strongly recommends that interested people read the report itself. It can be found here.

At the turn of the 20th century, “Cocaine Alley” was the toughest part of the Levee, Springfield’s toughest neighborhood.

The name “Levee,” as applied to Springfield’s vice district, apparently made its first appearance in local newspapers in 1886, Mansberger and Stratton found. It was a new enough label then, they wrote, that the writer of the newspaper story (which involved a saloon fight) “felt that he needed to define his term: He wrote that ‘that portion of Washington Street upon which the affair occurred is called by police “the levee” and abounds in groggeries at which the worst characters of the city congregate.’”

The Levee originally took in only the 700 and 800 blocks of East Washington Street, but the description later expanded to include both Jefferson and Washington streets from Seventh to 10th streets.

In In Lincoln’s Shadow: The 1908 Race Riot in Springfield, Illinois (originally The Sociogenesis of a Race Riot, 2008), Roberta Senechal outlined what the Levee offered:

The Levee consisted mostly of two- and three-story brick buildings, which housed saloons, small restaurants, pawnshops and assorted small businesses on the ground level and cheap, squalid rental units on the upper floors. The East Washington Street blocks of the Levee contained most of the city’s black businesses, barbershops, saloons, little restaurant, pool halls and grocery stores. A few businesses – both black and white – concealed less legitimate enterprises behind their doors. Indeed, the Levee was the neighborhood where local “sports,” tourists and others could indulge their taste for liquor, gambling, and “ladies of the evening.”

Apartments above Washington Street may have been squalid, but they apparently were luxurious in comparison to the shacks that lined the alleys behind the buildings on both sides of the street. The south-side alley, in particular, became known as “Cocaine Alley” in the late 1890s.

The Illinois State Journal warned in July 1899 that “(t)he pernicious practice of eating and snuffing cocaine has reached alarming proportions among the lower strata in the city of Springfield.”

Dozens of men and women are wildly intoxicated every day on the drug, and much of the time of the police is taken in regulating the conducts of the residents of “cocaine alley,” where many of the victims are congregated.

“Cocaine alley” is located in the rear of the business houses on the south side of Washington street, between Eighth and Ninth streets. Men and women, both negroes and whites, and all ages, congregate there daily to indulge in the deadly dissipation. It is in this alley that many of the robberies of visitors to the city have been committed. … Efforts have been made year after year to clean out this district but thus far the officers have succeeded only in holding the offenders in check.

Cocaine was a legal drug at the time and was widely sold by pharmacists. Users either swallowed it directly, the story said, or, preferably, dissolved it in water and “snuffed (it) into the nose.”

“Cocaine is cheap compared with the quantity of beer or whisky essential to produce thorough intoxication, and this fact greatly increases its popularity,” the Journal said.

The story identified a half-dozen of the most flagrant alley residents, all but one African-American, but focused on the one white habitue: Ella Wilborn Ellemore. “She is only fifteen years old but is already a mental, physical and moral wreck,” the Journal reported. “The girl has used the drug so long she cannot do without it, and when under the influence of the drug she is dangerous.”

In a story published on Christmas Eve 1900, the Illinois State Register described life among residents of the alley.

Probably in no city the size of Springfield in the western country are there so many persons living depraved lives. Day after day, in certain parts of the city, there are large numbers of men and women, white and black alike, who live on money that is obtained in some unlawful manner. In the city there are also a large number of “shacks.” In the majority of these “shacks,” which as a rule are not much larger than a dry goods box, several men and women live. White and black are to be seen at all times of day and night prowling about the streets. Near Eighth and Washington streets there are a number of these haunts. …

Kate Boehner, better known as “Trilby,” also resides in the immediate vicinity. … Not long ago the police gave her notice to leave, and she, with the aid of a wheel-barrow, moved her small amount of furniture to another end of town. She could not resist the strong temptation of what in the past was known as “Cocaine Alley,” and is again to be seen there.

There are several other small “shacks” there, none of which are more than six feet square. The houses are filthy, and no doubt infested with vermin. The filth that is accumulated there will no doubt in a course of time breed disease. On one of the “shacks” in the alley there is a sign which is home painted, and bears the following inscription: “Furnished Rooms to rent.” In this place there is not room enough for a bed, and it must be that the furnished room sign means “Standing room only.”

“Cocaine Alley,” which for several years existed, was some time ago broken up by the police. When this raid was made on the “joints” there were about fifty residents. They moved, but only for a short time, and they returned. There are now probably twenty-five or more persons who congregate in the alley, and day after day they are to be seen roaming about under the influence of cocaine. A nearby drug store daily sells a large amount of the drug to the fiends, and when once with their “leepins” on there is not telling what they will do. … It is also said that there is one “joint” near the alley where an opium layout is kept and where they smoke the “pipe of imagination.”

As the 1900 story suggests, city officials tried unsuccessfully from time to time to clean up the alley, but they probably were hampered, according to Mansberger and Stratton, by the fact that “much of the land that comprised ‘Cocaine Alley’ was owned by William Florville. … Florville was probably the wealthiest black man in Springfield at the time, and he was not agreeable to the demolition of his properties.”

Finally, city public health officials embarked on what they called a “crusade” to eliminate Cocaine Alley in 1903. That attempt also was stymied at first by a variety of legal issues. In August 1905, however, the Journal, reporting on a different cleanup, said:

Two years ago war was declared on similar resorts in old ‘Cocaine alley,’ which has since passed into history. The alley was the loafing place for hundreds of whites and negroes who refused to work and notwithstanding the efforts of the police they continued to exist on money derived from the sale of stolen property. Finally it was determined to condemn the old shacks in which these people lived, and in the course of a few weeks all the places had disappeared, and with them went their occupants.

Confirming the destruction of the alley, the term “Cocaine Alley” almost disappears from newspaper coverage after 1903.  One exception was a December 1908 story that described one Sue Crawford as the former “queen of Cocaine Alley.”

“A crusade sent the alley into history, and Sue was the only one to remain as a resident of Springfield,” the article said.

The 1905 Journal story that reported the disappearance of Cocaine Alley involved a separate attempt to eliminate what sounds like a similar slum-and-crime neighborhood with a similarly colorful nickname: Shinbone Alley. (Like the relationship between Cocaine Alley and the Levee, Shinbone Alley was part of the larger and better known Badlands neighborhood.)

A few days ago Superintend(ent) of Health Sutton and other city officials went on a tour of investigation and found a large number of huts which they believe should be declared nuisances, and so reported to the mayor. These buildings long have been noted as fences for petty thieves and other persons who are constantly giving the police trouble and to destroy the buildings is one of the plans laid to rid the northeast part of the city of a number of its resorts. In “Shinbone alley,” which extends from Ninth street to Tenth street, between Madison and Mason streets, there are a number of hovels which the health officers found in a filthy condition and the attention of the council will be called to the matter.

However, Mansberger and Stratton write, “Again, the efforts to clean up the city were fraught with difficulty and, to many city inhabitants, the process was not moving fast enough.”

In 1906, a year after the Shinbone Alley cleanup, the Illinois State Register was still critical of city efforts, Mansberger and Stratton note: “There is an effort being made to purify the ‘red light’ district in New York city,” the newspaper wrote. “Springfield has two or three such districts and there is no effort made to purify them. It’s somebody’s time to move.”

Contributors: Floyd Mansberger and Christopher Stratton of Fever River Research, Springfield. Fever River reports are open source and may be republished without limitation. Attribution is requested.