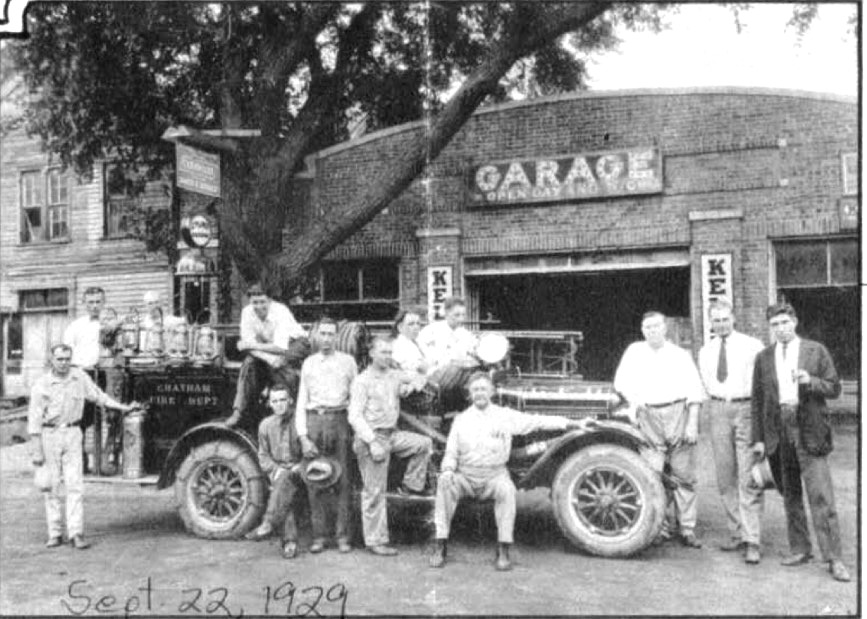 113 W. Mulberry St., Chatham — then the Everett Cary garage — is the background of this 1929 photo of the Chatham Fire Department (Photo courtesy Chatham  Area Public Library)

Note: This entry has been revised, thanks to information provided by Chatham-area Facebook users.

Buildings customarily gain historic reputations from their age or because of their connections to a prominent person or event.  We also like them decorated in an architectural style on a site where we can be sure that such-and-so was a steppingstone to a better future.

Buildings of a generic type, on the other hand, seldom receive the attention they deserve for enabling society to exist and grow. Most such buildings, in fact, don’t last as long as the simple one-story structure on the northwest edge of the Chatham village square.

The structure at 113 W. Mulberry St. has been a children’s daycare center since 1988. Over the years since its construction circa 1919, however, it has had many other uses, sometimes simultaneously – an auto garage and dealership, an appliance outlet, a candy counter, a school for the disabled, and, briefly, as a veterinarian’s office. It also has housed one of Sangamon County’s most innovative agribusinesses and served as the home of a growing Chatham church. 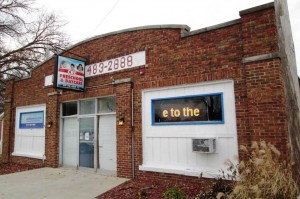 Though the 113 W. Mulberry St. building is simple in design, the decorative facade is designed to draw attention. (Keith Sculle photo)

The design of the building at 113 W. Mulberry is modest and vernacular. But the site’s connections to the early 20th century make it a true landmark, part of Chatham’s history from the time of horse-drawn transportation.

John Hederick (1856-1914), a blacksmith, purchased the lot that now is 113 W. Mulberry in 1889; six years later, he bought the adjoining the lot to the west (115 W. Mulberry.)  His blacksmith shop may have occupied the two northwest corner lots on Mulberry Street. A harness shop was immediately east of these lots. Certainly, the latter was committed to transportation, and perhaps some of the blacksmith’s labor was as well.

Hederick remained the village blacksmith until his death in December 1914. His family continued to own the property until 1918.

(As of 1917, according to a Sanborn insurance map, a fraternal lodge occupied the second floor of the frame building at 115 W. Mulberry; the first floor was vacant. Chatham resident Gary Ori adds that Chatham’s town hall shared 115 W. Mulberry with the local Masonic lodge, although it’s not clear when that began. At any rate, both the town hall and the lodges of the local Masons and Eastern Star were tenants in the building in January 1935, when 115 W. Mulberry St. was destroyed by a fire.)

The 1917 map identified a wood-frame building at 113 W. Mulberry as an auto repair shop, with gasoline storage tanks buried in front.

Since the Hederick family still owned the property, John Hederick might have converted his blacksmith shop to an auto repair garage, or a new building could have been constructed and then leased after his death. In February of 1918, the Hedericks sold the shop and lot to Ralph Butler, who bought part of the adjoining lot to the east at the same time. By May of that year, he was selling the Overland automobile in Chatham, according to newspaper advertisements.

Butler apparently had the present 6,000-square-foot brick building constructed in 1919, but his foray into automobile sales was brief. He sold the shop and lots to Charles H. Stevens in November 1919.

Stevens was a farmer by trade, but he ventured into the automobile repair business as a sideline. The 1920 U.S. census shows Stevens still working as a farmer and a young mechanic named Everett Cary (1898-1969) employed in a garage in Chatham. In 1922, Stevens sold the lots and shop to W.F. Kinkead, but the business continued to operate as Stevens and Cary into 1923. (An advertisement in the Illinois State Register in August 1922 urged drivers, “When You Stop in Chatham, Go to Stevens & Cary/Just West of the Hard Road/Open Day and Night.”)

The name of the business soon changed to the Cary Garage. For a time, Everett Cary operated the garage together with his brother Herbert, but he became the sole proprietor by 1925. Herb Cary went on to farm and operate a trucking business in Chatham.

Sometime in the next five years, Everett Cary added a Chevrolet dealership to his business, and in 1941, Everett Cary bought the shop and lots from W.F. Kinkead. (Cary also sold Frigidaire appliances; like Chevrolet, Frigidaire was a General Motors brand.)

The next owner was John Schroeder, born (1924) in Springfield. Schroeder, the son of a railroad worker, was an aerial gunnery instructor in World War II and graduated from the University of Arizona in 1949. He then worked for six years at Nelson Chevrolet in Chicago.  An ambitious young man, he lived in a single-room apartment with a pull-down bed and managed to save $10,500.

Schroeder met a farmer from the Chatham area who introduced him to Everett Cary.  Cary agreed to sell the dealership to Schroeder if Schroeder came to work for him and Cary liked him.  Schroeder started working on Jan. 1, 1955, and on July 1, 1955 was able to buy Cary’s dealership for $13,000.

From the outset, he aimed at increasing sales. Even the business’s new name, Community Chevrolet – adapted from the word “Community” painted on the sides of the school buses that flowed through town — was intended to stoke attention.  Schroeder retained Cary’s dependable staff: salesman Curt Mathews, mechanic Joe Ori, and part-time bookkeeper Eleanor Brady, whose increase to full-time work reflected Schroeder’s success.

Chatham, whose population then was 750 to 800, made up only a small part of Community Chevrolet’s market.  Schroeder, who was unmarried at the time, worked seven days a week, selling new and used automobiles in an area extending to Decatur, Jacksonville, and Petersburg. Most of his vehicles, however, were sold to Springfieldians.

Schroeder paid $300 monthly to rent the building. He also convinced the village to let him place four to six new cars (the number varied from time to time) on Mulberry Street directly across from the dealership.

Although many other dealers in the surrounding area were unhappy about his aggressive tactics, Schroeder, inteviewed by telephone in February 2016, said he believes he considerably boosted Chatham’s growth. In fact, Schroeder sold so many automobiles that the St. Louis zone manager of General Motors’ Chevrolet Division invited him to buy Springfield’s Friendly Chevrolet dealership, and Schroeder did so in November 1965.

Schroeder was not simply a self-centered profiteer.  After buying out Cary, Schroeder allowed Charley Stanley, an older man with a wooden leg, to continue selling candy to schoolchildren from a case just inside the west door of the Mulberry Street dealership.  He also sold gasoline from Schroeder’s gasoline pumps on the south side front of the Mulberry Street building.  As Schroeder remembers, Stanley had sold candy inside the building for about 20 years before Schroeder took ownership. The west-side door also gave Schroeder’s customers access to the indoor showroom on the east side of the building.

Herb Cary Trucking also continued to operate a scale house immediately west of Schroeder’s new business.  Unwilling to oust the older man, Schroeder waited for time to pass.  Eventually, the candy shop faded, and Schroder ushered out the trucking company, which ran counter to the upgraded business image he sought.

People from the village and Cary’s truck drivers had often filled the small room on the west side as a place to gather, an informal community “hangout.”  Trucks Cary had parked in the Mulberry Street building were denied continued access under Schroeder’s ownership, but eventually were provided a garage in a metal building on the west side of Schroeder’s growing business.

After Schroeder closed Community Chevrolet, the next tenant was the rapidly growing DICKEY-john Corp., founded by Chatham farmer Bob Dickey and his brother-in-law, Jack Littlejohn. The company broke into the “agrionics” business in 1966 by creating the world’s first successful planter monitor, many of which were assembled at 113 W. Mulberry St. DICKEY-john occupied the building from 1968 to 1972, when continued growth led it to move operations to Auburn.

Also growing was the Chatham Christian Church, which had been meeting in the Chatham Community Building and the basement of the Chatham Masons. The church occupied 113 W. Mulberry in August 1972 and remained there until its own new building was ready in April 1976.

But 113 W. Mulberry  wasn’t empty for long. That same year, Lee Winston and his wife started a school for the handicapped in the building.

“We found the Chevy garage in Chatham empty and for rent for four hundred dollars a month,” Winston wrote, “… and the start of L. Winston & Associates was more than a dream.”

The school first offered data-entry classes during the day and both data-entry and bookkeeping in the evening.  Requests for a carpentry course were sufficient to add that, and, later, Winston himself taught an auto mechanic course, which drew business mostly from Chathamites. By the second year, students were coming from within a 50-mile radius.

The school has trained and helped find jobs for quadriplegics, deaf mutes, mental patients, alcoholics, amputees and mentally retarded persons, Winston said. One student was a 50-year-old deaf mute who had never had a job. Another was a young woman whose fingers were amputated.

A state official once told Winston the school is the only one of its kind in the state.

(For more on this enterprise, see Winston’s 20-page typescript, School Story: L. Winston Assoc., on file at the Sangamon Valley Collection at Springfield’s Lincoln Library.)  The school closed in 1981. 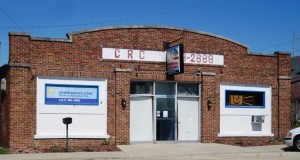 An auction house owned by James Woodward took occupancy thereafter, and the building was used as a polling place during elections from 1984 through 1986. Finally, in 1988, the CRC (Children’s Recreation Club Preschool and Daycare), operated by Sandi Perschke, moved into 113 W. Mulberry. Perschke bought the building in 1990, and the preschool remained in operation as of 2016.

Contributor: Keith A. Sculle, Ph.D,  former head of research and education at the Illinois Historic Preservation Agency, with the help of Curtis Mann and Stephanie Martin of the Sangamon Valley Collection, Lincoln Library, Springfield. Thanks also to Gary Ori, John Schroeder, Lee Winston, and Meghan Harmon of the Chatham Area Public Library District.

Information about use of the building by DICKEY-john and the Chatham Christian Church was provided by Chatham-area Facebook users and the church. Our thanks to them as well.