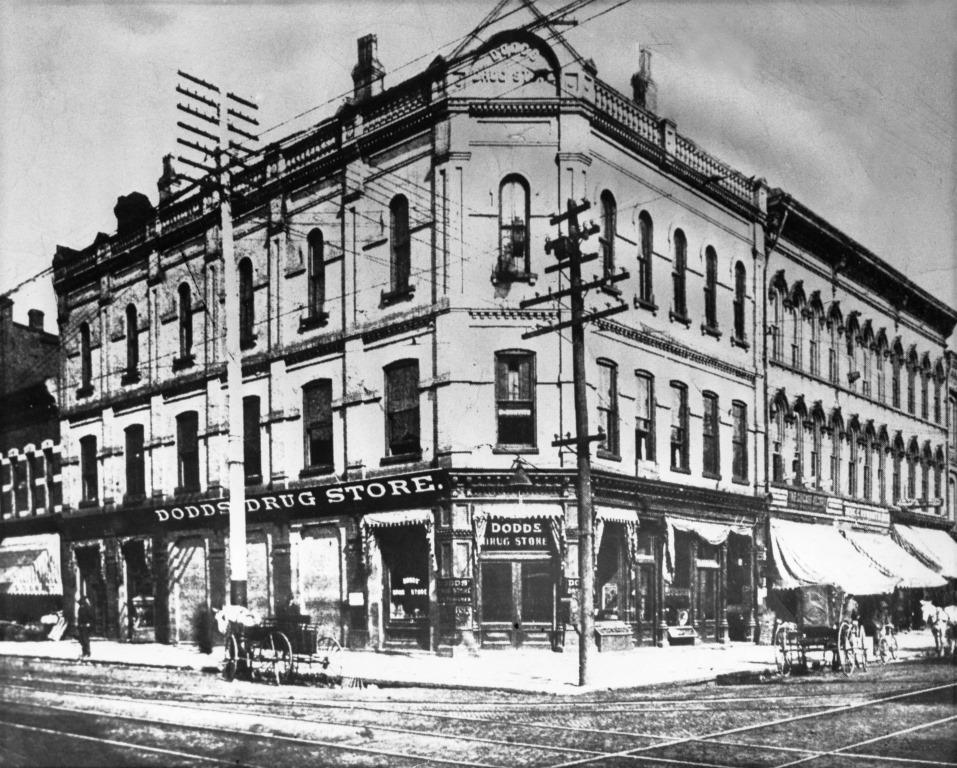 A fortuitous location made “Dodds’ Corner,” named after a drugstore on the northwest corner of Fifth and Monroe streets, one of Springfield’s best-known landmarks for more than 70 years.

Richard Dodds (1851-1921) went into business at the corner when he bought out the existing pharmacy of W.R. Beall in 1875. The drugstore became a de facto city meeting place because of the way streetcar routes were laid out.

For example, the long east-west streetcar route going through the middle of this 1916 map of the city is the Monroe Street line. As the map shows, all of Springfield’s streetcar lines converged on the three blocks from Washington Street to Capitol Avenue between Fifth and Sixth streets, especially the block southeast of Fifth and Monroe.

Dodds’ drug store was established on the corner of Fifth and Monroe in those halycon (sic) days agone, and from the first became the gateway between the business man’s work and his home. It is a sort of junction point, between the diurnal toil of money-making men and the tranquil rest of the fireside. It is as natural for a wife to remind her husband to “leave it at Dodds’ by 2 o’clock,” as it is for the husband to buy his cigars at the same place …

Dodds’ is the connecting link between the East, West, North and South. With little variation the same people meet there twice a day, and probably scores of them conceal beneath a starched shirt front or within a throbbing bosom romances and secrets that would, if printed, bring fortune and fame to a dozen struggling novelists. There is no rest for the big front door. It is always on the move. … 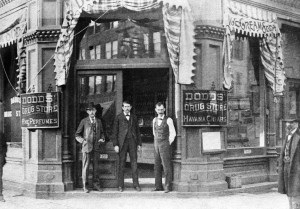 Richard Dodds grew up near Chatham and went to work for Springfield pharmacist H.H. Glidden in 1873. When Dodds died in 1921, he held the oldest active pharmacist registration in Illinois. He was secretary of the Illinois Pharmacists Association for 23 years and, according to his obituary, “was largely instrumental in securing the first enactment in Illinois of the law to regulate the sale of narcotics and habit forming drugs.”

“The striking characteristics (sic) of Mr. Dodds was his implicit faith in the honesty of mankind,” the obituary said.

Dodds’ store was open 24 hours a day. An Illinois State Journal article in 1909 said the store’s doors had been closed only twice in its 34 years (at that point) of existence — once at the 1907 death of Mayor David Griffiths and the other during Springfield’s 1908 race riot (Dodds’ was only a few doors south of Harry Loper’s restaurant, the riot’s ignition point).

Once fire all but devastated the place. The entire building except the drug store was gutted. Only the store on the corner remained standing and even there a few joists were damaged so badly that temporary braces had to be substituted.

This occurred January 17, 1888. For a time it seemed as if the entire building would go. And all was demolished except the drug store. …

Drugs were sold the entire time that the rest of the building was being reconstructed.

After Dodds’ death, his widow sold the store to another downtown pharmacist, J.E. Claypool, although Fifth and Monroe remained known as “Dodds’ Corner.”

That changed only after Benjamin Victor (1908-88) bought out Claypool in 1946. Victor had the Dodds building extensively remodeled — among other things, the decorative stonework and the cornice that bore the words “Dodds Drug Store” were removed — and converted the operation to a Thrifty drug store. (The building in 2016 still substantially reflected the 1946 redesign.)

The Journal recorded the change:

Without fanfare and probably with little or no notice at all, an era will die at midnight tonight – the era of Dodds’ corner, which dates back far beyond the memory of most living persons in Springfield and lingers only in the hearts and memories of those Springfieldians who are approaching the century mark of their existence.

For at midnight tonight, the Claypool store at the famous Dodds’ corner of Fifth and Monroe streets, will close for the last time …

More information: Benjamin Victor discussed his purchase of the Dodds building and the growth of the Thrifty drugstore chain in Illinois in an oral history interview conducted by Josephine Saner in 1978.