Christmas lights bedecked the Statehouse dome for the first time in 1924, but it took another four decades before the lights became a tradition. 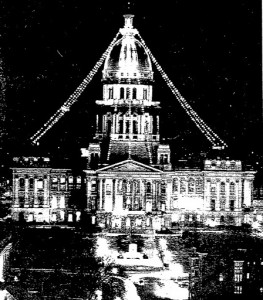 A.B. McCall (1887-1955), a mechanical drawing teacher at Springfield High School, had the idea to make the Illinois Capitol the centerpiece of a massive city/state holiday celebration in 1924. McCall’s plan was to decorate the dome with illuminated stars and Christmas trees, connected by strands of lights. Floodlights would further illuminate the entire scene, “with the lighted flag floating above.” The celebration was to culminate with a community carol sing directed by musical pageant impresario William Dodd Chenery.

The entire plan will be a combined municipal and state expression of the spirit of Christmas. It will give outward expression to all of Springfield of the wholehearted co-operation of Springfield, with its hallowed memories, and Illinois, one of the proudest states of the union, in spreading Christmas cheer. And it will be seen by everyone passing through Springfield on railroad or hard roads.

McCall’s vision wasn’t completely fulfilled – “a heavy encrustation of ice” kept workmen from installing all the lights, the Journal said, but “the effect which they did create was beautiful.” An estimated 3,000 people joined the festivities, led by Mayor Samuel Bullard as Santa.

The event, the Journal said, “caught the public fancy as the spirit of Christmas always will. It was a beautiful expression of the Yuletide sentiment, and bids fair to become an annual custom.”

The 1924 display, however, was not followed up. The dome was illuminated from time to time, such as during Illinois State Fairs and gubernatorial inaugurations. But the predominant motive for lighting the Statehouse dome during the first half of the 20th century was public safety.

The Springfield Police Department was the first agency to take advantage of the dome’s citywide visibility. In 1912, Police Chief John Underwood came up with the idea of installing red lights on the dome that could be flashed when officers were needed to respond to an emergency. The dome lights supplemented a red-light alert system already in use downtown.

Patrolmen on their beats are to watch the lights and when an emergency arises and the lights flash, they go to the nearest (police call) box and report to the station. Then they receive their orders.

(The lights weren’t Underwood’s only innovation. Also under his administration, police officers switched to an eight-hour workday instead of 12. Underwood pronounced the change a success. “The men feel much better when they only work eight hours, and I believe are able to do more actual good for the department than when they worked twelve hours,” he told the newspapers. “Now everyone feels like working all the time, and besides the men have a few hours to spend with their families.”)

The Statehouse dome lights remained the only way of calling officers until 1936, after a fundraising dance helped city officials purchase two-way police radios – and  five new squad cars to put them in. 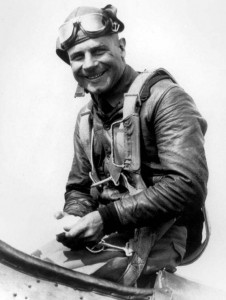 Meanwhile, in 1933, red neon lights were installed on all four sides of the dome as a warning to pilots. That derived from an incident in which famed pilot Jimmy Doolittle, flying to Springfield using the Chicago & Alton (now the Union Pacific/Amtrak line) railroad tracks as his guide, nearly hit the dome. Journal editor J. Emil Smith revealed Doolittle’s “miraculous escape” in a column published in 1936. Doolittle had flown to Springfield to meet two local friends, Lynn Searcy and James R. Graham, Smith wrote.

It was a murky night and Doolittle was following the Chicago & Alton tracks and flying low. He remembered what the depot here looked like and kept at a low altitude so as not to pass Springfield.

When he sighted the station he shot his plane upward and veered to the southwest. Before him the next instant loomed the dome of the state house. He was headed into it. There weren’t any moments to spare to keep from crashing into it. He resolved to make what is termed a ground loop. It was successful and saved him from what appeared to be certain death.

Searcy’s brother, state Sen. Earl Searcy, brought the near-tragedy to the attention of Secretary of State William J. Stratton (father of the later governor William G. Stratton), and Stratton had red lights installed on the dome as a guide for pilots. (Note: This paragraph has been corrected; see comments. Thanks to Robert Olson.) 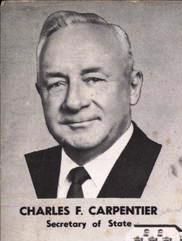 Christmas lights strung from the top of the Statehouse dome became part of Springfield’s holiday tradition only in 1962, when a half-dozen strands containing more than 1,000 multi-colored lights were draped from the tip of the dome to the roof corners of each wing of the building. Secretary of State Charles F. Carpentier, his superintendent of grounds and buildings James Walsh and several anonymous Statehouse electricians were given credit for initiating and carrying out the idea.