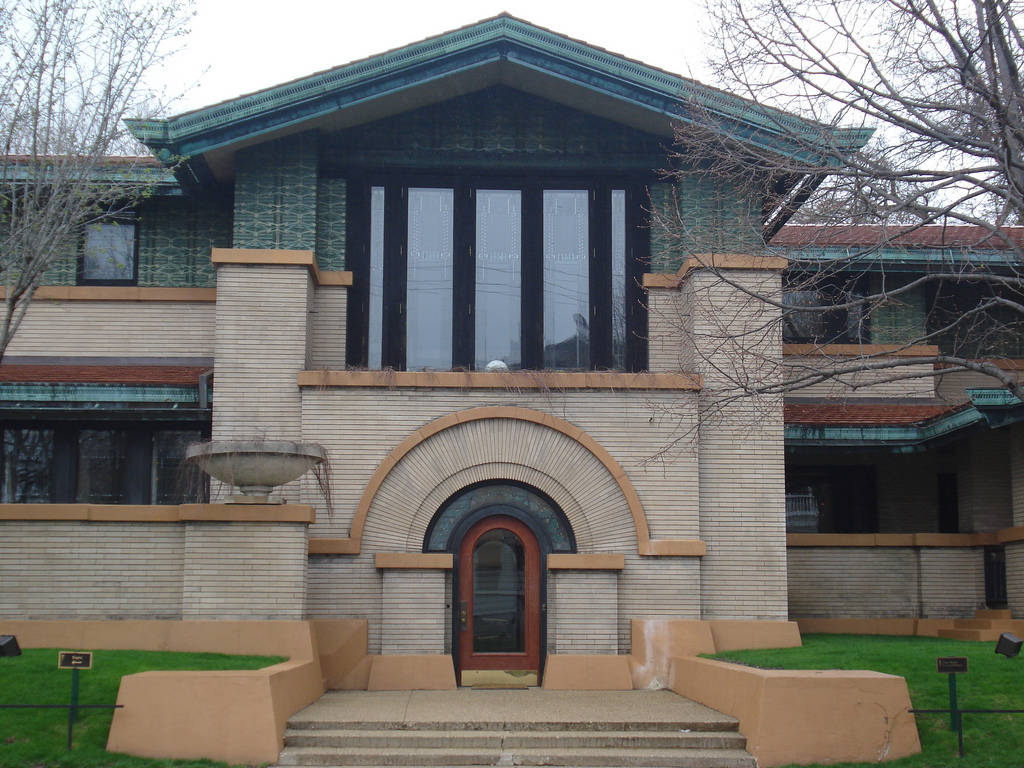 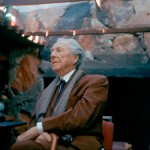 Dana gave Wright his first “open checkbook” commission, and the result, as described by the Springfield Historic Sites Commission,  “reflects the mutual affection of the patron and the architect for organic architecture, the relatively flat landscape of the State of Illinois, and the Japanese aesthetic as expressed in Japanese prints.”Among Wright’s Prairie Style houses, the Dana-Thomas House, which contains more than 100 pieces of original Wright furniture, 250 examples of art glass doors and windows, and more than 100 art glass light fixtures, is considered to have the most complete, best-preserved interior in the U.S.

The Dana-Thomas House’s 12,600 square feet of space takes in 35 rooms – including a one-lane bowling alley and a two-story ballroom whose floor is cushioned by springs  – and 16 major spaces. The home also includes terra-cotta sculpture by Richard W. Bock, and a fountain designed by Bock and Marion Mahony Griffin, Wright’s first employee and the world’s first licensed woman architect.

Susan Dana (1862-1946), was the daughter of Rheuna Lawrence, who began work in his teens as a bricklayer’s helper, became a building contractor and later  expanded into banking, livestock, railroads, mines (coal, silver and gold), and, especially, railroads. He also served as mayor of Springfield and president of the Springfield School Board. Rheuna Lawrence died in 1901, leaving his entire fortune to his only child, Susan.

The thrice-married Susan was an unconventional woman for her time, supporting women’s rights, equality for African Americans (Susan followed in the footsteps of her mother Mary Agnes in supporting Springfield’s Lincoln Colored Home), and an advocate of social services and the arts.

“(H)ad women been allowed a greater role in society during that period of time, it is certain that Susan Dana would have been a participant in the legislative process rather than a mere hostess,” Roberta Volkmann wrote for illinoishistory.gov (link no longer available). Dana lived in the house until the late 1920s, when she moved into a small cottage behind the home. She was hospitalized as incompetent in 1942 and died four years later.

Dana’s personal property was sold in a spectacular auction in 1943. The bulk of Wright’s distinctive furniture, however, remained with the house when Charles C. Thomas Publisher bought the house in 1944.  The publishing company specialized in medical books. (This paragraph has been updated. See comment below from Roberta Volkmann.)

The Thomas firm had its offices in the house until 1981, when the firm sold the home and furnishings to the state of Illinois for $1 million, well below what most experts think Thomas would have received if the building and contents had been sold piecemeal. The state then undertook a $5 million renovation of the home.

The Dana-Thomas House, now operated by the state of Illinois, is listed on the National Register of Historic Places and is a National Historic Landmark in addition to being a city and state historic site.  The building is open for public tours. The adjacent Sumac Shop offers related gifts and souvenirs. 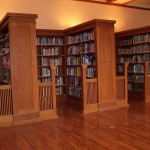 Visit: The Lawrence Memorial Library, dedicated to the memory of Rheuna Lawrence, was designed by Wright and incorporated into what is now the Springfield School District’s Lawrence Education Center at Second and Laurel streets. The public may visit by prearrangement.

Read: Susan Lawrence Dana: The Enigma in the Wright House by Dana-Thomas House volunteer Roberta Volkmann; available as a paperback or Kindle book on Amazon.com. Volkmann also wrote the illlinoishistory.gov article on the Dana-Thomas House. (Note that this entry has been edited to correct Ms. Volkmann’s first name in a reference above.  Our apologies.)