The center faced several obstacles at its creation: ignorance on the part of prospective clients, shoestring funding and the local dominance of St. John’s Hospital, which, as a Catholic institution, opposed all “unnatural” forms of birth control. Local doctors’ need to work at St. John’s (and to a lesser extent Springfield Hospital, the former name of Memorial Medical Center) meant no Springfield physician would help at the center’s clinic.

Herndon explained the problem in an interview done by Susan Sherard for the oral history program at what was then Sangamon State University. Funk also participated in the interview.

(I)t all got into politics really. I mean, their apprehension was about the political repercussions that might follow. Also the religion – I mean, St. John’s Hospital was the hospital, and they were told that they could not practice there if they gave assistance to us or to the people that Mrs. Zimmerman reported needed (it).

“Mrs. Zimmerman” was Myrtle Zimmerman (1892-1988), who was involved with the Family Welfare Association, a predecessor of the Family Service Center. Zimmerman initiated discussion of a possible birth control clinic when she talked to Lanphier about the “great need” for information among poor women, a need Herndon said was confirmed by local ministers. Zimmerman became a founding board member of the Maternal Health Center.

The head of the local visiting nurse association also was a Catholic who opposed birth control, Herndon said.

Nonetheless, the group rented two rooms over a drugstore in the 100 block of North Fifth Street, hired a physician (a woman associated with the Illinois Birth Control League who commuted from Chicago twice a month), and started the clinic, which was open from 10 a.m. to 2 p.m. every Monday.

Although the Illinois State Journal published a brief story on the clinic’s opening in November 1938, the founders of the Maternal Health Center relied at first on word of mouth – Mrs. Zimmerman and ministers told women they encountered about the existence of the clinic, supporters attended PTA and public aid meetings, and center volunteers staffed a booth at the Illinois State Fair. The group’s most effective tactic was to mail a notice to every new mother who had a birth notice published in local newspapers.

“So we did in our really amateur way spread out what we could,” Herndon said. “Response was rather remarkable.”

Most of the women who came to the clinic were in their late 20s or 30s, Herndon and Funk said. Each was interviewed by a volunteer, and an appointment was made for a physical examination.

Clinic clients had to be married – at least, that was the official stance.

“She had to have a husband,” Funk told Sherard.

“Absolutely,” Herndon agreed. “Of course, we couldn’t check up on whether she had or not.”

“It was for the record,” Funk said.

Getting women to return for the examination was a regular hurdle, Herndon said.

We used to go out and pick them up and bring them in because we’d set a date for them to come back and they wouldn’t show up. … Once they’d done it (come in for an interview), they thought that was it.

Except for the physician, virtually everyone involved with the clinic was a volunteer. In addition to interviews, Maternal Health Center supporters staffed the reception desk, cleaned the clinic – “O. (Octavia) Patton, when she came there, she washed millions and millions of gloves,” Funk said – and served as janitors.

Clients were charged only what they could afford to pay – which was seldom much, since the clinic was aimed at low-income women. The small group of volunteers also made donations, but for its first two years, “we were very shaky financial,” Herndon said. 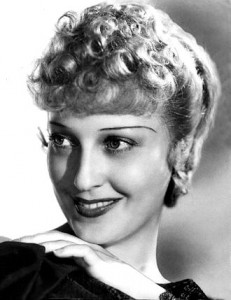 The center’s money problems, however, were wiped out in a single step when backers persuaded singer/actress Jeanette MacDonald (“Naughty Marietta,” “The Merry Widow”)  to appear at a benefit concert in 1940. But that, too, ran into obstacles when people who objected to birth control began a campaign to talk MacDonald out of performing in Springfield. Funk and Herndon described the controversy in the 1975 interview:

Funk: We had a friend who was a friend of the banker of Jeanette MacDonald, and that was when she was at the heighth of her popularity. She willingly signed a contract to come to appear (for) our Maternal Health Center. … We started promoting it. Talking about it.

The Catholics were very upset and wrote her threatening letters, and they would do everything to hinder her from coming. So (she) tried to break the contract. And we had a member, Louis Gillespie, wrote her. He is the lawyer. And so (MacDonald) put the date for Wednesday, Ash Wednesday, hoping that would discourage us and we would break the contract.

But we went on in the old Orpheum Theater, which was quite large. And it was packed.

But she was so apprehensive about  coming that her husband came with her. And she made it sound as if (the benefit) was a maternity thing. She sang a lullaby. And so without having to do with contraceptives in any way. I was president at the time, and I was pregnant. It was one of the most exhilarating, frustrating (events). …

(T)he Orpheum was filled. We were elated. … We were so excited. Here she was. And we had sold many tickets. And so we were financially secure up until the time (the center) was closed.

Sherard: That was the one thing that did it.

The center got a big boost in clientele after World War II – “the husbands were all coming home,” Herndon said, and some Catholic doctors were referring women to the clinic for information they could not provide – but patronage fell off in the 1950s.

By then, the clinic, which had renamed itself the Planned Parenthood Association of Springfield,  had a regular local physician, Dr. Ann Pearson. But many other doctors, especially younger ones, also had begun to provide contraceptives to patients who needed them. As a result, the organization eventually converted itself from a clinic to a referral service, directing women to private physicians who were willing to help.

The newborn letters continued, but with a new approach, Herndon said. The new text was approximately:

“Which was my telephone number,” Herndon said. “And I did get some calls. I got a lot of scolding calls.”

The national Planned Parenthood organization began to pressure the Springfield office in the 1960s to expand, add services and hire a professional executive director. “We decided that we could not do it, that it was just more than we could handle at that time,” Herndon said.

With more information generally available on birth control by then anyway, the local volunteers closed up shop in about 1964. In 1971, the remaining board members sent the $700 left in the group’s bank account to the national Planned Parenthood organization. 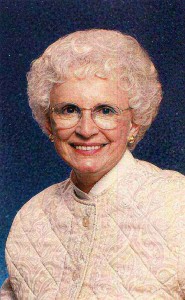 Even that caused a kerfuffle. Caryl Moy (1932-2010) had reorganized Planned Parenthood in Springfield a few months earlier. When Moy learned of the old organization’s national donation, Herndon said, Moy asked, “Can’t we get it back?” The answer was no.

“It was too bad after all the years of having it there,” Herndon said. “But it seemed the thing to do.”

Note: This entry has been edited to add photographs, provide information about Myrtle Zimmerman and clarify some details about the group that founded the Maternal Health Center.

This entry was posted in Prominent figures, Public health, Women. Bookmark the permalink.