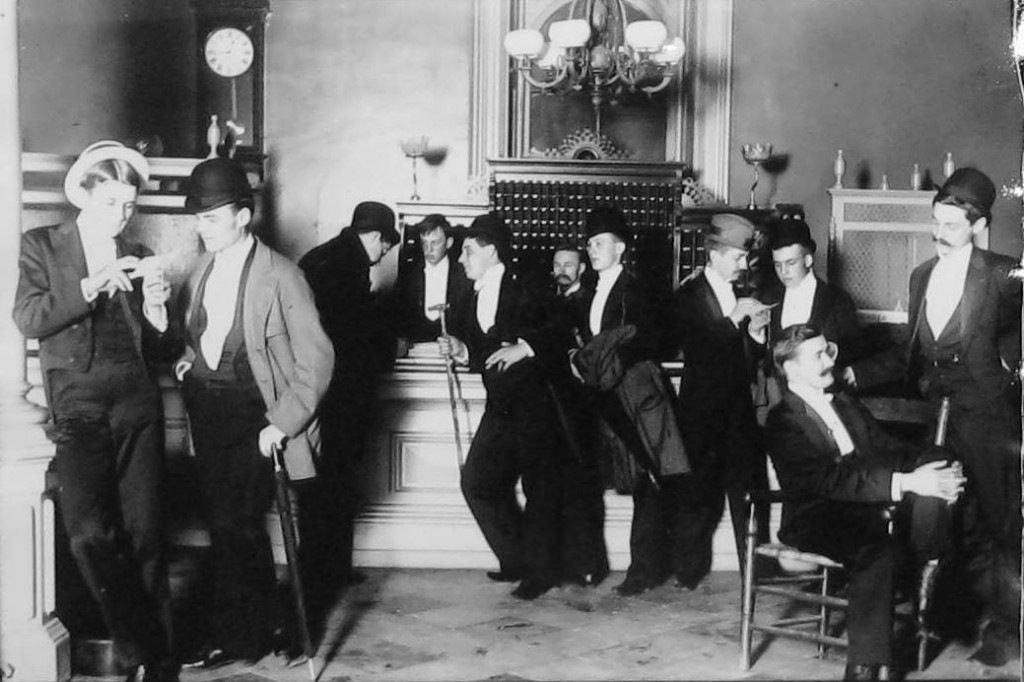 Young socialites in the Lobby of the Leland Hotel, 1889 (Sangamon Valley Collection)

This obviously staged photograph was taken by William Patton in the lobby of the Leland Hotel, Sixth Street and Capitol Avenue, in 1889. The photo was later printed in the lllinois State Journal. The caption said, in part:

Here in the lobby of the Old Leland hotel, destroyed by fire in 1889, young society people gathered for the famous old assembly balls and other social occasions. … Most were high school or college students.

Assembly balls were lavish dance/receptions sponsored by the Springfield Assembly, described by the Illinois State Register in November 1894 as “an organization composed of the young society men of the city.” The group put on several dances each year – there were five in 1894, all at the Leland, although locations changed in other seasons.

The Leland’s dining hall “together with its lovely decorations, its brilliant lights and beautiful costumes and faces presented a scene of gayety long to be remembered,” the Register said then.

Blood’s orchestra was present and furnished the music for dancing. A delightful luncheon was served in the tea room. The appointments here were as fine as in the dining room, which was decorated throughout with palms and chrysanthemums. There were about seventy-five couple (sic) present. …

The lobby shown – and virtually all of the old Leland – was destroyed by a fire on March 26, 1908. No one was hurt, and the hotel was rebuilt and modernized. Closed as a hotel in 1970, the Leland building now houses state offices.