Brockmeier was one of the most visible clergymen in central Illinois for three decades, starting while he was pastor of the former St. Barbara Parish in the 1930s. He began broadcasting on WCBS radio (later WCVS, now WFMB-AM) in 1936, “discoursing each Thursday night on religion, science, economics and similar subjects.” 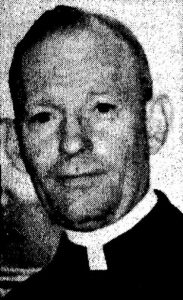 Brockmeier’s radio sermons – many of which were synopsized by local newspapers – tended to fire and brimstone when it came to communism, the teaching of religion in schools, and pornography. He also took a pox-on-all-sides stance during the prelude to World War II, as shown by a radio talk Brockmeier delivered in April 1939.

We will be asked to fight on the side of England and France and Russia. Neither England nor France are democracies in the American sense, and Russia is a totalitarian nation as bad if not worse than Italy and Germany. … We would lose even if we won; for in the next international war in which we become involved our own democracy will be destroyed and we shall live under a dictator, and a totalitarian form of government.

Brockmeier was not a pacifist, however. “The day might not be far distant when we will have to fight against the national socialism of a Hitler, or the international communism of a Stalin or the fascism of a Mussolini,” he had told his audience in August 1940. “In such an emergency there will be no room in this country for pacifists or fifth columnists.”

In any case, the subject – besides his Catholic faith – that dominated Brockmeier’s thinking was unionism.

Brockmeier, who had joined the typographers’ and pressmen’s unions while working as a reporter before entering the priesthood, viewed unions as a bulwark against socialism and labor radicalism. His efforts in Springfield included the institution in 1940 of night classes at St. Barbara’s for “laboring men of the city” in subjects such as economics, sociology and public speaking.

He later edited the Illinois Tradesman, the newspaper of the Springfield Trades & Labor Council, was a panel member of the American Arbitration Association and was involved in several local unionization efforts.

Brockmeier was transferred from St. Barbara’s in early 1941 to work in Quincy, where he took over editorship of the Western Catholic, the newspaper of the Springfield diocese. He remained editor until 1958.

Brockmeier returned to Springfield in 1944 and the next year was named pastor of Sacred Heart Church, 725 S. 12th St. In 1946, Brockmeier and seven of his parishioners founded the Sacred Heart Credit Union (now Heartland Credit Union), which Brockmeier said was an outgrowth of his belief in union labor.

“There is a tie-in between labor unions and credit unions,” he said. “Both tend to improve the standard of living for the working class.”

Brockmeier retired as pastor in 1970 and died in Springfield in 1976. He is buried in Kentucky.