Nicholas Ridgely, a Maryland native who moved to Sangamon County in 1835, was the father of 13 children by two wives (both named Jane). Here is a look at several Ridgelys who played prominent roles in 19th-century Springfield. 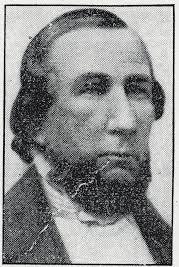 *Nicholas Ridgely (1800-88) came to Springfield after being appointed cashier of the State Bank of Illinois. In 1852, he organized Clark’s Exchange Bank, which was renamed N.H. Ridgely & Co. when son Charles became a partner in 1859. In 1864, William Ridgely, another son, joined the firm; two years later, the Ridgelys and two partners founded the Ridgely National Bank. Nicholas Ridgely served as bank president until his death.

The Ridgely bank (renamed Ridgely Farmers State Bank) remained in business until 1932, when it became the only Springfield bank to fail during the Great Depression.

Meanwhile, Ridgely backing helped finance the relocation of the state capital to Springfield in 1839, according to Past and Present of the City of Springfield and Sangamon County Illinois, by Joseph Wallace (1904). . “That note is preserved in the Ridgely family as a highly prized heirloom,” Wallace wrote.

Ridgely and partner Thomas Mather bought – for a song – the failed Northern Cross Railroad, Illinois’ first railroad, in 1848. Ridgely and Mather, along with eastern investors, rebuilt the road, which eventually became part of the long-lived Wabash Railroad.

Realizing that by the building of that road, with others, there would be an immense rise in the value of land in the state, he invested largely and became the owner of many thousands of acres, being one of the largest landowners in the state, and much of his wealth was obtained in that way.

Ridgely’s other business interests included the Springfield Gas Works, which provided gas for lighting — Ridgely was president of the firm — and the Cottage Garden, a nursery east of the built-up area of the city.

A man of business, he was yet fond of a day’s shooting or a quiet game of whist, and seemed to enjoy life to its highest degree. He was a man of elegant taste, fond of music and art, and familiar as few are with the poets. He was keenly alive to all the beauties of nature and loved his flowers as only a lover of nature can and made somewhat of a study of horticulture.

Charles Ridgely was a founder and president of the Springfield Iron Co., which originated as a manufacturer of railroad rails in 1883. As steel replaced iron in industrial uses, company profits slipped, and Ridgely and the other local stockholders sold the company in 1899. Springfield Iron closed permanently in the early 1900s.

Charles Ridgely also owned a 2,000-acre farm near Auburn, was a director of the Wabash Railroad and headed a number of coal field operations.

Ridgely was a founder of Springfield’s public library and president of the Springfield Art Club. He and a cousin financed the building of Christ Episcopal Church in downtown Springfield as a memorial to their mothers. 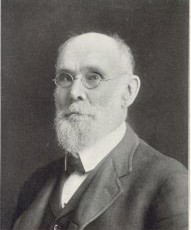 *Redick Ridgely (1830-1914) was an active Democratic politician who served terms as Springfield city treasurer and alderman, member of the  Sangamon County board of supervisors and Illinois General Assembly. He also was appointed Springfield postmaster by President Grover Cleveland.

Ridgely became supervisor of city street railroads in 1876 and was named city water works superintendent by Mayor Henry Devereaux in 1899.

*Henry Ridgely (1832-93), after several years as a banker, worked in management of the American House hotel and then partnered in a planing mill, Hopping & Ridgely, that was on Third Street between Monroe Street and Capitol Avenue.

A fire in August 1881 demolished the mill. The Illinois State Register’s account:

It seems that … the watchman at the planning mill started a fire in the furnace, and then proceeded to sweep out the office. Whilst thus engaged there was a “puff” in the furnace, caused by the fire becoming smothered with slack, and a quantity of burning coal was blown out and amongst some shavings. These of course burned like tinder, and the fire quickly communicated with the building, and baffled the efforts of the watchman to put it out with a Babcock extinguisher. Seeing his efforts fruitless he telephoned to the fire department and also to Mr. Ridgely at his residence, but for some reason the department did not get the necessary information as to the location of the fire, and the engines did not arrive on the scene and get to work until nearly a half hour after the call. By that time the fire had so far advanced that the building and its contents, together with those above mentioned, quickly succumbed to the action of the flames and were laid in ruins.

Ridgely was born in his family’s home, the second floor of a building on the east side of the Springfield square; the State Bank of Illinois occupied the first floor. He was one of the first students at Springfield’s Illinois State University.

After short-lived jobs in Chicago and St. Louis, he returned to Springfield to join N.H. Ridgely & Co., which became Ridgely National Bank in 1866. William Ridgely succeeded his father as bank president in 1888.

Mr. Ridgely was a bachelor, though a quiet modest man, who never sought to attract attention and was more inclined to listen than to express opinion. Mr. Ridgely has in his lifetime played a very important part in the development of this community. He asked liitle for himself, but devoted himself unflinchingly to every duty he assumed….

*Newspaper and magazine writer Octavia Roberts Corneau was the daughter of Octavia Ridgely Roberts, another of Nicholas Ridgely’s 13 children.

*Among the dozens of family members buried in the Ridgely plot at Oak Ridge Cemetery is Rebecca Woods, a black woman who was a servant of Nicholas Ridgely for many years. Findagrave.com indicates Woods was born in 1810 or 1812 in Maryland (also Nicholas Ridgely’s home state).

She died in December 1865, according to “Recalled to Life,” a 1932 history column written by the Illinois State Journal’s John E. Vaughn. Vaughan quoted Woods’ obituary:

Her familiar face was known to all our citizens and her genuine goodness of heart made her a general favorite. Her Sunday afternoon visits among the neighbors were regularly made for many years, and her coming was always hailed with pleasure by old and young alike.

Woods’ body, along with those of other Ridgelys, was moved from Springfield’s old Hutchinson Cemetery (now the site of Springfield High School) in 1874.