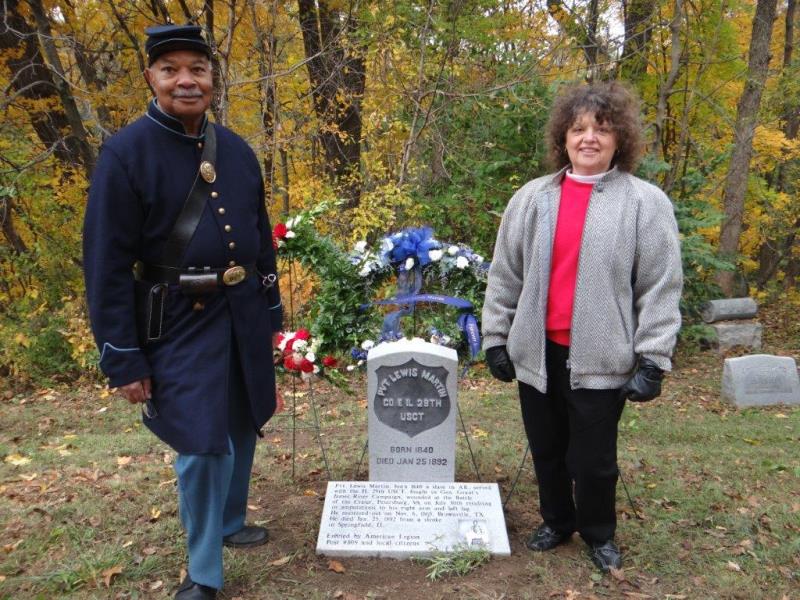 This entry has been updated — ed.

Lewis Martin (1840-92) was a free Black man who served in the 29th regiment U.S. Colored Troops during the Civil War. He was severely wounded in the Battle of the Crater before Petersburg, Va., on July 30, 1864, and his right arm and left leg had to be amputated.

A photo of Martin taken to document his pension application is an iconic image of the horrendous injuries the war inflicted on many combatants, on both sides and of both races.

Martin (whose first name is sometimes spelled “Louis”) died in Springfield in 1892.

The Battle of the Crater was a debacle for the Union, and especially for African-American soldiers. Union engineers had dug a tunnel below Confederate fortifications outside Petersburg, which was a key objective in the Union thrust toward Richmond, Va., the Confederate capital. The tunnel then was packed with explosives and blown up.

Once the giant mine exploded, the plan was for Union troops to flood through the opening and overwhelm Petersburg’s defenders. USCT units, including the 29th, had been scheduled to lead the attack and had trained for the assignment. At the last minute, however, Gens. George Meade and Ambrose Burnside ordered white soldiers t 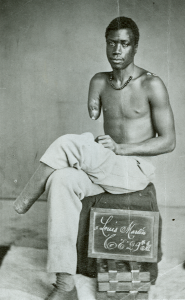 o assault the breach first. The result was that the crater became a death trap for the attackers, not the defenders.

The USCT regiments went into the crater at the end of the assault instead of the beginning. Despite gaining more ground than its white counterparts had, the USCT also was turned back, and Confederates massacred surrendering or wounded Black soldiers. Martin, however, did not fall into Confederate hands, and his wounds were treated at hospitals in northern Virginia and, later, Washington, D.C.

Martin, who had relatives in Alton, lived in Springfield late in life and was well known. He was a member of John A. Bross Post (the local African-American unit) of the Grand Army of the Republic, and the Illinois State Journal took note when Martin collapsed during funeral services for Capt. John G. Mack, the GAR’s state mustering officer, in October 1887:

Louis Martin, the brave fragment of a veteran of Bross post, fainted yesterday afternoon at the cemetery while in attendance upon the funeral of Capt. Mack. The walk was too much for him. He is minus a leg and an arm and has several marks of affection received from the boys who pointed their muskets north.

Martin lived on a pension of $72 a month, according to newspaper accounts of his death. In 1889, he received $6,500 in back pension payments, part of which he used to buy property along West Jefferson Street, including the house at Lincoln and Jefferson where a caregiver found his dead body on Jan. 26, 1892.

His tombstone lists the cause of Martin’s death as stroke. Newspaper articles when he died, however, said Martin probably died of exposure and the effects of alcoholism. “(H)e drank very hard,” the Illinois State Register reported. An inquest reached the same conclusion.

Martin was buried in an unmarked grave in the pauper’s section of Oak Ridge Cemetery. Local researcher Kathy Heyworth identified Martin as the subject of the photo above and located his grave in 2012. (See Dave Bakke’s May 16, 2012, column in The State Journal-Register for more about Martin and the effort to recognize his grave.)

Note on Bross Post, GAR: Springfield had three Grand Army of the Republic posts in the late 1800s — Stephenson Post and Mendell Post, both composed of white Union veterans of the Civil War, and Bross Post for African-American veterans.

Bross Post, named after Col. John A. Bross, the white commander of the 29th USCT, who was killed in the Battle of the Crater, was founded in 1886. The post had 17 charter members, although it enrolled 10 more the next year. The first commander was Henry Vantrece.

Bross Post disbanded in 1913, according to researcher Kathy Heyworth, although a women’s auxiliary unit apparently continued to operate. The John A. Bross Post Women’s Relief Corps held a tag day in Springfield in August 1942 to benefit Black World War II soldiers and their families. Mrs. Emma Gibbs was president and Mrs. Frankie Washington was secretary of the relief corps at that point.

More information: Much more detail about the life of Lewis Martin and other local African-American Civil War veterans is available in Kathy Heyworth’s well-researched book, Private Lewis Martin and African-American Civil War Soldiers in Springfield, Illinois (2015). It is available at Prairie Archives, south side of the Old Capitol Plaza, for $10 per copy or directly from Heyworth at $12 per copy, postpaid. Contact kathyheyworth@gmail.com.

This entry was posted in African Americans, Military. Bookmark the permalink.