Excerpted from the introduction to “Leftist Lithuanians,” an entry  on the blog Lithuanians in Springfield, lllinois, written by Sandy Baksys:

From the beginning of 1930s through the late 1950s, Springfield seems to have been home to the “Lithuanian Lodge,” the local chapter of a leftist fraternal benefit society known as the Association of Lithuanian Workers. In October 1949, the Illinois State Journal ran an announcement of a lodge picnic at the Pakutinskas (Pakutinsky or Pakey) farm on Mechanicsburg Road about seven miles east of the city. 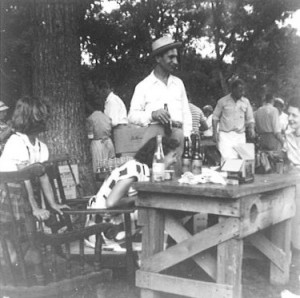 Wikipedia says the ALW was established in June 1930 as a communist-leaning splinter of the Lithuanian Alliance of America.

According to some sources, Lithuanians frequently constituted the largest foreign language group on the early American left. And, although illiteracy was the rule among first-wave Lithuanians, it seems that many of those who were educated gravitated to socialist organizing and publishing.

According to Wikipedia, the Amerikos Lietuvių Socialistų Sąjunga (American Lithuanian Socialist Union), was established in 1904 by Lithuanian immigrants, though it did not affiliate with the Socialist Party of America until 1915. The independent Laisvė (Freedom) newspaper, which affiliated with the ALSS, was “one of the most influential and longest-running radical Lithuanian-language newspapers in the United States, issued daily from 1919 through 1958.”

When the Socialist Party of America split in 1919, its communist-leaning Lithuanian Socialist Federation branch moved en masse into the newly formed Communist Party of America, and Laisvė became an organ of the CPA. (The “lodge” or ALW had its own national publication, Tiesa (Truth).

A local man who wrote for Laisvė during the 1930s under the pen name “Urbana Farmer” was Joseph Pakutinskas (Pakutinsky), who owned the aforementioned 80-acre farm on Mechanicsburg Road with his son, Frank Pakey. Joseph and his wife Anna Janusauskis were born in Lithuania in the 1880s and immigrated to the U.S. around 1907.

Read the rest of Sandy Baksys’ analysis of socialist/communist sentiment among Lithuanian-Americans – and the political conflicts it caused within the Lithuanian community — at Lithuanians in Springfield, Illinois. Copyright Sandy Baksys.