The “potato matinee” of Christmas 1925 was the brainchild of longtime local theater manager Harry Thornton. It quickly went awry, the victim of its own success.

In 1925, the Chamber of Commerce’s Good Fellows committee was putting together a campaign to fill Christmas baskets for the poor. Thornton, who at the time managed the Gaiety, Princess and Vaudette theaters, told the Good Fellows he had an idea.

“We’ll give a matinee for kids at the Gaiety, and the price of admission will be one potato,” he said. “That should produce a lot of potatoes for your Christmas baskets.”

Smith described the results of the plan.

The afternoon of the matinee an army of children flocked to the Gaiety. The seating capacity of the Gaiety was 800, but it wasn’t nearly enough to take care of the children who came.

Thornton then threw open the doors of the Princess theatre which accommodated 1,000 persons. Still all the children were unable to get in so the Vaudette theatre was opened to care for the overflow crowd.

“It kept us busy running from one theatre to the other with the films of Fatty Arbuckle, Charlie Chaplin and Buster Keaton,” said Thornton. “As fast as one of them was run off at the Gaiety we hurried with it to one of the other theatres. The potato matinee was one of the most successful things ever pulled off in Springfield.”

The next day, however, Thornton got an earful from local grocers.

They pleaded with me never to hold another potato matinee. One of them, complaining bitterly, told me he had three barrels of potatoes in front of his store and when he went to fill an order for a customer he found the kids had stolen nearly all of them to go to the potato matinee.

The Illinois State Journal’s coverage of the potato matinee on Dec. 20, 1925 differed from Thornton’s in some details – the movies, the newspaper reported, were Chaplin’s The Vagabond, The Village Sleuth starring Charles Ray , and One Wild Ride, an “Our Gang” comedy, and the matinee originally was scheduled for the Princess theater, not the Gaiety. But the article otherwise confirmed Thornton’s memory 17 years later of the potato pandemonium.

A total of 3,000 kids flocked to the three theaters – another 200 had to be turned away for lack of space – and the total take was 30 bushels of potatoes.

“The problem of supplying potatoes … had been an acute one,” the Journal reported, “because of the expense of the potatoes. The potato matinee solved this problem.”

Thornton (1872-1944) had a colorful career beyond potato marketing gimmicks. The son of a newspaper advertising executive in Topeka, Kan., he became a vaudeville performer at age 17. His Illinois State Journal obituary, reproduced on findagrave.com, suggests he was a successful performer:

From 1900 to 1914 he traveled, singing popular songs on vaudeville programs. He was abroad two years, playing on the opening night of the Coliseum opposite the Duke of York theatre in London. Then followed appearances across Europe and South Africa, thence back to America where he often boasted he had appeared in every city of more than 50,000.

In 1903 he was married to Grace Cummings at Winnipeg, Manitoba, and the team of Thornton and Cummings* was formed. Later, they took on Frank Patricola and the three toured the Orpheum, Keith and Interstate circuits, as he used to say, “with jugglers, acrobats, troups (sic) of trained cockatoos, leopards and lions.” 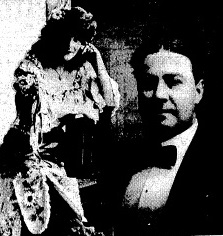 Thornton came to Springfield at the behest of his wife’s stepfather, theater owner Bill Watts. Both men lost heavily when the stock market crashed in 1929, according to the findagrave biography, and Thornton retired from the theater business in 1930.

His obituary – perhaps written by Smith – described Thornton as a “man about town, veteran of the vaudeville and dramatic stage, pioneer in the exhibition of motion pictures in this city, 30 years a resident of Springfield, a man of many ups and downs but always happy, cheerful and friendly….”

*Ed. note: The actual name of the duo seems to have been the reverse: Cummings and Thornton.

— The Gaiety opened on Sept. 26, 1904, in the 300 block of South Sixth Street (among its first-day vaudeville acts were “Barney First, eccentric Hebrew comedian” and “Florence Moore, celebrated whistler”), but moved in 1907 to the 500 block of East Monroe Street.

The Gaiety was purchased by the Kerasotes family in 1929 and renamed the Senate. As the Senate, it hosted Springfield’s first-ever “talkie” – Syncopation, starring Fred Waring’s Pennsylvanians, Morton Downey and former Springfieldian Bobby Watson – on May 11, 1929.

The Senate operated until 1983, when most of the north side of the block was demolished to make way for the Lincoln Square apartment complex.

— The Princess opened at Fifth Street and Capitol Avenue with the movie Samson on May 30, 1914. Developers promised “remarkably lifelike” pictures from any of the 500 seats. The Princess was renamed the Lincoln after the Frisina theater chain leased it from Watts in 1928. The Lincoln closed in 1976.

Note: Cinematreasures.org, a website that compiles the history of old theaters, has entries on the Gaiety, Vaudette and Princess, but contains serious errors about all three. Opening dates are incorrect for the Gaiety and Princess, and Cinematreasures appears to have confused the Vaudette with Springfield’s Lyric theater, which operated in the same hundred block on South Sixth Street. Cinematreasures information should not be relied on.

Hat tip: Thanks to Bob Thornton Morrison for guiding us to Harry Thornton and the potato matinee.