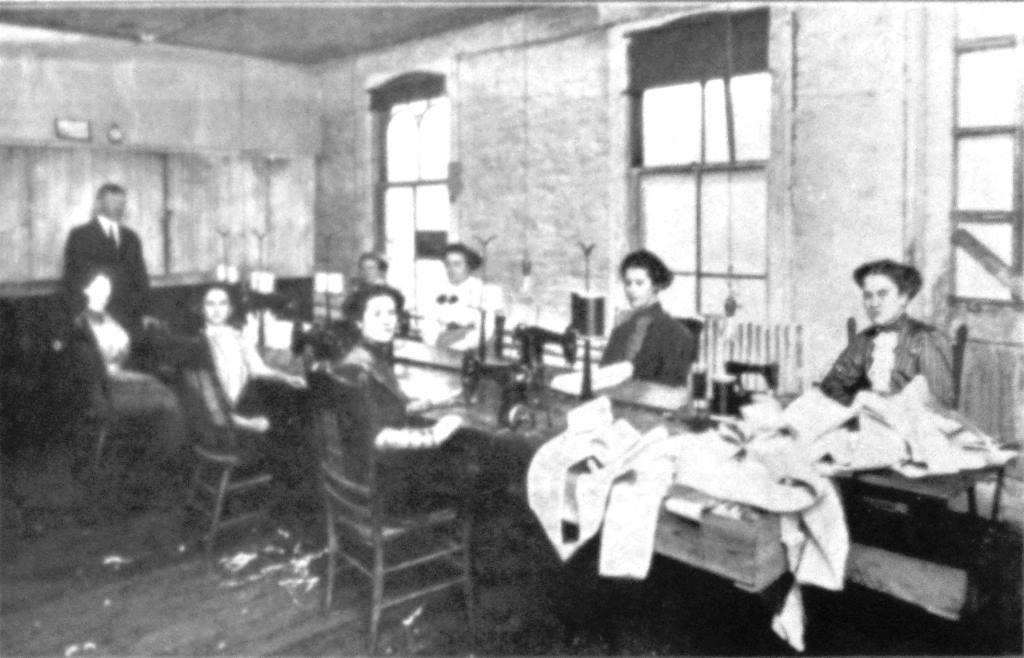 Springfield Glove Co. sewing room, 1912 (Springfield: The Capital of the State of Illinois)

The Springfield Glove Co. employed about 15 people, most of them women, when this photo was taken for publication in Springfield: The Capital of the State of Illinois, published by the Springfield Commercial Association in 1912.

Springfield Glove opened for business in July 1909 at 319 S. Third St., making “gloves adapted to the uses of engineers, firemen, motormen, farmers and for general work … a special feature in their manufacture being a most desirable canton flannel mitten for the use of farmers in corn shucking.” The company also made aprons for butchers and bartenders.

Springfield Glove grew steadily to a workforce of 75 and eventually relocated to 2151 S. Ninth St.

A.C. Barrow & Co. of Lynchburg, Va., bought out Springfield Glove in late 1924 and converted the Ninth Street plant to production of overalls under the name Barrow-Smith (John D. Smith was the manager). Based on Springfield city directory listings, Barrow-Smith apparently remained in business locally only until about 1927.

The Indiana-based Culver Manufacturing Co. announced plans in 1925 to resume glove-making in Springfield, operating in part of the Paris Cleaners plant at Yale Boulevard and Ash Street. No evidence suggests that Culver ever went into operation locally, however. There were no newspaper stories about the firm after its preliminary announcements, and it didn’t last long enough to make it into Springfield city directories.

Instead, Culver’s facilities at Paris Cleaners appear to have been taken over by a general clothing manufacturer, Chicago-based Rothschild-Spiesberger, but the city directories suggest that firm remained in Springfield only until about 1930. (Renamed Prosterman-Spiesberger, the company had a Jacksonville plant, which made suits for, among others, Springfield’s Myers Brothers Department Store, until it too closed in 1938.)

This entry was posted in Business, Women. Bookmark the permalink.