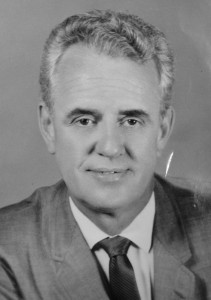 During his administrations, Springfield was named an All American city, city boundaries were greatly expanded, and the city initiated construction of a new Municipal Building. Springfield also took its first steps toward city planning and urban development under Howarth. He created the first city historic sites commission, and in his last week in office, Howarth testified before Congress as part of the ultimately successful effort to create the Lincoln Home National Historic Site.

Howarth, however, is probably best remembered for his civil rights efforts – as mayor, he integrated the Municipal Band and desegregated Oak Ridge Cemetery, expanded the number of African-Americans on the Springfield Police Department, ordered taverns and restaurants to admit blacks and established a city human rights commission.

Born in Indiana, Howarth grew up in the suburbs of Chicago. He earned his law degree from the University of Illinois and came to Springfield in 1934 to work in real estate title research for the Prudential insurance company. After U.S. Navy service during World War II – Howarth, a lieutenant, earned six battle stars as fighter director on the U.S. Lexington – he returned to Springfield.

On his first night back from the war, Howarth “went out on the town” with two friends, he told State Journal-Register reporter Mary Nolan for an article published on Oct. 2, 1988.

In short order, Howarth became involved in the Good Government League, a reform group whose leaders included a number of young war veterans like Howarth, and became president of the Springfield Junior Chamber of Commerce.

“We couldn’t trust the police,” he said. “They would tip off tavern owners and the operators of houses of ill fame.”

After 16 months with Coutrakon’s office, Howarth went back into private practice of law, but other members of the Jaycees convinced Howarth to run for Springfield mayor in 1951. He lost that race to John MacWherter, but Howarth ran again in 1955 and easily defeated Dwight O’Keefe. Howarth ultimately would go three-for-six in mayoral races, winning in 1955, 1963 and 1967, but losing in 1951, 1959 (to Lester Collins) and 1975 (to William Telford).

Howarth’s collected papers are held in the archives of Brookens Library at the University of Illinois Springfield (they are not online). Howarth also was interviewed twice, in 1973 and 1987, for the UIS Oral History Collection; however, the interviews initially were restricted, and neither appears to be available online.

As mayor he was a champion of civil rights and impartial law enforcement. In his first term he promptly began to desegregate the police department, the fire department, and the municipal band and choir. He informed Springfield restaurant owners who refused to serve blacks that they were in danger of losing their liquor licenses.

Howarth urged the annexation of the burgeoning subdivisions surrounding Springfield, adding 10,000 acres to the city during his three terms. Under his leadership, the city expanded Capital Airport, built the Prairie Capital Convention Center, and added Riverside Park and Lincoln Greens Golf Course to the park system. He also played a major role in the development of the Old Capitol Plaza, the establishment of Sangamon State University, and the creation of the Lincoln Home National Historic Site.

The late Dr. Edwin Lee, a prominent member of Springfield’s black community, is quoted in Howarth’s obituary in the State Journal-Register (October 17, 1991): “Civil rights made the greatest strides in Springfield since Lincoln’s time under his regime. What he did was unheard of. It lifted the hearts and souls of many people in the so-called minority community.”

Mayor Ossie Langfelder is quoted: “He was, in my estimation, probably the most outstanding mayor Springfield ever had.”

Many of Howarth’s initiatives were controversial – Howarth told Nolan in 1988, for instance, that his civil rights efforts were the reason he lost to Collins in 1959. (However, Illinois State Journal political columnist Ken Watson wrote prior to the 1963 election that Howarth’s fiery temper was his “unquestioned handicap” in 1959. “He appears to have licked this problem,” Watson added.)

Howarth took pride in his administration’s efforts to improve conditions for black residents, and he believed those efforts helped prevent violence in Springfield following the assassination in 1968 of Rev. Martin Luther King Jr.

“I have every hope that we will continue to have racial harmony in Springfield, even though the discord is all around us,” Howarth said in a statement following King’s death, “but we also must produce. We can expect the advice of reasonable people to be followed only as long as it produces reasonable progress.”

Nelson and his wife Mary are buried at Homewood Memorial Gardens, Homewood, Ill.