Postponed maintenance, repair crises and general dilapidation have been recurring problems at the Illinois Executive Mansion – most recently in 2014 and 2015, when a leaky roof and mold in the basement helped create a need for more than $5 million worth of repairs. 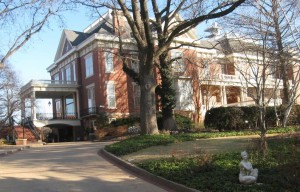 But the mansion, which was completed in 1855, probably faced its biggest crisis in 1963, when the Illinois House of Representatives voted to tear down the home, sell the downtown block it sits on, and construct a new mansion somewhere in “a residential neighborhood” of Springfield.

One of the major reasons for the demolition push was a devastating fire that took place at the New York state governor’s mansion in 1961. The blaze drove Gov. Nelson Rockefeller and his wife out of the home in their nightclothes and led Illinoisans to re-examine their Executive Mansion.

Chicago newspapers were especially scornful of the home, then occupied by Gov. Otto Kerner and his family. Chicago Sun-Times columnist Irv Kupcinet wrote that the mansion “is a hazard, as well as horror,” to the Kerners, according to At Home With Illinois Governors, written by Dan Monroe and Lura Lynn Ryan (wife of former Gov. George Ryan) and published in 2002.

At Home also reprints part of a story written by the Chicago Daily News’ Chuck Nicodemus:

(I)ts bricks are crumbling and the mortar is turning to dust.

In the attic, floorboards are rotting and crack under your heel. Ceiling beams are tinder-dry. Wiring is exposed.

In the basement, ancient lead pipes are so porous they leak without cracking – then suddenly collapse.

Heavy chunks of slate from the aging roof clatter to the ground, three stories below, endangering passersby.

“It’s a firetrap,” confides a fireman. “I wouldn’t sleep there one night.”

Kerner himself expressed concern about his family’s safety in the mansion, and in the 1963 legislative session, House Republican leader William Murphy of Antioch sponsored a $700,000 appropriation to build a new mansion. The site of the 1855 mansion, a square block between Fourth, Fifth, Jackson and Edwards streets in Springfield, would be valuable business property, he argued, and could be sold for $750,000 or more, more than enough to build a new mansion.

Springfield’s legislators were split on the idea. Rep. G. William Horsley, a Republican, led the opposition, but fellow Republican Rep. George Coutrakon and Democrat Allen Lucas both voted for Murphy’s bill when it came up for final House passage on June 19, 1963.

The division probably reflected initial public opinion. The Democratic-aligned Illinois State Register, perhaps reflecting Kerner’s never-quite-spelled-out preference, supported demolition. The Journal, the Republican paper, was noncommittal in 1963; the next year, however, the Journal also called for the mansion to be torn down, although that paper favored doing so on the existing site. Mayor Nelson Howarth also said he had “no feeling” about demolition of the mansion, although he added that, if it was replaced, the new mansion should be built near the Statehouse.

However, local preservationists, led by Dr. Floyd Barringer and the Sangamon County Historical Society, mobilized to support the mansion, and Murphy’s bill died in a Senate committee less than a week after its House passage.

Unfortunately, that didn’t solve the problem of what to do about the decaying mansion. In fact, little was done for the rest of the decade. A study completed in 1967 recommended a total rehabilitation and additions of one-story wings on the east, west and south sides of the mansion, but the proposal languished after Kerner was named a federal appellate judge.

Finally, Gov. Richard Ogilvie (1969-73) approved a $3 million project to add a two-story extension on the south side of the mansion and virtually rebuild the historic mansion itself. The Ogilvie family lived in the  Lincoln Towers, across Second Street from the Statehouse, between December 1970 and May 1972 while the work was under way.

“Painstaking and scientific, cooperating with consulting engineers, they searched state and private records for every scrap of information pertaining to the original Mansion and the changes that had been made as a result of some fifty appropriations by the General Assembly,” wrote Robert P. Howard in The Illinois Executive Mansion: A Guide and History (incomplete, unpublished manuscript, transcribed 2011).

Howard went on, however, to make a prediction that, based upon recent mansion maladies, has not totally stood the test of time: “Historic and sturdy, expanded and versatile,” he wrote, “(the mansion) should serve Illinois for coming centuries.”

More information: At Home With Illinois Governors is an excellent source on the history of the Executive Mansion through 2002 and provided the basis for much of this entry.

Howard’s Guide and History gives even more detail on many of the changes that have affected the structure of the mansion over the past 160 years. The Guide and History apparently was begun for the Sangamon County Historical Society, but was never completed. The transcription can be read at Lincoln Library’s Sangamon Valley Collection.

Lowell Anderson and James T. Hickey briefly described the 1970-72 mansion rehabilitation in an interview done for the then-Sangamon State University Oral History Project in 1971. Anderson alone discussed the project in more detail in another oral history interview in 1984.

Records of mansion restoration from 1956 to 1982 are available through the Chronicling Illinois web resource maintained by the Abraham Lincoln Presidential Library.