Sangamon County Sheriff Samuel T. Metcalf (1867-1945) was ousted from office in 1933 on the grounds of insanity, a condition apparently brought on by a head injury Metcalf suffered in a fistfight with an Illinois State Journal police reporter. 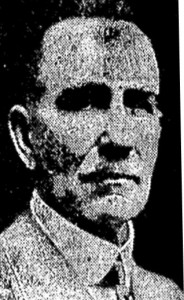 The fight took place in the early morning hours of Aug. 31, 1932, outside the Journal’s offices in the 300 block of South Sixth Street in Springfield.  Reporter William “Smokey” Downey said Metcalf attacked him; when he punched back, Downey said, Metcalf fell and struck his head on the sidewalk. Metcalf suffered a fractured skull and severe concussion and was unconscious for days after the incident.

The Journal gave the fullest report of the fight in an article – based largely on Downey’s account, since Metcalf was unable to be interviewed – published Sept. 1. The newspaper said:

Ill feeling had existed between Sheriff Metcalf and the newspaper reporter for some time. As police reporter, Downey’s work brought him in close contact with the sheriff’s office. They had often differed in the handling of news.

The evening of Aug. 30, Metcalf called the newspaper several times and then came to the newsroom twice trying to contact Downey, the story said. The second time,

(I)t was explained to the sheriff that a police reporter’s duties require that he spend most of his time away from his office and that he probably would be able to find Downey at the police station.

The sheriff again left The State Journal presumably for his office in the county jail.

Downey declared that following an exchange of words, the sheriff struck him in the face with his fist. Attempting to avoid further blows, Downey ducked, he said, but failed to escape a rain of slaps to his face. At this moment, Downey said the sheriff pushed him against an automobile parked at the curb. Hemmed in by the automobile, Downey declared, he warned the sheriff.

Up to this time, Downey said, he struck no blows but when the sheriff continued his attack, Downey explained he struck out with his right and catching Sheriff Metcalf in the face. The force of the blow, Downey said, caused the sheriff to fall over backward on the sidewalk.

A passing police squad car was hailed and police together with Deputy Sheriff Wiley Means took the sheriff to his home in the county jail and later he was taken to St. John’s hospital. The sheriff has been unconscious since the fist fight.

Metcalf regained consciousness only gradually, although by Sept. 9, the Journal said, doctors were reporting Metcalf “opens his eyes, recognizes persons and objects and attempts to talk.” He finally left the hospital on Oct. 18.

Metcalf, a Buffalo-area resident, was a former superintendent of the Sangamon County Poor Farm and had been elected sheriff in 1930.

He resumed his sheriff’s duties in May 1933, but his return was rocky. The company that had sold Metcalf the performance bond he was required to maintain canceled its guarantee in July, and Metcalf had to round up four supporters to provide a personal bond instead.

His behavior also became erratic, according to a skimpy public description of Metcalf’s actions that was presented to the county board in support of his ouster. In what the Journal said was a surprising step, the board of supervisors heard testimony and voted unanimously on Sept. 12, 1933, to dismiss Metcalf as sheriff and appoint Pleasant Plains newspaper publisher Allen Cole as Metcalf’s replacement.

Deputy Sheriff L.E. Barnett said he had been assigned to guard Metcalf from time to time and that he “always made it a point to see that the sheriff did not come into possession of weapons for fear that he might do violence to members of his family or force.” The sheriff’s wife, Hattie, had spent about 10 days at Barnett’s home, he said, “presumably as a precautionary move.”

“At times, Barnett said, Metcalf appeared to act as a reasonable person and at other times, he acted abnormally,” the Journal said in its Sept. 13 story on the sheriff’s dismissal.

The two city police detectives testified that Metcalf had tried to arrest them “for no reason at all” a week earlier. They went along with Metcalf into the county jail, but broke away when Metcalf attempted to put them into a cell, they said. Metcalf later called the police station to say he was coming after the detectives. Police Chief Carl Nuess reportedly told officers to lock up Metcalf if he appeared, but he did not.

A Jacksonville physician submitted a statement to the board about Metcalf’s mental condition, the newspaper reported, and a special six-member committee of the county board heard from “a group of Springfield physicians” behind closed doors before the ouster vote. 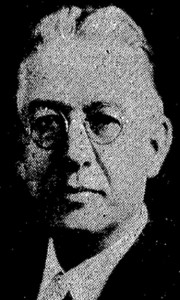 Cole (1874-1934), a native of Maine, had worked as a newspaperman in New York, Washington, D.C., and St. Louis before buying the Pleasant Plains Argus. He later founded the New Berlin Bee.

Cole said he hadn’t sought the sheriff’s appointment, but Democratic leaders approached him about taking the job when it became clear Metcalf could not continue as sheriff. Becoming sheriff apparently whetted Cole’s taste for politics, however, as he then sought and won a Democratic nomination for state representative in the 1934 primary election.

But on Oct. 18, 1934, Cole and his wife Molly were killed in a car accident while on their way to Jacksonville for a political rally. Cole, who was driving, tried to stop suddenly when he came upon a road barrier east of Jacksonville, but his car skidded on the wet highway and was hit broadside by an oncoming vehicle. Molly Cole died instantly. Her husband lived only a few hours longer.

Cole was succeeded as sheriff by his chief deputy, William Natterman. Natterman occupied the office for only a month, until another Democrat, auctioneer Luke Gaule, won the November election as sheriff.

Downey (1909-91), the reporter whose punch left Metcalf incapacitated, went on to become a top aide to Gov. William G. Stratton. Downey was interviewed by Marilyn Immel in 1982 for what is now the University of Illinois Springfield’s oral history program. The interview, however, contains no mention of the Metcalf incident.