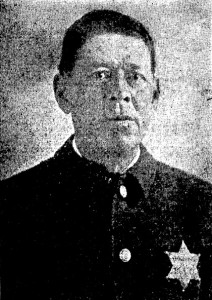 Police Officer Noah Roll was attempting to protect two streetcars from a mob at Ninth Street and North Grand Avenue about 9:15 p.m. Aug. 7, 1917, when he was struck in the head by two shots fired by someone on one of the streetcars. He died early the next morning.

The Springfield Consolidated Railway Company and unionized employees were in the third week of a violence-marred strike against the company when the slaying occurred. Union sympathizers, who were boycotting the company, had sporadically overturned or stoned cars since the strike began. Non-striking employees were threatened and some beaten, and one motorman was shot and slightly injured the evening the strike began.

The streetcars normally operated until 10 or 11 p.m., but Sangamon County Sheriff John Wheeler — saying he was unable to protect the cars at night — had ordered the company 10 days earlier to shut down at 6:30 p.m. daily. The company complied at first, but general manager A.D. Mackie notified authorities during the day Aug. 7 that the cars would resume night-time service.

“This Company asks no more than to be protected in the exercise of its constitutional rights to peacefully pursue its business and requests assurance from you for your co-operation and such protection,” Mackie wrote Mayor Charles Baumann.

Mackie asked that each car carry two police officers armed with riot guns for protection. Instead, Wheeler rounded up a “large number” of special deputies, and county and city officers began planning to deal with disturbances.

“Seventeen automobiles were in use by the officers,” the Illinois State Register reported. “Beside almost every street car an auto loaded with armed officers was driven to the end of the line to prevent any trouble.” Wheeler’s special deputies apparently rode on many of the cars as well — including on the Ninth Street line.

At Ninth and North Grand, Roll was working with other officers and deputies to disperse a crowd confronting two southbound streetcars when “(t)wo bullets fired from a passing street car resulted in his death. … The bullets which struck Roll were fired from the car, according to the police report of the case.”

Wheeler at first claimed the gunplay began when someone had fired at the cars from near a former saloon on the southwest corner before of the intersection. Later testimony at Roll’s inquest, however, indicated the streetcar’s riders were the only people to fire their weapons. At least a dozen shots were reported. There was no disagreement that the 200 or so people at the intersection had been throwing rocks and bricks at streetcars as they passed by.

A total of 31 people, all but one witnesses to the shooting, testified at the inquest into Roll’s death, the Illinois State Register reported.

The best-known arrestee was a man named Ralph Castles, the son of a former Springfield police chief. Castles, one of Wheeler’s special deputies, admitted firing three shots from his revolver out the car window, but said he thought he was firing into the air.

Because of the confusion, the coroner’s jury found that the shots that killed Roll were fired by “some person unknown,” and all four of the armed men were released from custody. The decision not to prosecute anyone for killing Roll became yet another irritant for labor supporters who, a month later, would begin a general strike that shut down businesses all over Springfield.

The city police pension board awarded Marie Roll, Noah Roll’s wife, a $50 per month pension. The issue of whether the railway company should also compensate the family, which included two young children, dragged on through the courts for five years. Mrs. Roll eventually received a $6,000 damage award.

The Officers Down Memorial Page, designed to remember police officers killed in the line of duty throughout the U.S., in its synopsis of Noah Roll’s death, states that Roll was “one of the first African-American officers to serve” on the Springfield Police Department. The basis for that statement is unclear — it may simply be an assumption based on the black-and-white photograph of Roll also posted on the Officers Down page — but it is incorrect.

Roll and his family were listed as white in the 1900 U.S. Census, and his record on findagrave.com (Roll is buried at Oak Ridge Cemetery) says he is white. In addition, none of the 100-plus mentions of Roll in Springfield newspaper files suggests he was African-American.

Roll was hardly an unknown person before his death.  In addition to his police service, during which he was mentioned in several articles, Roll apparently was a notable cook and was relatively active in local social circles. The society pages noted his attendance at several parties over the years, and his wedding and the funeral of his mother also were the subjects of newspaper items.

Local newspaper convention in the 1910s was to identify blacks as “colored” (more insulting characterizations were not uncommon). If Roll had been black, his social and family activities probably wouldn’t have been reported on in the first place, and in the unlikely circumstance that they were, Roll’s race certainly would have been specified.

Prior to his police service, Roll once even had to pull a gun on a drunken police sergeant who apparently intended to rape Roll’s sister. Nothing in the ensuing articles suggested Roll was African-American, although the writers did mention the presence of a young black servant in the household.

Note on age: Roll’s birth date is more of a mystery. The 1900 Census says Roll was born in January 1871, but then confusingly (perhaps a typo) states that he was 24 years old at the time. Roll’s tombstone gives his birth year as 1870, but findagrave says he actually was born in 1880. And the Register article on his death lists Roll as being 43 years old in 1917. It’s impossible to determine which is correct.