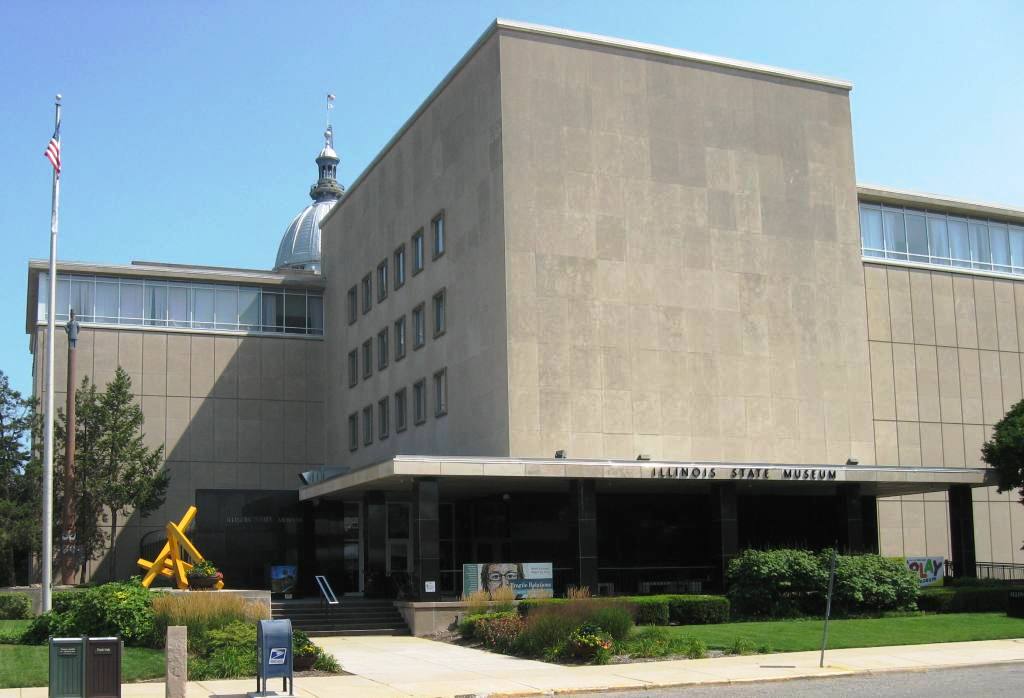 The Illinois State Museum began, unlikely as it seems, in New Harmony, Ind. Former museum director R. Bruce McMillan described the quandary that faced Illinois’ first state geologist in his article on the museum’s centennial , “The First Century,” published in 1977.

It all started in 1851 when the State commissioned its first geological survey by appointing Joseph Granville Norwood as state geologist. Although the survey was authorized, no work space was provided, so Norwood approached his friend and fellow geologist David Dale Owen in New Harmony. Owen agreed to share his facilities in this educational, cultural and scientific mecca on the Wabash. The first year, twenty-four counties in southern Illinois were surveyed, and by the end of 1853 a large collection of minerals and fossils had been assembled.

Norwood’s collection was moved to Springfield in 1855. The specimens were briefly housed in what is now the Old Capitol State Historic Site, but were transferred in 1856 to the original Illinois State Arsenal in the 400 block of North Fifth Street, where they stayed until the Civil War.

Here are other highlights from McMillan’s detailed account of the museum’s first 100 years.

*1853: Among Norwood’s assistants was Amos Worthen (1813-88), who went on to become Illinois state geologist and then curator of the new Illinois State Historical Library and Natural History Museum in 1877.

*1871: When the Civil War broke out, the collection was moved to Springfield’s Masonic Hall at Fifth and Monroe streets. In 1871, however, the hall burned, destroying the offices of the geological survey. “Fortunately,” McMillan wrote, “Worthen’s son Charles, asleep in the offices that night, awoke in time to rescue his father’s library and most of the collection.”

*1877: Thanks to legislative action, the state Natural History Library in Normal transfers part of its collection to Worthen’s new library and museum in Springfield.

It moved into a State House that was still under construction and would not be completed until 1884. Because of competition for space, the museum was moved several times, and then in 1887, when Worthen was out of town, Secretary of State Henry D. Dement ordered that the Museum be dismantled. Some cases were moved to a hallway on the main floor, but most of the materials — especially the geology collections — were dumped haphazardly in the basement of the Capitol. Worthen was emotionally traumatized and simply lost his will to live — he died a year later.

*1889: The State Historical Library is made a separate institution.

*1903: The Natural History Museum moves to the new State Arsenal north of the Statehouse.

*1906: Alja R. Crook (1864-1930) is named museum curator and begins the process of transforming the museum into a 20th-century institution. McMillan’s summary of Crook’s contributions:

He was central in getting a new facility (the Centennial Building, now the Howlett Building) built that housed the Museum, was an early pioneer in developing life-sized natural history dioramas, initiated a fine art program, helped organize the Illinois State Academy of Science and the Illinois Academy of Fine Arts, and was instrumental in seeing that the Museum’s governing structure was modernized. …

Coggeshall’s philosophy was that exhibits should “tell a story.” Major habitat groups were moved from the basement of the Centennial Building to the main Museum space on the fifth floor, and the Grover firearm collection was moved from the State Fairgrounds and installed in the Museum.

*1939: Deuel hires Virginia Eifert (1911-66) to edit the museum’s new monthly publication, The Living Museum. Deuel later described the genesis of the magazine in its own pages (as reported by John Hallwas in “The Achievement of Virginia S. Eifert,” written for the Illinois State Historical Society in 1978). 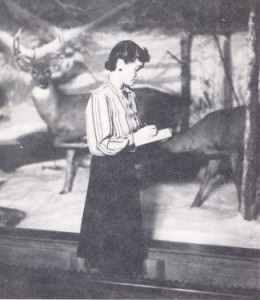 The Museum was scant of funds; it was without a printing appropriation, and had neither position nor salary for an editor. The prospect of continued support for such a paper was dim; but to Virginia this was a challenge, and she accepted the responsibility  and the uncertainties with quiet enthusiasm. Her first “subscribers” were a thousand names selected from the local telephone directory. the following month (May 1939) The Living Museum, a four-page leaflet on Illinois birds, beasts, and blossoms, appeared in mimeographed form, the contents and illustrations from the editor’s pen. It was an immediate success.

*1963: Following a period of unprecedented expansion under Deuel, the museum moved into its own 97,000-square-foot building on Feb. 4. “The new museum facility … was one of the premier state museums in the United States,” McMillan wrote. 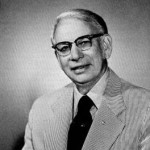 Deuel retired as director shortly before the new building opened. He was succeeded by Milton Thompson (1909-87), formerly the assistant director.

*1965: The state museum takes over the previously privately operated Dickson Mounds. A new building there opened in 1972. 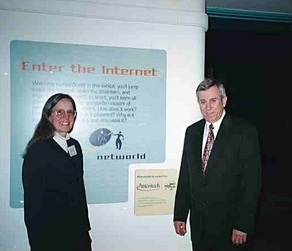 *1977: McMillan is promoted to replace Thompson as museum director.

*2006: Bonnie Styles, who had been with the museum since 1983, beginning as associate curator of anthropology and rising to associate director for science and education, is named museum director to succeed McMillan.