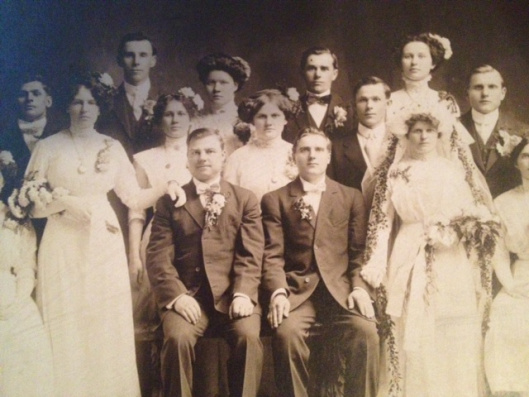 John & Tillie (Theophilia Rinkavich) Treinis on the right; John’s cousin “Big John” Treinis of Chicago and his wife on the left (all photos courtesy Lithuanians in Springfield, Illinois)

From Sandy’s Blog, News and Profiles, a section of Lithuanians in Springfield, Illinois:

Lithuanian coal-mining families in Springfield at the turn of the 20th Century had many hardships — and virtues — in common. Hard work, faith and determination were necessary just to survive. As for the hardships: in addition to the loss of infants and children that many parents suffered, children often endured the loss of a parent. Fathers died or were disabled in the mines. And more often than today, young mothers died, too.

After being widowed, spouses often remarried, creating a good number of blended families long before divorce was respectable or common. One of the oldest members of our Lithuanian-American community, Eleanora Treinis (Yuskavich), lost her mother, Tillie (Theophilia Rinkienve or Rinkavich), when Eleanora was just six. Born in Lithuania, Tillie (1888-1924) had arrived in Springfield around 1911 and was working as a laundress and boarding at the St. Nicholas Hotel in downtown Springfield when she met John Treinis (1883-1950), a coal miner, also born in Lithuania. who came to the U.S. in 1908. 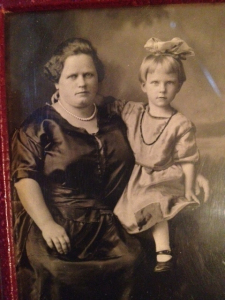 Eleanora Treinis as a little girl with her mother, Theophilia

After the couple married in 1912, Tillie continued working as a maid at the Leland Hotel, probably among other jobs. The cause of her death in 1924 is lost to time, but about 10 years after Tillie died, her widower John went on to marry Lithuanian immigrant Nancy Kensman (1895-1973), daughter of Antanas and Anna (Begaila) Kensman. Nancy previously had been married to a man named Nevada (Nevardoskus), giving Eleanora a stepbrother (John). What’s more, after Mr. Nevada, Nancy had been married to Ignatius Zakar, giving Eleanor a step-sister (Ceceilia) and another step-brother (Joseph) who had been born to Mr. Zakar by a previous wife.

This was an impressive amount of family “blending,” perhaps even for the time. However, unlike today when remarriages seem to occur quickly, while children are still young, resulting in step-siblings living together, that was not the case with the blended immigrant families I’ve encountered so far. It’s clear that widower John Treinis postponed re-marriage until Eleanora was mostly grown. Basic economics and the number of children who needed to be parented alone probably were determining factors in the timing of re-marriage.

Eleanora remembers her stepmom Nancy from her later teens, when she and her father lived in rooms above a tavern around 16th and Carpenter that Nancy owned. Years later, Eleanora made step-brother John Nevada, a World War II veteran, godfather to one of her daughters. What we know about widower father John Treinis is that he registered for the draft for World War I. He worked at the local Tuxhorn Mine and owned several of his own grocery stores, one at 1601 E. Converse Ave. and another at North Grand and Milton avenues.

Daughter Eleanora always helped her dad in the store, and the family quarters were behind the storefront. One night after closing, during the heart of the Depression when Eleanora was just 13, she and her dad were robbed at gunpoint. Fortunately, neither of them was hurt. 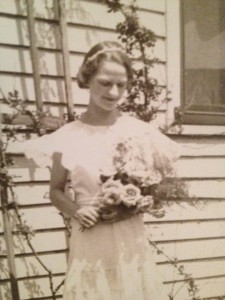 Eleanora Treinis, 14, in the wedding party where she met her future husband, John P. Yuskavich Jr.

Eleanora met her future husband, John Phillip Yuskavich Jr. at a wedding when she was just 14. They married in 1939 at St. Vincent de Paul Lithuanian Catholic Church. John was the son of Lithuanian immigrants John P., Sr. and Stella (Kuizin) Yuskavich. Not long after John P., Jr. and Eleanora married, John and his brother Anthony served in World War II.

Over the years, John, Jr. and Eleanora worked hard to support their own family of two girls. Eleanora was an elevator operator at the Hotel Abraham Lincoln, first at the back of the hotel, then, by promotion, in the main front elevator. She was also a packer at Pillsbury Mills, and later, a full-time homemaker for John and daughters Pat (Yuskavich) Towner and Mary Ann (Yuskavich) Wycoff.

John’s work history was particularly enterprising. After leaving school to mine coal, he worked at the Springfield International Shoe Factory, then in a steel mill in Indiana and the Depression-era Civilian Conservation Corps, then as a bus driver for the Springfield Mass Transit District, and finally for the U.S. Post Office in Springfield, where he started as a mechanic at the garage, rising to supervisor of the garage and drivers.

Here’s the really enterprising part: While working for the Post Office during the day, John managed two gas stations at night, and also owned a truck for which he hired drivers to pick up the Illinois State Journal and Register newspapers each day at 2 a.m. and 2 p.m. (respectively) and drop off bundles for home delivery by scores of paper boys.