Dr. Gershom Jayne (1791-1867), born in New York, moved to Sangamon County in 1819 and practiced medicine in the area for 47 years. When he arrived, he was the only physician that far north in Illinois. 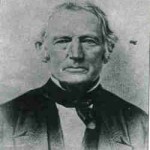 He was remembered in the 1881 History of Sangamon County, Illinois as a paragon of physicians.

Dr. Jayne was indefatigable. He often rode fifteen and twenty miles to see a patient, and some times as much as sixty miles, and that in all kinds of weather. Those who employed him could depend on his punctuality, notwithstanding the wide extent of his medical practice. He fulfilled his engagements at the hour appointed, day or night. His practical acumen was as marked as his fidelity. His judgment was rarely at fault. 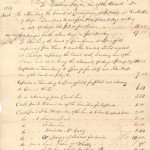 Jayne helped organize the Illinois State Medical Society and was one of the first commissioners of the Illinois & Michigan canal, and he also dabbled in land speculation, at one point owning the site that later became the village of Riverton.

Jayne’s “residence and shop” are listed as No. 23 on the reconstructed map of 1828 Springfield.

He is buried in Oak Ridge Cemetery.

This entry was posted in Early residents, Prominent figures and tagged Physicians. Bookmark the permalink.